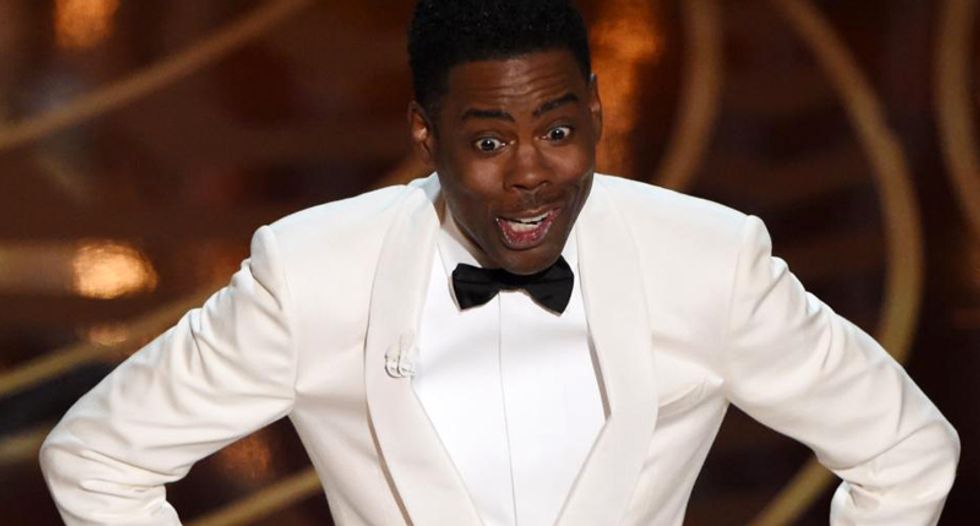 The unbearable whiteness of this year's Academy Awards nominations sparked the #OscarsSoWhite hashtag and boycott. But, for at least one Hollywood producer, the Oscars are too black!

Juergen Pichler Levine, a producer with over 900,000 Instagram followers, and an obsession with Sylvester Stallone, posted and then deleted  a meltdown on Instagram over the overwhelming presence of Black people at Sunday night's Oscars.  Luckily, it was screen grabbed by one of his Instagram followers, which we will get to below. The producer, who hails from Austria but lives in Texas-- a scary trajectory, to say the least-- posted a photo of awards-ceremony host Chris Rock talking to a Black person and went on a racist tear that sounds like it came straight from the mouth of Bruno, the fictional racist, anti-semitic, Austrian fashionsta character played by Sasha Baron Cohen:

Why is this Oscar Party as Black??? I am freaking out Obama get out and let us alone #Oscars#Suck#Academy#Awards#Mess#what the hell is this Comedy the Worst Avademy [sic] Awards in history Stallone will get his award and that's sure and it's not happened yet he deserves it #God bless America but not these monkeys. 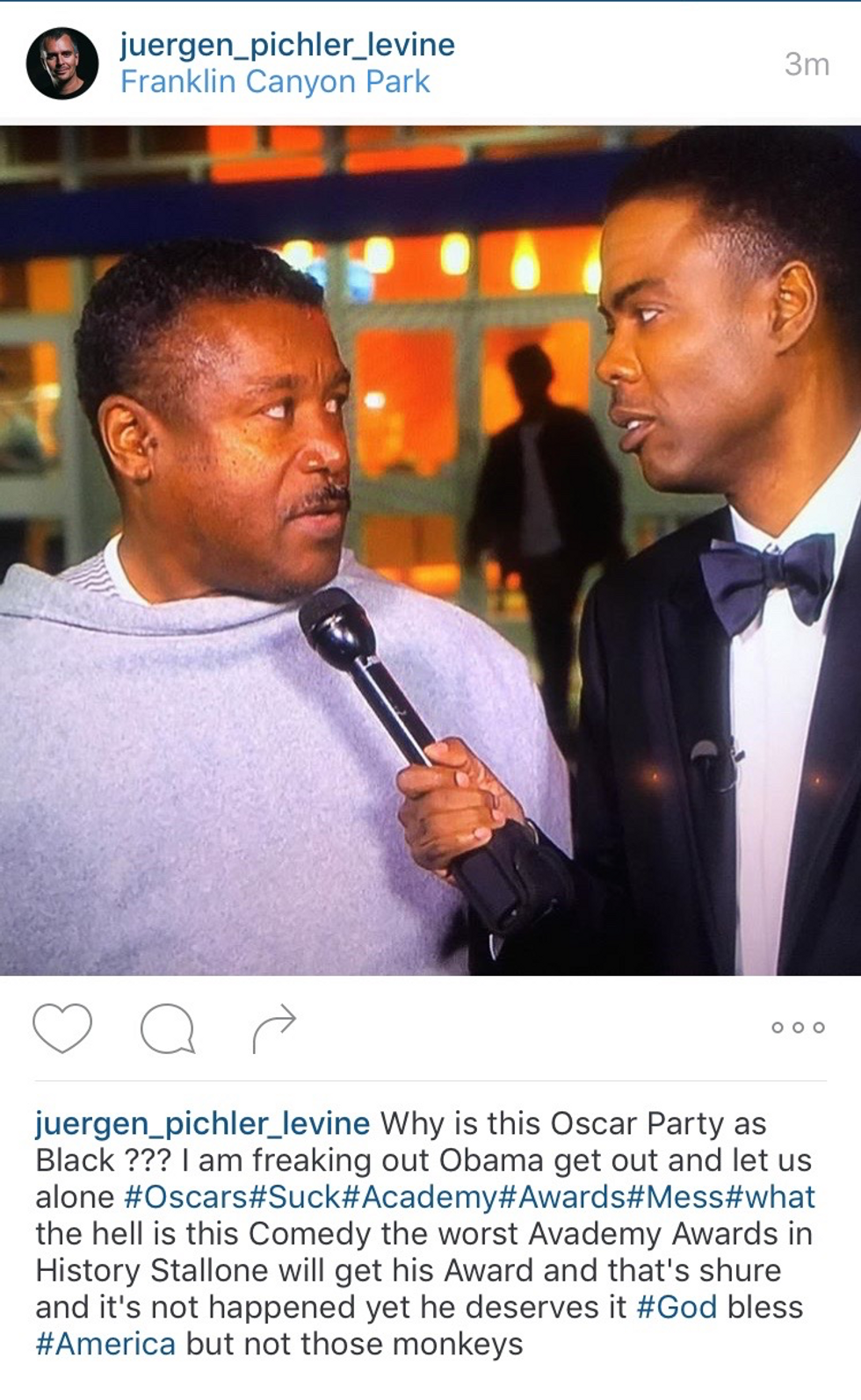 A translation note: people who speak English as a second language often use the word "as" for "so" and "let" for "leave. So, Pichler Levine was almost certainly asking, "why is this Oscars Party so Black?" and imploring the President to "leave us alone." Sure, one can only presume, is "sure."

Who is Pichler Levine, you ask? Up until now, he was perhaps best known for being featured in the San Francisco Chronicle article, "These Super Bowl fans are loaded with cash, arrive tardy" for arriving late to the Super Bowl where he had shelled out $14,000 for VIP seats. His jet was delayed for an hour and a half before it was given permission to land at the San Jose Airport. Though this would have stressed out a less zen man, the unintentional self-parody of an out of touch, filthy rich jetsetter,  reportedly said of his late arrival, “We could give a f**. We are rich.”

But Pichler Levine is so much more. According to his Instagram account he is a "Peacekeeper - Pilot - Producer - Composer." He is also a financier, and, according to a press release from October 2015, "[w]hether he was producing music or building and expanding the largest security firm in South America, Mr. Pichler Levine has ensured that each company prosper." Security firm in South America! I'm loving him even more!

His latest project, the film "Boys of Summer Ave," is especially exciting.

Four boys receive information that leads them on a hunt for a rare treasure in the woods, but as they venture on their journey they face obstacles that make them realize this treasure may not be so valuable after all.

The Boys of Summer Ave. is a coming of age story that centers around four boys in Ohio during the nineteen eighties. With racial and societal tensions flaring, the boys seek to keep their tight knit group together by retrieving a coveted baseball worth a million dollars in order to save their neighborhood and their friendships. The narrative explores the themes of love, honesty and accountability while infusing wit, humor and suspense for a laughable and heart warming ride.

I'd be remiss to not include that he is a major arms enthusiast, as evidenced by his photos of guns, and this one of his "cutie!' 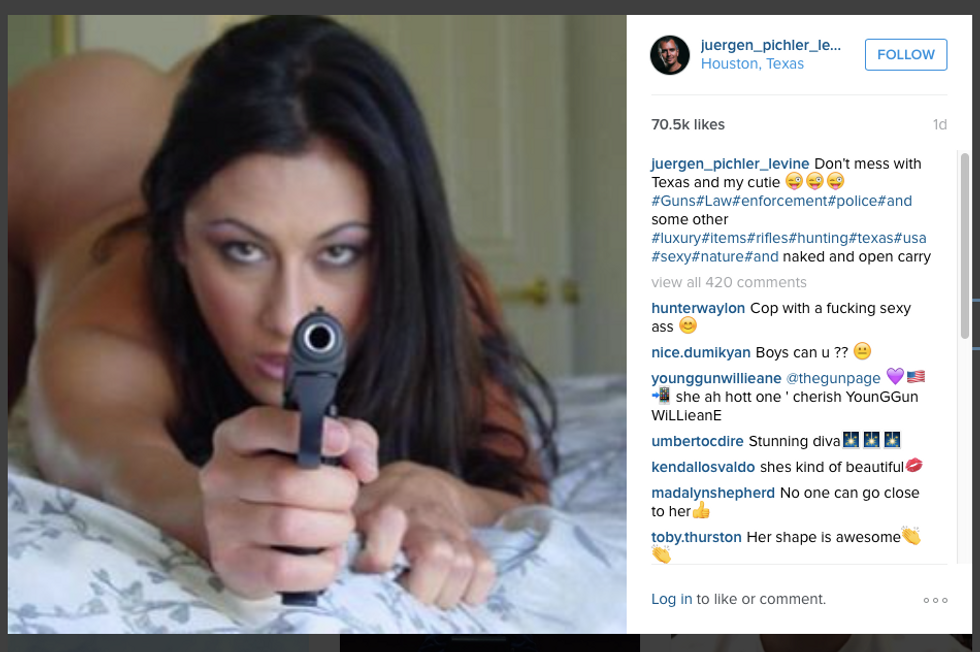 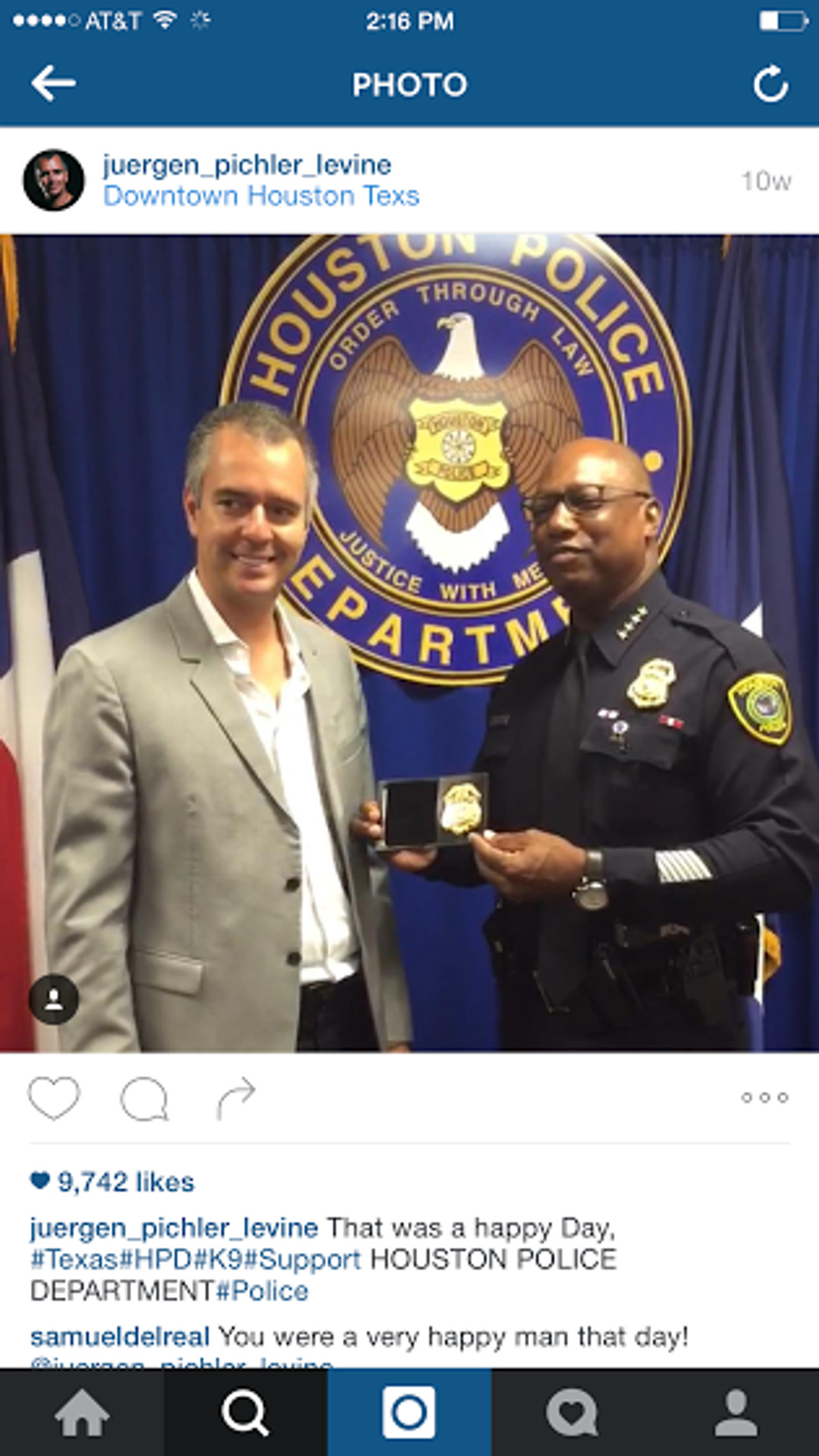 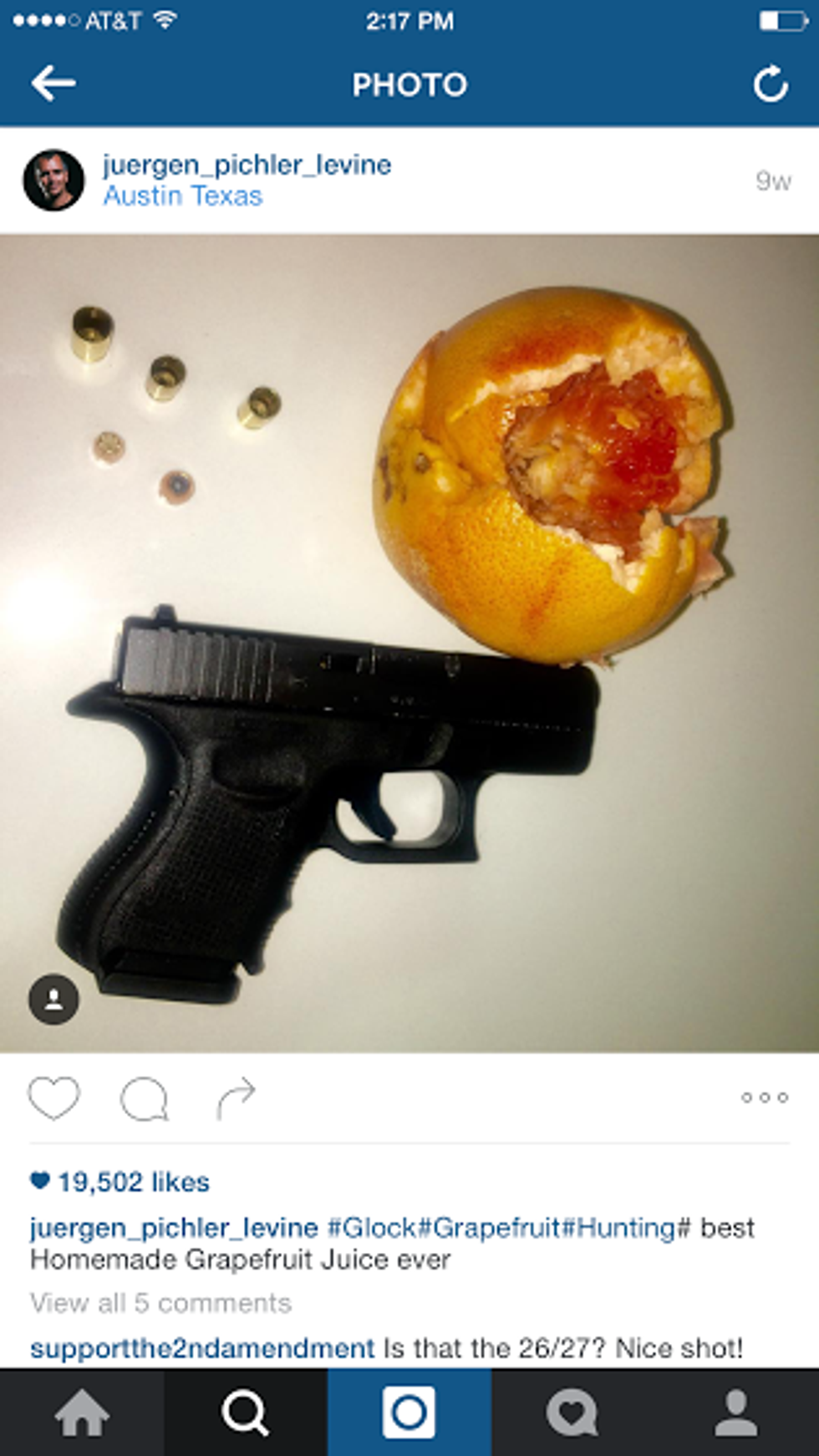 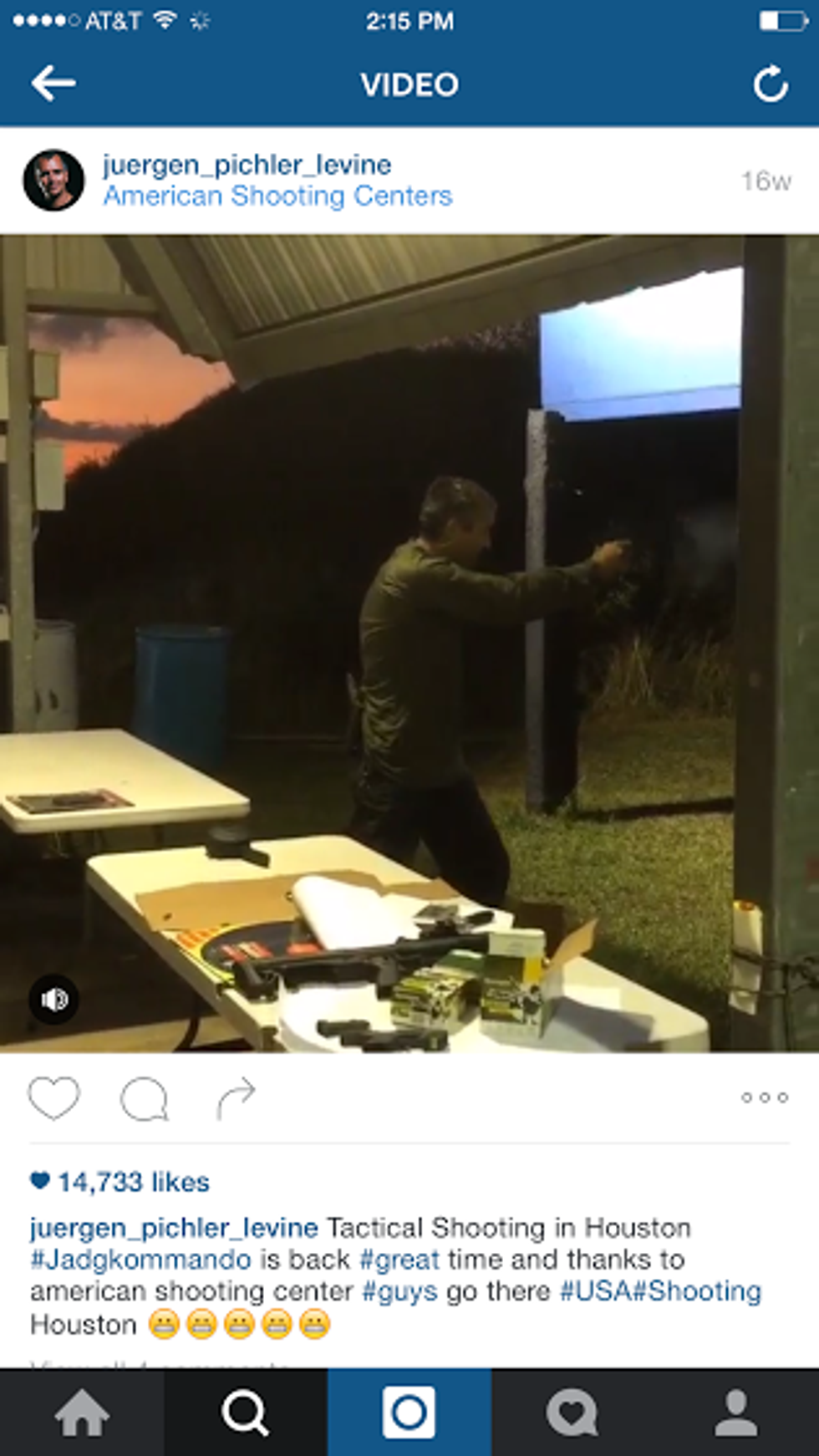 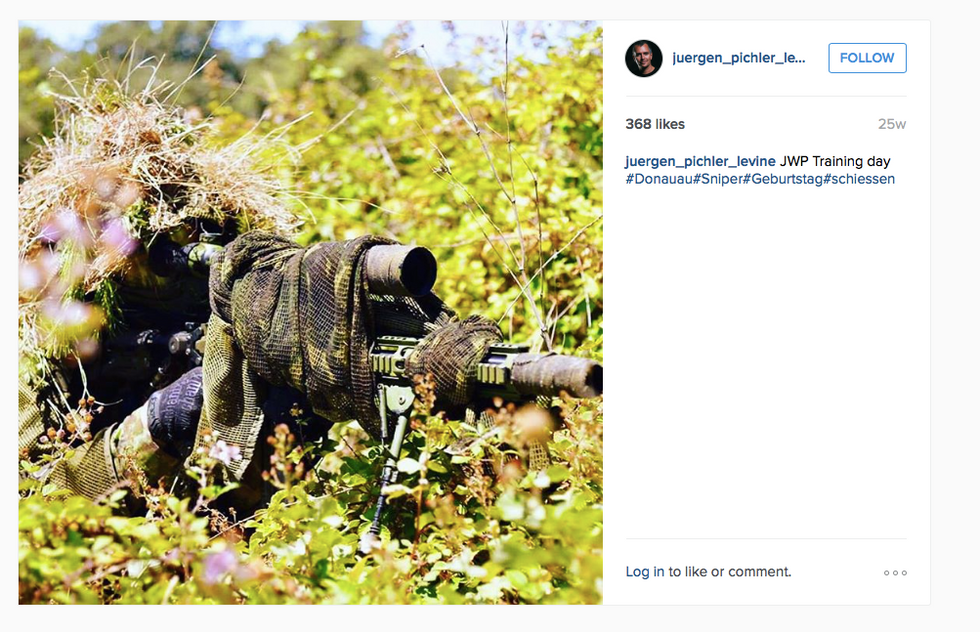 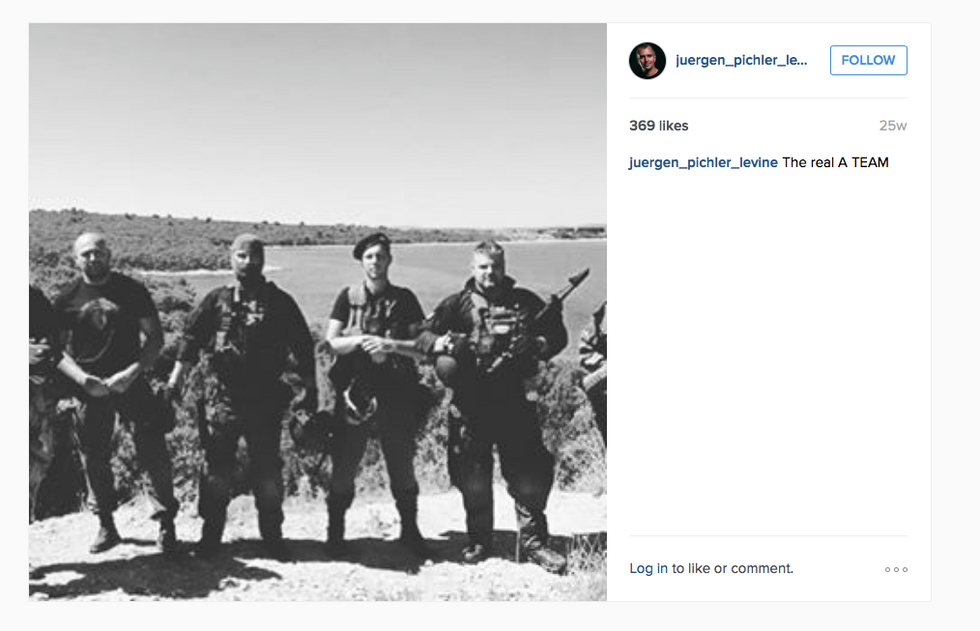 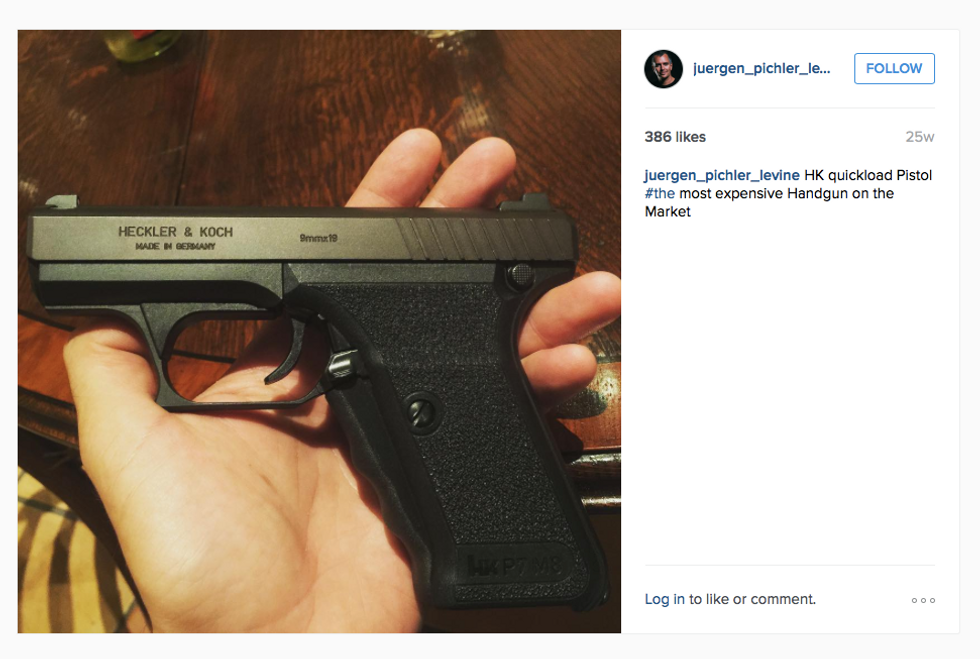 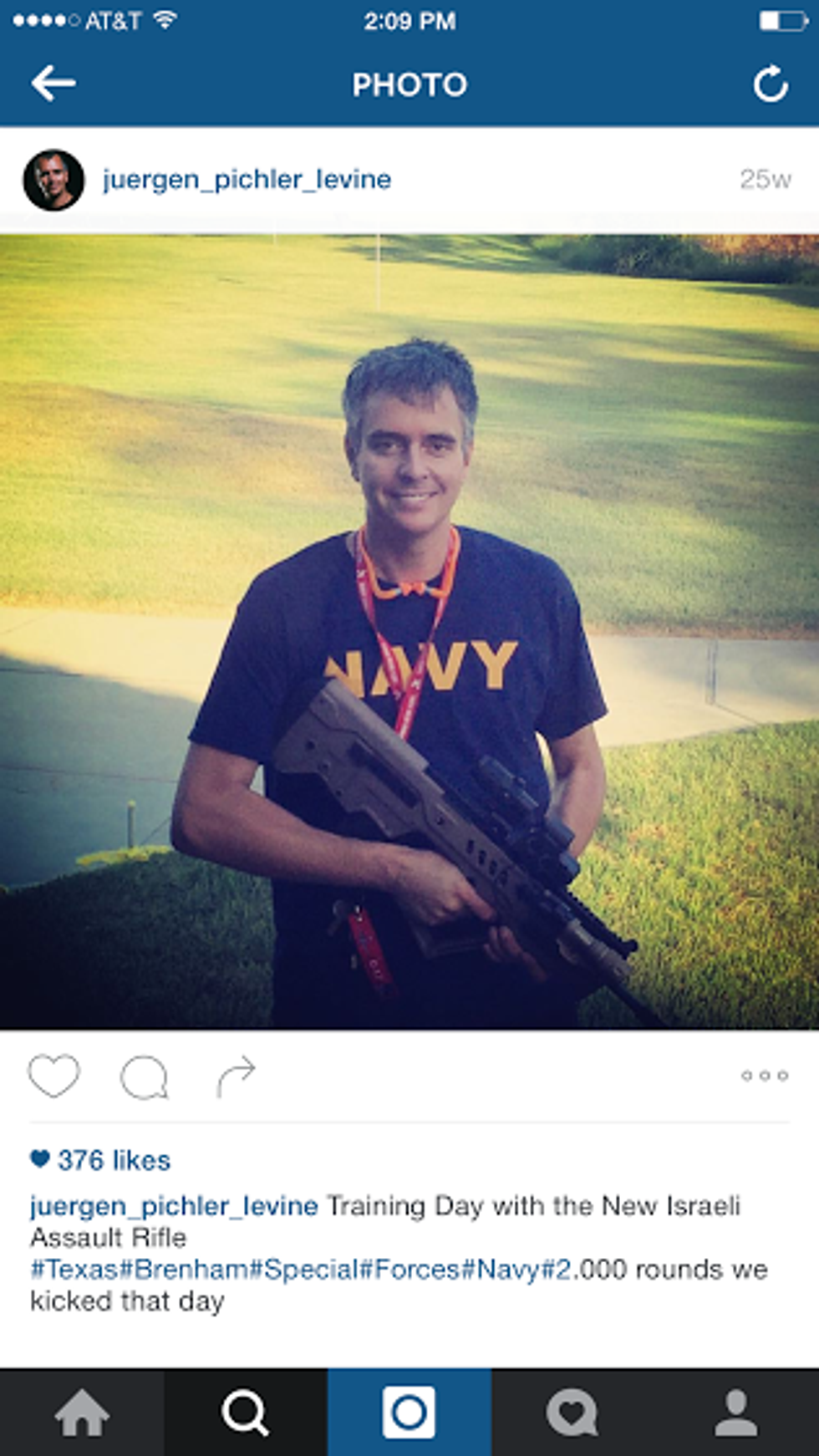 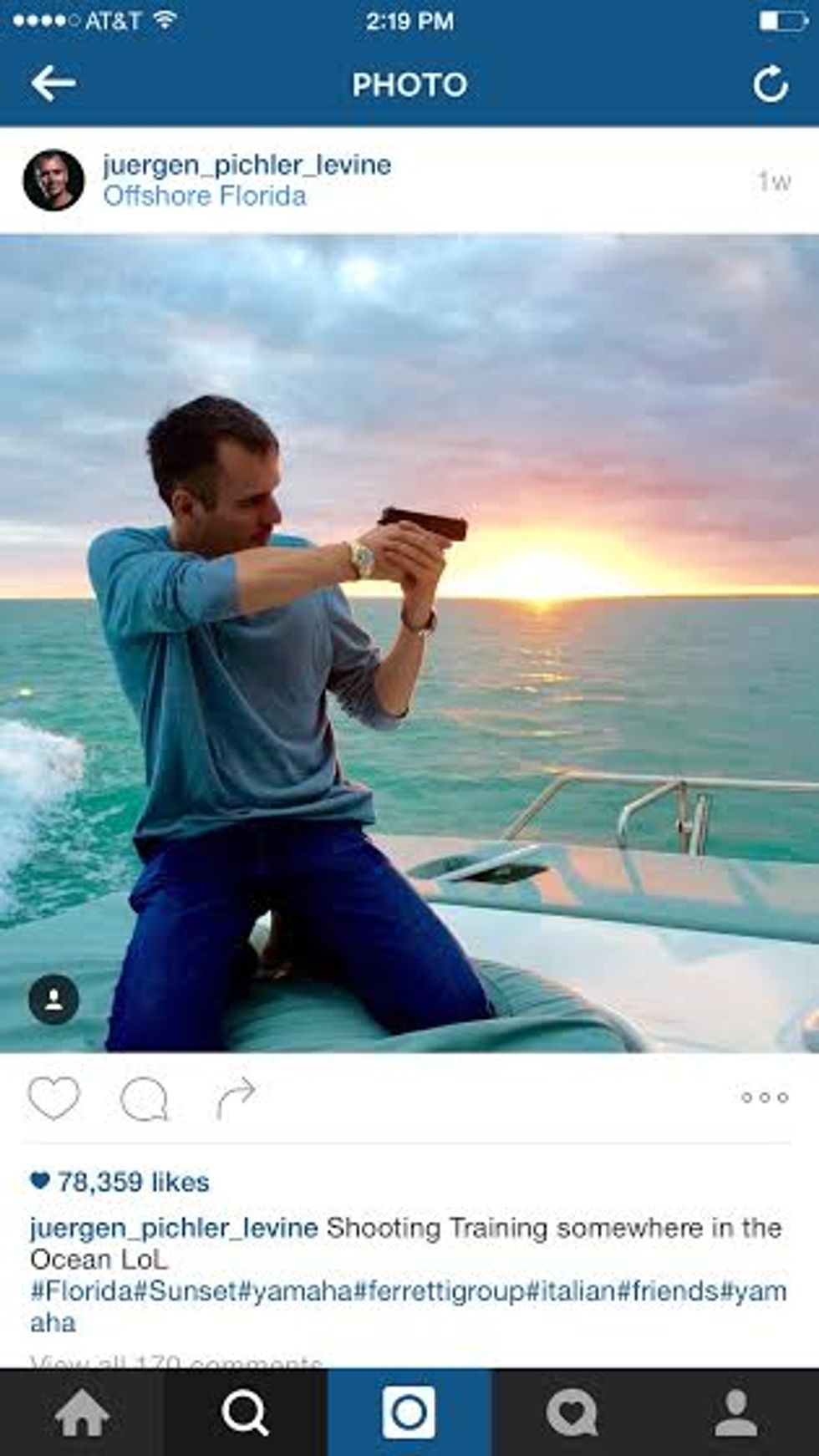 But back to his take on the Oscars being so Black. In a rare moment of self-awareness, Pichler Levine deleted his racist meltdown. Not, however, before Fernando Sosa, the Mexican-born, Florida-based artist behind the infamous Donald Trump butt plug, took a screenshot, which he shared with me. To be fair, Sosa isn't a Pichler Levine fan. He just followed him back on Instagram. Pichler Levine and other racists must be furious that, once again, a Mexican has done the job that should have gone to an Amurrican: taken a screen grab!

The renaissance man that is Pichler Levine posted another Oscars-related image which he has not deleted from Instagram (as of 2pm Monday)  from Elton John's Oscars party, which featured Mariah Carey and Sir John himself. Sosa noticed that when Pichler Levine posted the photo originally, he had tagged himself as the man on the left in the cowboy hat. He deleted that version and uploaded this one, in which he is not tagged. 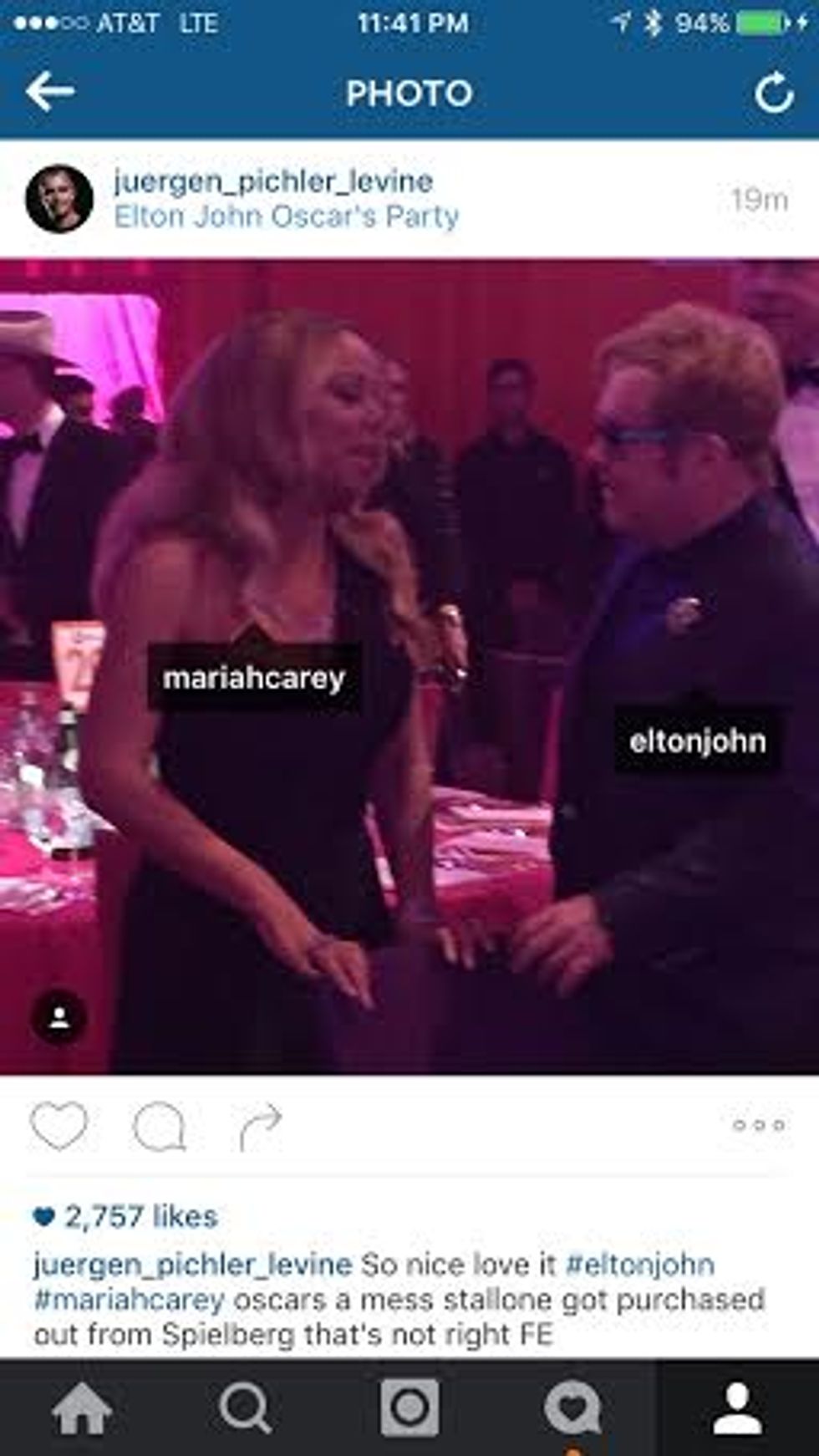 As you will note, the producer is still enraged over Stallone's loss for his role in Creed, after the Oscar for best supporting actor went to Mark Rylance for his performance in Spielberg's Bridge of Spies. As they say, a picture is worth a thousand words. So, here are some images of Sly, which Pichler Levine has posted. 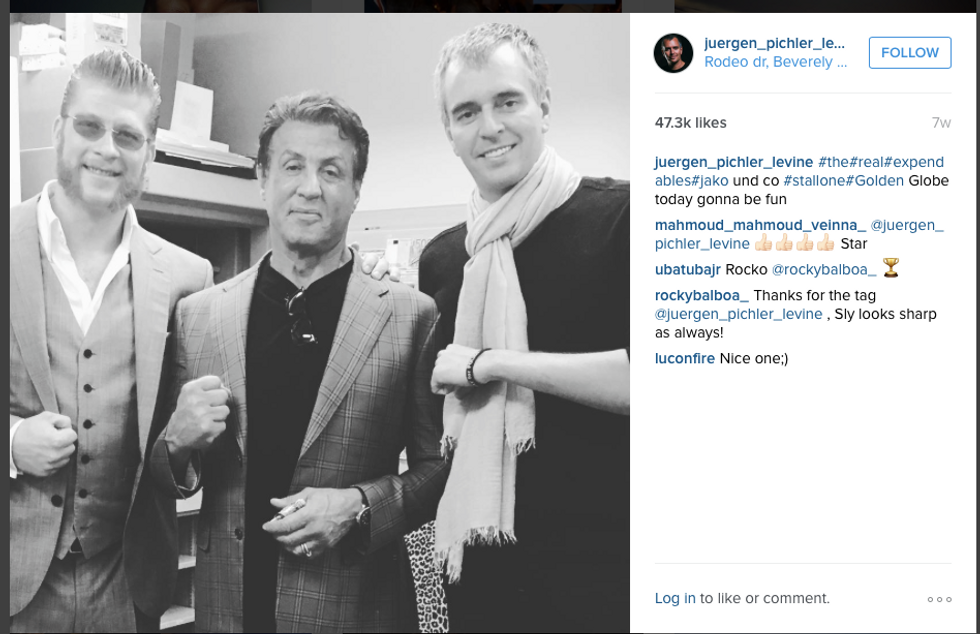 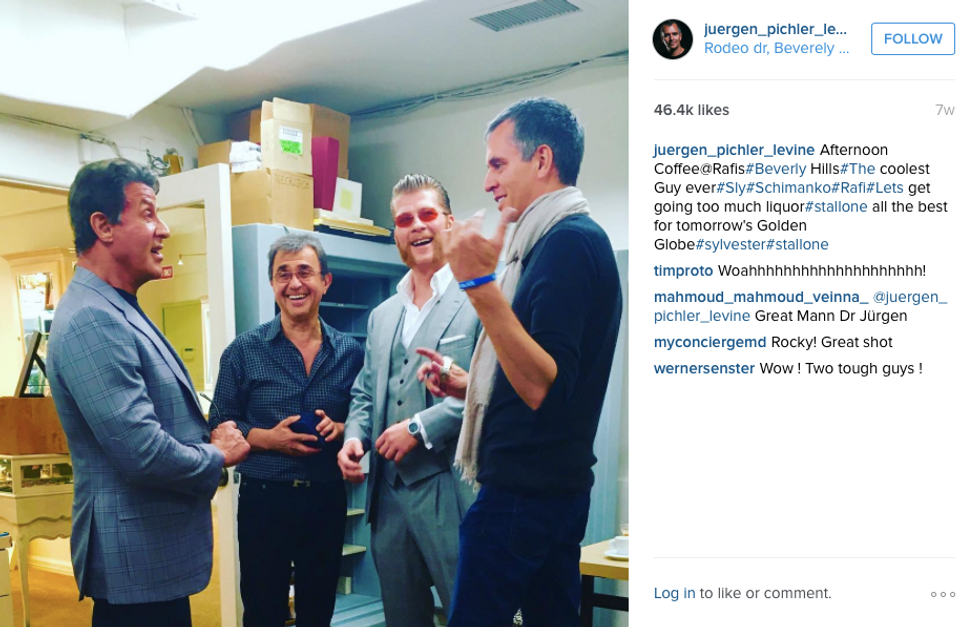 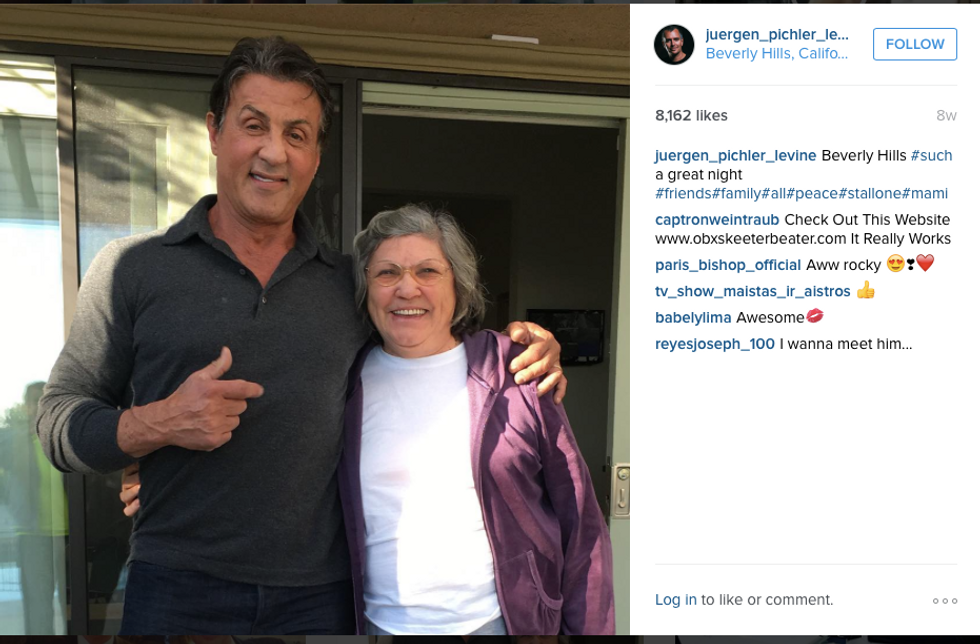 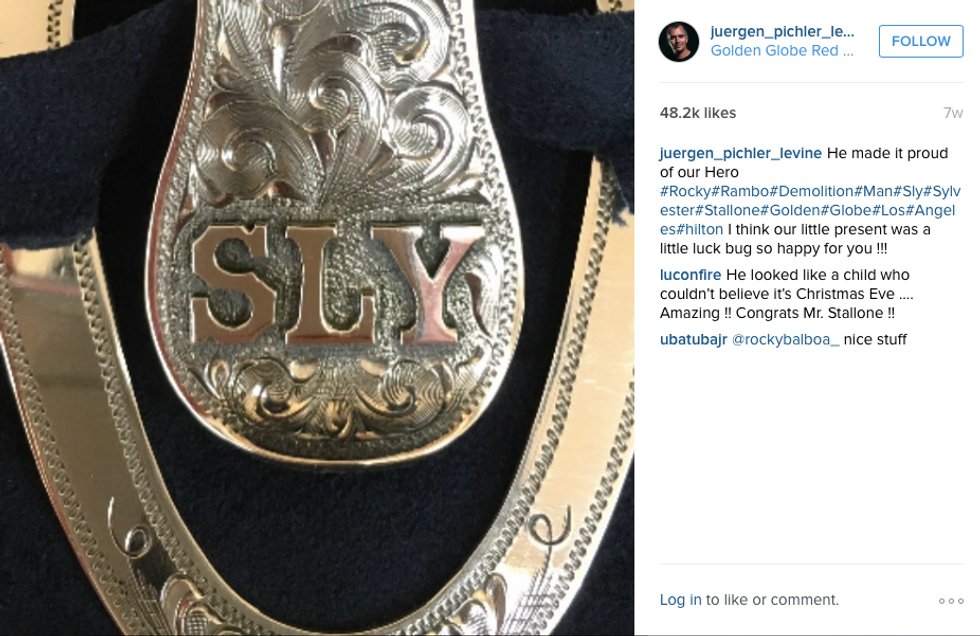