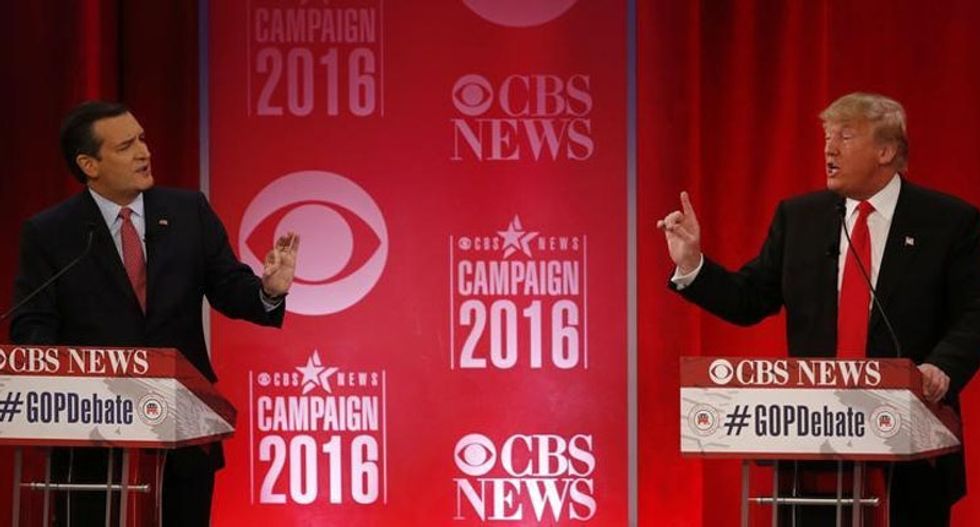 Do they back the rage-infused, turn-back-the-clock tone of Trump, or perhaps his conservative, evangelical rival, Ted Cruz? Or do they favor the sunnier, more inclusive appeals of emerging establishment favorite Marco Rubio or Ohio Governor John Kasich.

Not only will the answer decide the Republican nominee, it may well change what it means to be a Republican. The party is enduring a schism between those who want to work within the system and those want to tear it down.

“The GOP is broken [and] may not be salvageable,” said Juleanna Glover, a Republican consultant in Washington who had supported Jeb Bush, who dropped out of the race on Saturday after a poor showing in South Carolina. Trump’s support, she said, shows that one-third of the party’s voters “want out.”

Bush, the former Florida governor, had been part of that camp of Republican establishment optimists. Ben Carson, the right-wing retired neurosurgeon, was never a factor in South Carolina and could be the next to exit.

That leaves a Final Four, of sorts, as the campaign maintains a southern focus for a string of contests on March 1 that include Georgia, Texas, and Virginia. Trump and Cruz will be the favorites in many of them, with Rubio, a senator from Florida, and Kasich seen struggling until the primary schedule shifts to more hospitable regions, including their home states.

Rubio finished in a near tie for second in South Carolina with Cruz, rebounding strongly from his stumble in New Hampshire, where he finished fifth and was criticized for being overly scripted. He stands to benefit the most from Bush’s departure as the perceived establishment standard-bearer.

Billionaire real estate developer Trump has racked up wins in two of the three early-voting states by channeling the disillusionment many Americans, especially the white working-class, feel with stagnant wages, globalization, the influence of corporate money in politics, and a gridlocked government.

Cruz, a senator from Texas, has courted libertarian and religious voters who believe their values are under assault.

Both strike a tone of alarm, largely about the porous U.S. southwest border and the threat of Islamic State. And both often offer a paean to the past, asking voters to envision a time when the country appeared to be more prosperous and homogenous.

Some Republicans fear that the appeal of either candidate will simply be too narrow.

“It’s a dangerous direction for us to go in,” said Chip Felkel, a Republican strategist in Greenville, South Carolina.

“I’ll argue with anyone that a Cruz nominee or Trump nominee is someone who can expand this party and help us beat the Democrats.”

Alternatively, Rubio and Kasich bill themselves as healers of America’s fractured politics. On the stump, Rubio speaks of uniting the quarrelsome factions of the Republican Party, and has embraced diversity in a way that his competitors have not.

After the South Carolina results rolled in, Rubio, a Cuban-American, stood with South Carolina governor Nikki Haley, the daughter of Indian Sikh immigrants, and Tim Scott, an African-American Republican senator from the state.

“This country is now ready for a new generation of conservatives to lead us into the 21st century,” Rubio said.

Rubio has vowed to grow and unite the party and broaden its appeal among younger Americans.

At a rally on Friday in North Charleston, Adam Mandel, 57, was approving of Rubio. “He seems to be a little bit more willing not to go to extremes,” Mandel said.

The contrast between Rubio’s events Friday and those of Trump and Cruz was vivid. Trump, just a day after getting into public spat with Pope Francis, told an apocryphal story about a general who executed Muslims using bullets dipped in pig blood. Cruz‘s rally featured Phil Robertson, star of the reality show “Duck Dynasty” who has condemned homosexuality as sinful.

But some Republican voters worry that Rubio, who, like Cruz, is a first-term senator, and Kasich, who has labeled himself “the prince of light and hope”, aren’t tough of enough to usher in the radical change they crave.

“I think Rubio is too easily influenced by the establishment,” James Vinson, 70, a Cruz supporter from Charleston said. “I think he’ll be their guy."