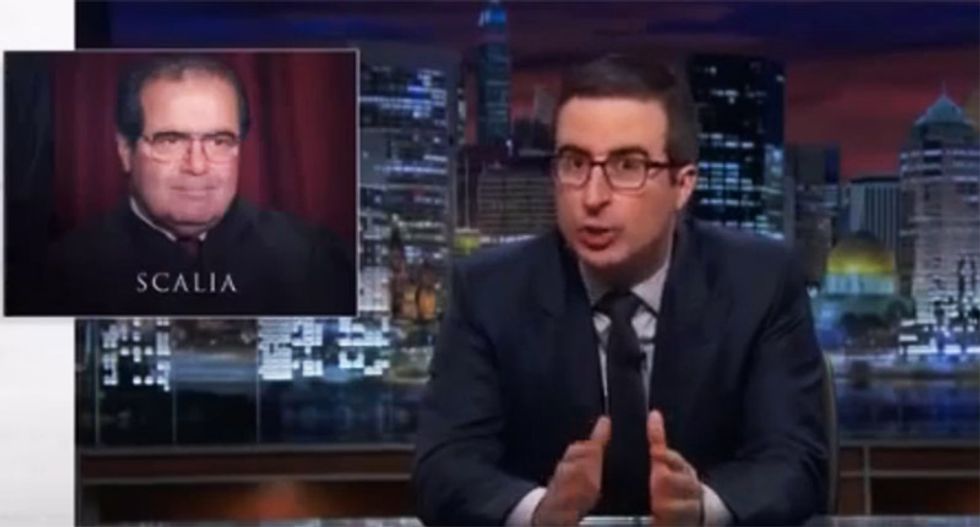 HBO's John Oliver made his triumphant return to Sunday night and immediately went after Republicans for a saying they will refuse to consider any nominations to replace Supreme Court Justice Antonin Scalia.

“Well, that does not bode well because Mitch McConnell is actually pretty good at delaying things for people—whether it’s legislation, court appointments, or orgasms,” explained Oliver while posting a photo of McConnell's face. "Believe me, if you ever need to ‘delay, delay, delay’ an orgasm, just picture this face and I guarantee you nothing will happen -- possibly for the rest of your life.”

Oliver then turned to the “strange, unwritten rule” known as the "Thurmond Rule" -- named after the late South Carolina Senator Strom Thurmond -- which posits that no president should be allowed to make a lifetime appointment to the bench within the last six months of his term.

“Yes, the Strom Thurmond Rule,” Oliver said before suggesting that he thought it might be about paying "hush money required to keep your secret family a secret" --referring to Thurmond's out-of-wedlock child -- or "how racist an old person is allowed to become before their age is no longer an excuse.”

Oliver cautioned McConnell against using the informal rule -- which he termed "bullshit" -- by noting that McConnell himself had previously dismissed it.

“Our Democratic colleagues continually talk about the so-called ‘Thurmond Rule,’ under which the Senate supposedly stops confirming judges in a presidential election year," McConnell said in a 2008 clip from the Senate floor. "This seeming obsession with this rule that doesn’t exist is an excuse for our colleagues to run out the clock on qualified nominees who are waiting to fill badly needed vacancies.”

“Yes, it seems the ‘Thurmond Rule’ is a bit like God: when things are going your way, you don’t bring it up a lot.  But as soon as you’re in trouble -- it is all that you talk about,” he smirked.

Watch the video below via The Daily Beast: