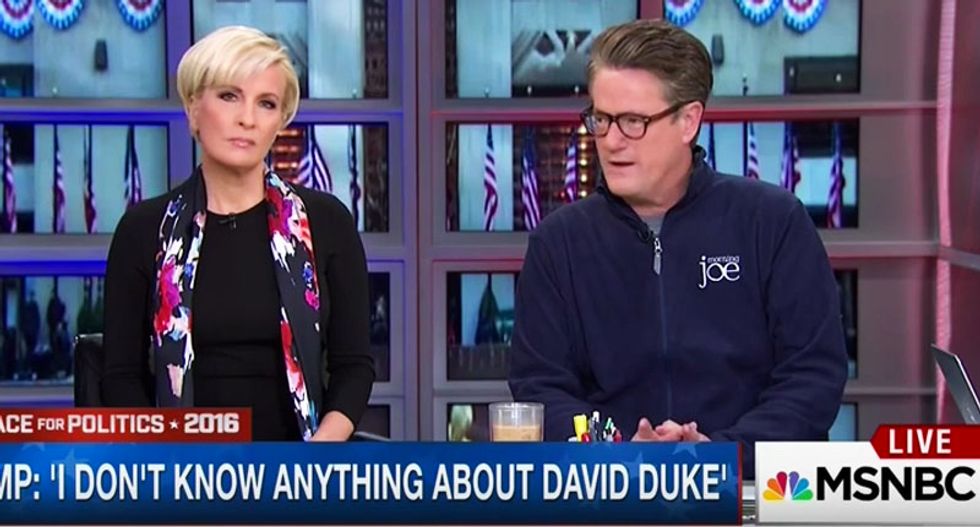 The campaign of 2016 GOP presidential candidate Donald Trump was dealt a major blow Monday morning when one of his biggest boosters, MSNBC host Joe Scarborough, stated that Trump's failure to disavow the KKK on Sunday was "disqualifying."

Appearing on CNN Sunday morning, Trump was asked by host Jake Tapper if he would disavow the support of former Klan leader David Duke and other white supremacists groups.

Trump stated that it would be "unfair" to judge the groups without doing more "research" on them.

“Well, I have to look at the group,” Trump replied. “I mean, I don’t know what group you’re talking about. You wouldn’t want me to condemn a group that I know nothing about. I’d have to look. If you would send me a list of the groups, I will do research on them, and certainly I would disavow if I thought that there was something wrong.”

“You may have some groups in there that are totally fine, and it would be very unfair,” Trump added. “So, give me a list of groups and I’ll let you know.”

"That’s disqualifying right there,” Scarborough said. “It’s breathtaking. That is disqualifying right there. To say you don’t know about the Ku Klux Klan? You don’t know about David Duke? And the most stunning thing is … this isn’t buying him a single vote. Is he really so stupid that he think southerners aren’t offended by the Ku Klux Klan and David Duke?”

The loss of support of Scarborough is a stunning reversal for Trump, with the MSNBC host considered one of his biggest boosters.

Last week, Scarborough's cozy relationship with the New York billionaire came under scrutiny when an open mic picked up the host promising to make Trump "look good" during an interview.

On Monday morning, Trump attempted to blame his response on a faulty earpiece, saying he couldn't hear the question clearly.

A cybersecurity official at the Department of Homeland Security wants to see a report on Georgia's voting machines that a judge has ordered sealed -- which has fueled right-wing conspiracy theories about election fraud.

U.S. District Judge Amy Totenberg ordered the report by a computer security expert to remain sealed to avoid fueling election conspiracies -- but her order has backfired, reported The Daily Beast.