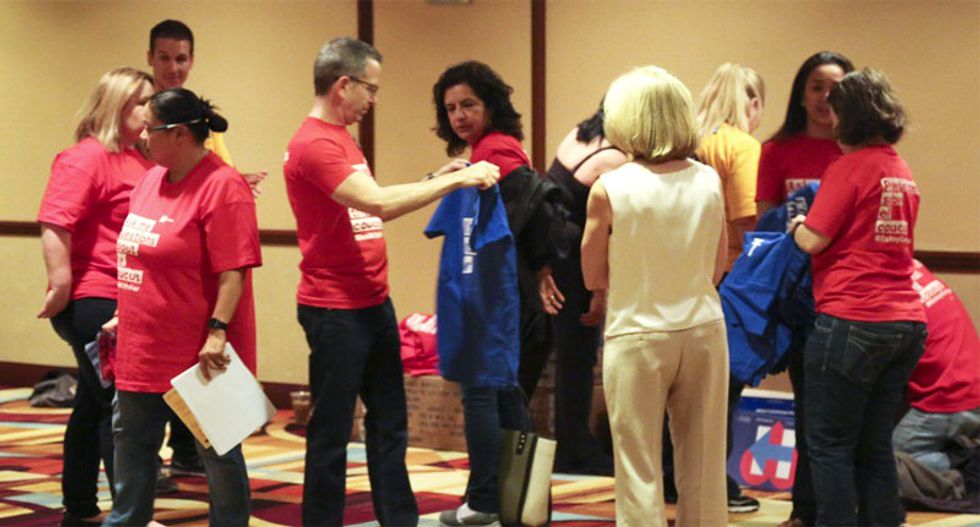 Representatives for the National Nurses union which has thrown its support behind Vermont Sen. Bernie Sanders are accusing the Clinton campaign of trying to hoodwink Nevada caucus-goers by wearing the red t-shirts normally associated with the union.

In a series of photos tweeted out by Executive Director of National Nurses United RoseAnn DeMoro, volunteers can be seen receiving red t's carrying the logo, "I'm with her."

National Nurses United, with members in every state, 185,000 total, announced they were backing Sanders in August of last year, with DeMoro stating, "Bernie Sanders aligns perfectly with nurses on the most critical problems facing our nation, from income inequality to guaranteeing healthcare to all to holding Wall Street and corporations to account to opening the doors to college education for everyone to racial justice to the climate crisis."

Union members are easily identified at Sanders rallies sporting bright red t-shirts, with some members wearing special ones with "BeRNie" screened over a heart.

Some opponents of Sanders have criticized the union's affiliation with the Vermont senator, characterizing it as a SuperPac -- which Sanders has steered clear of.

**UPDATE**: In a statement to Raw Story, National Nurses United spokesperson Chuck Idelson said the red tees were not a first for Clinton supporters, and that when nurses attending the caucus pointed out the Clinton people to the press, they immediately changed back into Clinton blue tees.

At a large caucus at the New York casino Clinton staffers were wearing red t-shirts, despite the fact that Clinton has branded blue the entire campaign. Red is if course associated with National Nurses United, has been our color for years and well known in nurses campaigning for Sanders in red scrubs, red shirts, and even our red Bernie Buses that have been prominent in early voting states.

When our nurses walked into the room with cameras and a couple press the Clinton staffers ran over to the corner and quickly changed to blue shirts.

In our view they are trying to exploit the credibility of the nurses (just as Sanders is viewed as the most trusted candidate) to deceive voters walking into the caucuses.

See photos from Nevada below: