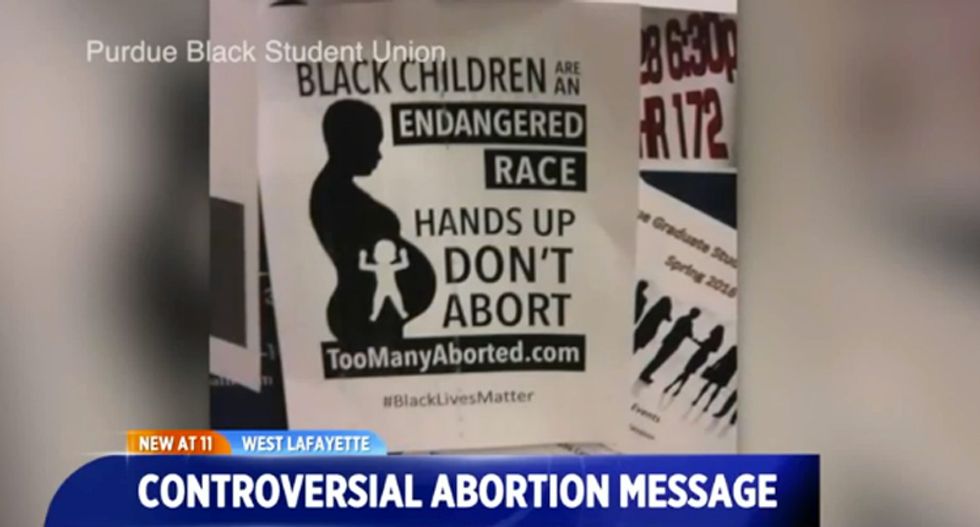 A student group at Purdue University has issued a written apology for co-opting the Black Lives Matter slogan, "Hands up, don't shoot," by replacing "shoot" with "abort" for an anti-abortion campaign during Black History Month.

Writing in the Purdue Exponent, a representative for Purdue Students for Life apologized for the campus crusade against abortion that included writing on sidewalks with chalk and pasting flyers on poles claiming abortion makes black children an "endangered race."

"First and foremost, we would like to apologize for the pain this campaign has caused. It was never our intent to shame or condemn any group of people, either the black community or post-abortive women, or to make any person feel discriminated against," they wrote. "Rather, we sought to draw attention to how abortion inflicts disproportionate harm onto the black community (including both its born and unborn members) through factors such as misinformation, targeting from the abortion industry, discrimination and racial inequality."

Turning a woman's right to choose into a racial issue has long been a tactic of anti-choice activists who have accused Planned Parenthood and other abortion providers of being "hostile" towards the black community.

"The flyers were posted to draw attention to a uniquely cruel way the black community has been discriminated against by the abortion industry through generations of mis-education and deliberate targeting," the apology stated. "We spoke of black children being 'endangered' not because black women are hostile toward children, but because Planned Parenthood is hostile toward them. We want to protect black lives."

"What it does is it connects two different types of pain in a way that doesn’t cause any healing," student Chanel Beebe told CBS4. "You diminish the value of the Black Lives Matter movement."

According to members of the Purdue Black Students Union, no one from the anti-choice group approached them about making blacks the focus of their campaign -- coinciding with Black History month -- and that they failed to identify themselves in their guerrilla campaign.

"They didn’t put their names on it," said student  Sydney Tomasko. "They didn’t try to attach themselves to this message that they were spreading around campus."

According to the anti-choice group, "We regret and apologize for the way our message was delivered," but they still stand by their core message that abortion is a "gross civil rights injustice" in the black community despite the fact that choosing to have an abortion is purely up to the woman.

Watch video below from WTTV: