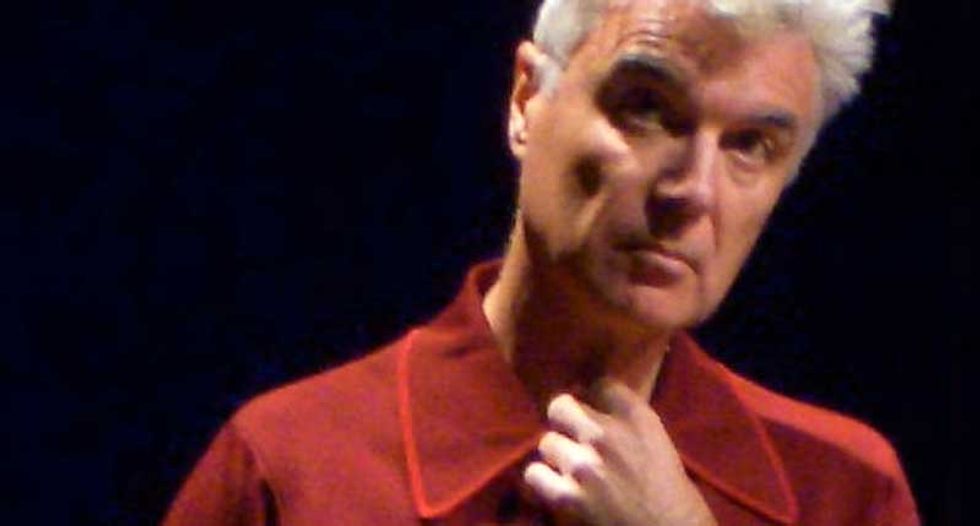 In a wide-ranging essay on his blog, Talking Heads founder David Byrne suggests that our social media culture -- combined with a corrupt political and economic system -- is what allows front-running GOP presidential candidate Dolald Trump to get away with "his lies and bullshit."

According to the legendary art rock icon, "Lately it seems that anything that contradicts a passionate belief has become invisible," which he attributes to a deliberate avoidance of the “reality-based community.”

"The avoidance of a 'reality-based community'—as the Bush advisers derisively called it—is truly puzzling, but the other reasons why folks are drawn to Trump and others like him are, in my opinion, pretty clear," he wrote. "One reason why folks on either side of the party line are angry with how things stand is that both sides sense that Congress is beholden to the money of special interests and consequently the voice of the people goes unheard. Democrats might blame the Koch brothers and I’m sure that conservatives blame some outside influences, too. The decision to bailout the banks doesn’t sit right with some, and others feel that the government wants to regulate their private lives."

Byrne focuses on social media which creates an "echo chamber" of sorts -- with users staying within their own bubble with like-minded friends and strangers with whom they agree.

"The problem with Facebook and Twitter is that those platforms mostly present a point of view that you already agree with, since you only see what your 'friends' are sharing," he wrote. "The algorithms built into those social networks are designed to reinforce this natural human tendency and expand upon it—if you like this, you’ll like this. The networks reinforce your existing point of view in order to give you more of what you like, as that will make you happy and keep you on the network — and, in turn, more ads can be accurately targeted your way. You remain blissfully happy 'knowing' or, rather, believing, more and more about less and less."

"Once you’ve surrounded yourself with only one point of view, soon that point of view is all you hear," he adds.

Byrne applies that belief to the rise of Trump, whose nonsensical blustering and simplistic answers to complicated problems have not kept him from continually moving up in the polls.

"What about the folks who will never hear that Trump is full of shit when he says he self-finances his campaign?" he wrote before answering his own question with, "See no evil hear no evil."

The Talking Heads frontman adds that he is not immune to the same influences that shape how he sees the world.

"I’m probably as guilty as anyone, though I do scan about four to five different news sources during my daily browsing. While none of them are presented to me via a social media feed, the newspapers themselves are skewing more and more towards likable headlines, topics and subjects. Am I then supposed to force myself to read the Post and watch Bill O’Reilly from time to time?" he wrote. "Like most people, I gravitate to others who probably share many of my viewpoints… but not always. If it’s not already been filtered and combed through, sometimes we discover that friends hold some surprising viewpoints. And because they’re friends—or at least because I respect them—I’ll take those ideas on board, for a little while at least."