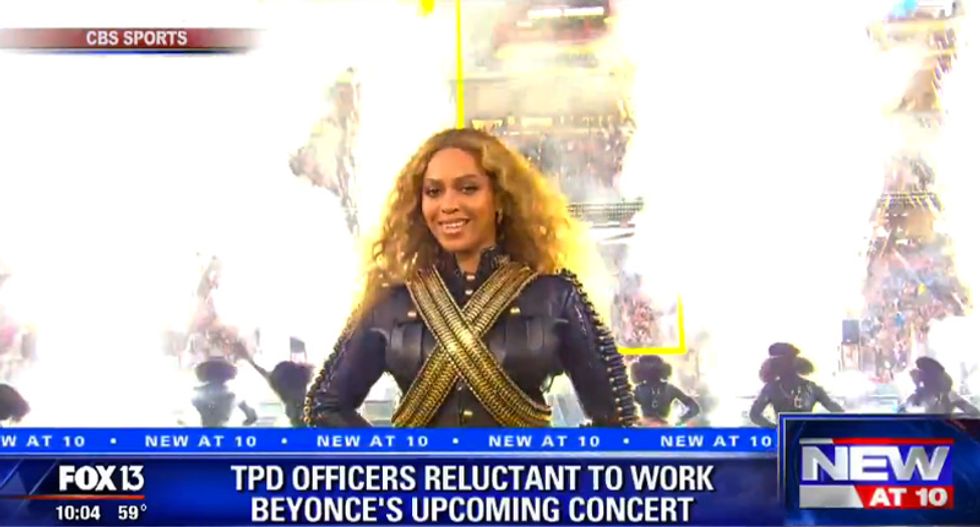 Beyoncé's show at Raymond James Stadium in April is expected to be a sell out but -- for the moment at least -- there won't be any police on hand to control the crowds because Tampa cops are refusing to sign up to work at the event, reports Fox 13.

A sign-up sheet for the April 29 event has been posted since tickets went on sale, but has so far remained blank -- possibly in retaliation  for the singer's performance during the Super Bowl halftime which some police officers felt was anti-cop.

Typically for special events, off-duty officers sign up to pick up extra pay, but  no one seems interested in working when the pop star hits town.

According to Tampa Police Department spokesperson Steve Hegarty, he's not sure if the lack of willing officers is related to the controversial performance, and that the department would assign officers if none volunteer.

“We’re going to staff it because we have a responsibility to do that regardless of how controversial it might be, who the artist might be, or the politician might be,” Hegarty explained. “This is a couple of months away, so we’ve still got plenty of time to fill those slots.”

According to police officials, it's not uncommon for officers to shy away from working events featuring controversial artists or politicians, but that the department always make sure police are on hand.

During a Super Bowl party in Washington, members of the National Sheriffs’ Association boycotted Beyoncé's performance during halftime by turning off the television in protest over her pro-Black Lives Matters song "Formation," which police believe is anti-law enforcement.

Watch the video below from Fox13: