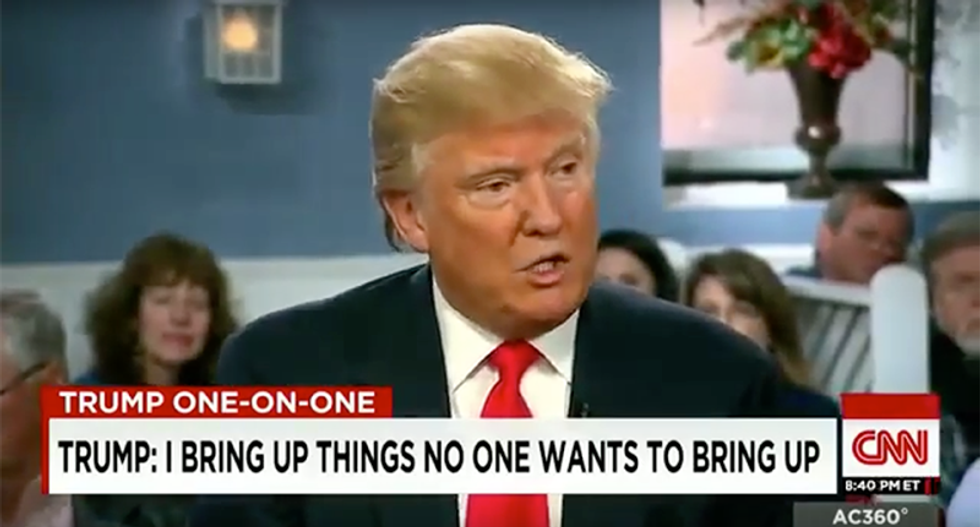 Donald Trump is already under fire from a former staffer for sexism and wage discrimination, there's the feud with Megyn Kelly, and who can forget the dehumanizing attacks on Rosie O'Donnell. He’s got a problem with women despite saying he loves them – but some conservative women continue to flock to him.

One brave father at a Friday morning CNN Town Hall asked Trump a very personal question about the President serving as a role model. "I have three daughters at home," he began. "And I want nothing more than for them to look at their president as a role model. Throughout the course of this campaign you've said some disparaging comments about women, about people from other countries, and about anyone who has disagreed with you. Explain to me how I can look at my daughters and have them look up to a President Trump as a role model."

"No one has more respect for women than I do," Trump began as if he was challenging someone to prove him wrong. "Thirty years ago I had a women building a major, major construction job in New York City, and that never happens, that just didn't happen..." Trump also talked about all of the women executives in his company and reiterated how much he loves women once more.

Not surprisingly, he then fell back on his typical "political correctness" lines saying that he brings up things others don't want to talk about. He specifically mentioned immigration and how he wants to build a wall. "If you look at New Hampshire, you have a tremendous heroin problem. It's coming from the border! People are driving trucks right over the border loaded with cocaine loaded up with heroin loaded up with all sorts of drugs and they're taking the money back." He went on to talk about the drug problem as if it was a new thing that no one else knew about saying, "you know this area of New Hampshire has a tremendous drug problem?"

New Hampshire has been in the news since before August 2015, when it was found to be the top state in heroin problems. Just a month later, Manchester, New Hampshire announced it had 65 heroin overdoses in their city over the course of the year.

Trump said he will stop it but claimed that "these politicians" can't stop it. He also went on to say that the world went wild when he brought up the "Muslim problem" and that now they're agreeing with him, but provided no evidence of that.