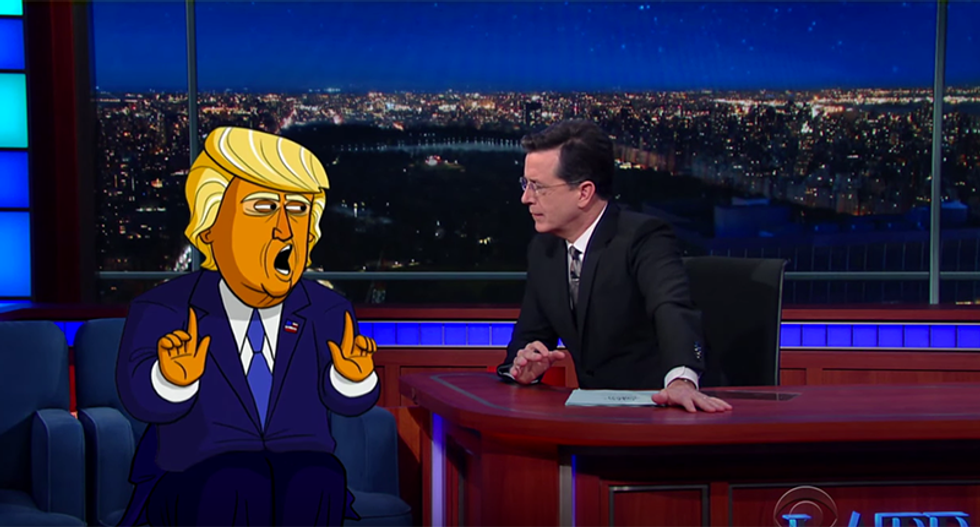 "Speaking of stupid and 'Mad Men' -- Donald Trump," Stephen Colbert began a segment on Wednesday night's "Late Show." Trump has been having a rough week on the political stage. The good news for his staff, however, is that you can always tell his mood based on what color hat he's wearing. "It's like the old saying: Cap of white, friend in sight. Cap of red, we're all dead," Colbert joked.

Then he launched into the political troubles Trump has been facing this week. First, it began with the wife fight. When Anderson Cooper asked Trump about the exchange on CNN's town hall, Trump's excuse was "he started it," blaming rival Ted Cruz. Somehow managing not to roll his eyes, Cooper told Trump it was the argument of a 5-year-old.

"Yeah, Trump does act like a 5-year-old, but that's why people like him," Colbert explained. "He's uncomplicated. If he's angry he shouts. If he's happy, he wears 'Happy Hat.' He loves building towers and he thinks girls are kinda yucky."

Colbert then addressed Trump's campaign manager, who has been charged with battery. Trump defended his manager saying that the former Breitbart reporter, who was allegedly assaulted, touched him and had a pen in her hand, which could have been a "little bomb."

"Yes! Her pen," Colbert said picking up his pen. "Her pen could have been a little bomb. And her fingers could have been a gun. Pew! Pew! Pew!" Colbert joked shooting with his finger guns. "Or even scissors," he said using his fingers to show a cutting motion. "Or rock or paper! Or a dog!" He said making his hand into a dog shape and barking. "Or worse, she could have used that pen to write down something he said. There's no telling how much damage that could do!"

Colbert said that he invited Trump on the show to address the controversy but what they got was an entirely different Donald Trump. "Plus, I think he's turned into a cartoonish version of himself at this point," he said before inviting a "slightly less cartoonish version" of Trump to join him for an interview.

The wrinkled, orange, two-dimensional man began the interview with "he started it," referring to anyone for whatever they started. "Unless it makes America great again, in which case I started it."

When it comes to Anderson Cooper's questions and accusations of Trump being a 5-year-old, Trump said he was a "dumb-dumb. He's a stupid-head, a total poopy-pants."

Colbert told Trump the response was "a little immature." The cartoon Trump responded: "I know you are, but what am I? Stephen, I am rubber, you're glue, I have a lawyer and I will sue."

Colbert informed Trump that he had seen the video of the incident in Florida and it appeared that his campaign manager had in fact "grabbed a reporter roughly." Cartoon Trump shot back, "No he didn't, infinity. That settles it, it totally settles it. I settled it in the best possible way ever."

But in the end, cartoon Trump relented a little: "Maybe he did it, but she started it."