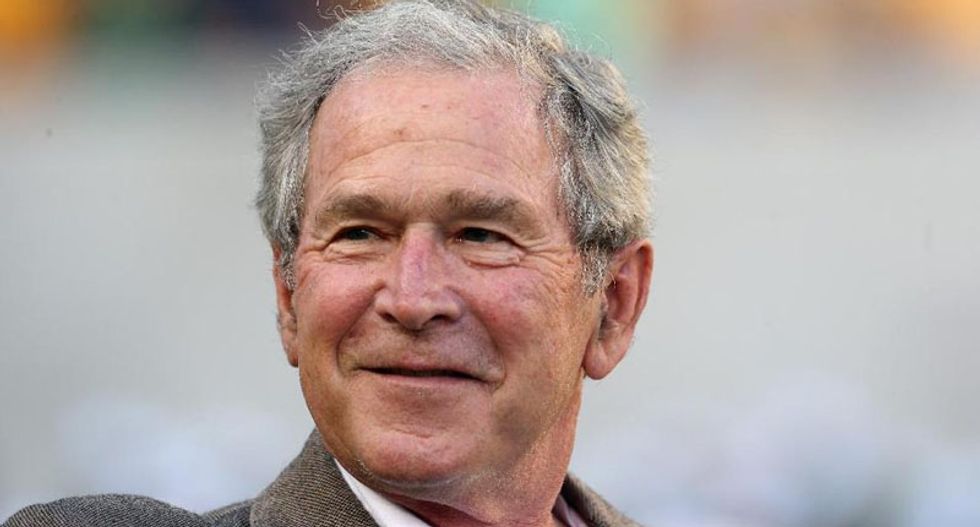 Donald Trump is freaking people out by asking supporters to pledge their loyalty to him -- but he slammed other Republicans for demanding oaths as recently as two months ago.

The GOP candidate is evoked Nazi imagery by leading loyalty pledges -- complete with "Heil Hitler" salutes -- at rallies in Florida and North Carolina.

That's a sharp reversal from late December, when he slammed Virginia's Republican Party for its plan to require voters to sign a "statement of intent" before taking part in its March 1 primary.

Virginia is among 14 states with "open primary" elections that allow voters to select the candidate of their choice regardless of party, and the GOP hoped the pledge would prevent Democrats from causing mischief in the Republican primary.

Trump strongly criticized the plan, calling it a "suicidal mistake" that would discourage voters fed up with partisan politics from casting ballots.

The loyalty pledge Trump first led at a rally Saturday in Florida was more like "the Bush pledge" signed and eventually recited by participants at a 2004 re-election campaign rally for President George W. Bush:

The pledge was necessary to prevent Democratic activists from disrupting the president's campaign rallies, the Bush campaign said at the time.

A New Mexico man said in 2004 that event organizers asked police to escort him out of a Bush rally after discovering he was a registered Democrat, and not a Republican.

"I wasn't going to disrupt anything, but I probably wasn't going to clap a lot, either," said Nick Lucy, then a 64-year-old veteran who had seen every president since Ronald Reagan speak and was given his ticket to the event by a local GOP official.

Trump recently expressed a desire to punch a protester who was being escorted out, and a rally last weekend in Kentucky was marred by white nationalists shoving black protesters.

The GOP candidate on Friday promised supporters at a Michigan rally that he would help defend them in court if they hurt protesters during altercations, and he complained that one protester flipped him off Monday in North Caroline instead of joining the stiff-armed salute during a loyalty pledge.

Abraham Foxman, a Holocaust survivor and the former longtime president of the Anti-Defamation League, said the spectacles were chilling -- and he did not doubt Trump was intentionally tapping into Nazi imagery.

“As a Jew who survived the Holocaust, to see an audience of thousands of people raising their hands in what looks like the ‘Heil Hitler’ salute is about as offensive, obnoxious and disgusting as anything I thought I would ever witness in the United States of America,” Foxman said.