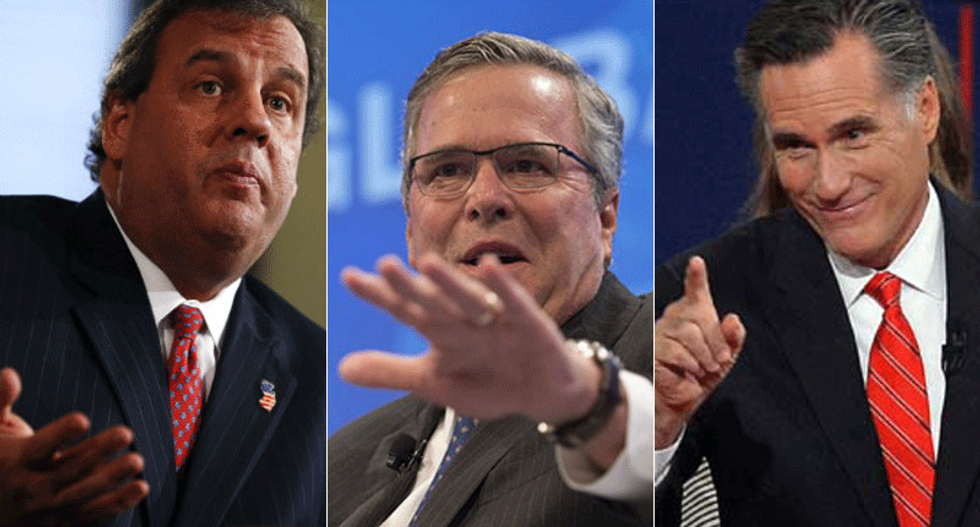 One evening last June, some of the Republican Party's wealthiest donors gathered for a cocktail party at an exclusive resort in Deer Valley, Utah, during a three-day retreat hosted by former Massachusetts Governor Mitt Romney.

They had just heard from six presidential hopefuls. Tom Duncan, the CEO of tool-maker Positec Tool Corp, chatted with a few attendees about a fantasy ticket to secure the White House in November 2016: Wisconsin Governor Scott Walker, with Senator Marco Rubio of Florida as his running mate.

Duncan, for his part, liked Ohio Governor John Kasich, but also had his eye on former Hewlett-Packard CEO Carly Fiorina. No one mentioned Donald Trump, even though he had been signaling for months that he planned to run. Four days later, the New York property magnate declared his candidacy and within weeks had shot to the top of the polls, eclipsing all of his Republican rivals.

The story of Trump's rise has played out day after day on television and on social media, but the conversations behind closed doors among members of the Republican elite during this period have been less well documented.

Many of the conversations had one thing in common: a stubborn refusal to take Trump seriously, even as fans packed sports stadiums to see him in the summer months, as he dominated media coverage of the election, and as polls showed him winning wide support among young and old, men and women.

Scenes like the one at Deer Valley would be repeated in rarified enclaves of the party elite around the country again and again in the coming months. Many in the Republican establishment believed he would eventually self-destruct or that Americans would lose patience with his bombast, his free-wheeling insults and lack of firm policies to back up his promises to "Make America Great Again."

Trump won a majority of the states holding nominating contests on Super Tuesday, accelerating his march to the Republican nomination.

Republican donors, strategists and campaign operatives interviewed by Reuters admitted they had misjudged the mood of voters who have thrown their support behind Trump after he promised to build a wall on the Mexican border, temporarily ban Muslims from entering the United States and block Syrian refugees because they might be militants.

Trump's spokeswoman, Hope Hicks, declined to comment for this story.

Trump's rise seemed to take place entirely outside the structures of the normal nomination process within the Republican party.

For example, many attending the Conservative Political Action Conference, a gathering of grassroots activists, in February 2015, were excited by presidential hopefuls Wisconsin governor Walker and Texas Senator Ted Cruz. The annual convention is a must-stop for any Republican White House contender.

In his speech, Trump tried out a now familiar pledge: build a giant southern wall to stop illegal immigrants, a vow that would later ignite his insurgent campaign and propel him well ahead of the main pack of Republican presidential hopefuls.

"His speech was well-received, but he didn't do that well in the straw poll," said Matt Schlapp, the chairman of the American Conservative Union, which organizes CPAC each year. Kentucky Senator Rand Paul won the poll.

CPAC's attendees were mostly conservative political activists already engaged in the electoral process. The fans who would drive Trump's success were not. The candidates favored at CPAC have languished. Walker left the race just two months after officially entering it. Paul dropped out after the first nominating contest in February. Cruz has won just three of more than a dozen contests so far.

Early in his run, Trump was a source of puzzlement for rich Republicans, such as those who gathered one Sunday in early August in the Hamptons, New York's gilded summer retreat destination, to discuss the 2016 race. They met for lunch at a billionaire hedge fund manager's estate near a body of water nicknamed "Goldman pond" for the concentration of financiers' houses around it.

Among the guests were former defense department officials, the chief executive of a big real estate firm, a prominent private equity partner and conservative academics, according to one of the guests, who spoke on condition of anonymity. The source, like many other guests, backed former Florida Governor Jeb Bush.

"A variety of subjects were discussed, but chief among them, I would say, was the concern and consternation over the candidacy of Donald Trump," the source said. At the time, Trump's rating in national polls was twice his closet rival's, according to Reuters/Ipsos data.

The attendees discussed Trump's rise and observed he had struck a chord with many Americans, the source said. They fretted over whether his presence would force other candidates to go negative. They hoped he wouldn't hijack the first Republican presidential debate, then less than a week away.

But they decided, however it had begun, Trump's reign atop the polls wouldn't last.

"I think it's literally just a matter of time before his NASCAR careens into the wall – and hopefully not into the other drivers," the source said in an interview on Aug. 6.

Trump has not crashed.

And on Monday, the CEO of NASCAR, Brian France, endorsed him.

Right to Rise, the outside spending group backing Bush, built up a massive war chest of more than $100 million to attack opponents who could thwart his bid for the nomination. Trump was not identified as a potential threat, not in the summer, nor in the fall of 2015, even as he eclipsed Bush, according to multiple interviews during that period with a member of the group's leadership team.

"I don't think he's hurting us," the official, who did not want to be identified, said in an interview last fall. Trump would be a footnote in the race by January or February 2016, he predicted.

Bush bowed out on Feb. 21 after months of struggles were capped by a poor showing in the South Carolina primary.

Duncan, the Positec CEO, said conversations he had with representatives from three campaigns as recently as November and December barely touched on Trump.

"There was so much time left," he said. "I honestly thought that he would implode."

Now there is little time left, and the party's establishment can only look back at early warning signs they missed.

One came in January 2015 at the Iowa Freedom Summit, a Republican "cattle call" for White House hopefuls that marked the unofficial start of the 2016 presidential race. Attendance spiked after organizers added Trump to the agenda.

"When we announced Donald Trump, the event took on a life of its own," said David Bossie, the president of the conservative advocacy group Citizens United and the conference's organizer.

"I don't believe it's possible, if you were not in a coma, for anyone in the establishment, or the media, or on planet Earth, to have missed Donald Trump's ascendancy to be the leading Republican for the nomination."