Nation of Islam's Louis Farrakhan joins KKK in praise of Donald Trump: 'I like what I'm looking at' 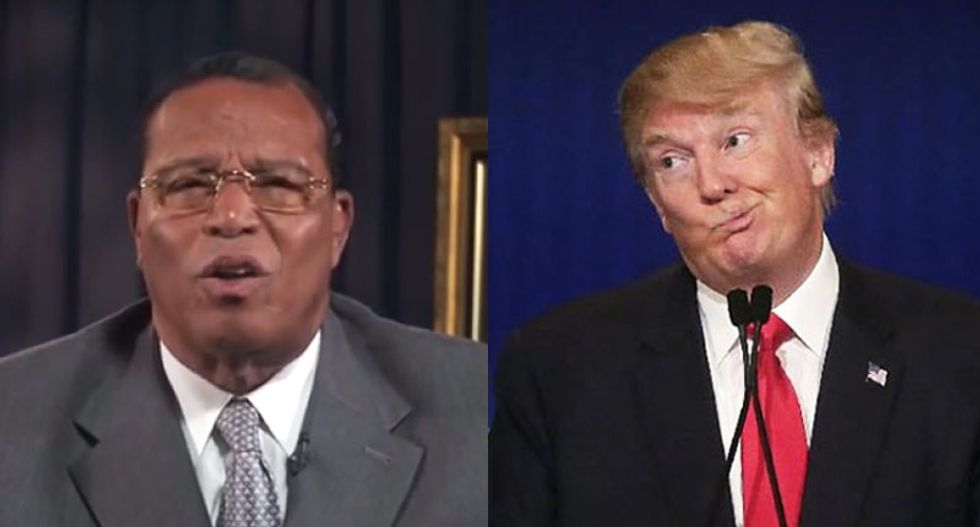 Proving that politics does indeed make strange bedfellows, the Nation of Islam's Louis Farrakhan joined with the Ku Klux Klan in expressing his admiration for 2016 GOP presidential front-runner Donald Trump.

In remarks during the Nation's annual Saviours’ Day sermon in Chicago, the leader of the black separatist group praised Trump for not accepting money from the "Jewish community," reports The Hill.

“[Trump] is the only member who has stood in front of [the] Jewish community and said, ‘I don’t want your money,’” Farrakhan told his followers.

“Anytime a man can say to those who control the politics of America, ‘I don’t want your money,’ that means you can’t control me. And they cannot afford to give up control of the presidents of the United States.” Farrakhan explained before hastening to add, "“Not that I’m for Mr. Trump, but I like what I’m looking at."

Trump has been battered for failing to immediately disavow the support of the Klan and other white supremacist organization, with former GOP presidential candidate Mitt Romney calling his delayed response "disgusting and disqualifying."

Like Trump, Farrakhan is not a fan of the Bush family, blaming them for the 9/11 terrorist attack.

“They needed another Pearl Harbor,” Farrakhan stated. "They needed some event that was cataclysmic, that would make the American people rise up, ready for war. "They plotted a false flag operation and when a government is so rotten that they will kill innocent people to accomplish a political objective, you are not dealing with a human."

“Now, they got into the [second] Bush administration and on 9/11 the Twin Towers went down. [Former President] George [W.] Bush and those devils, those Satans around him. They plotted 9/11. Ain’t no Muslim took control of that plane.”

Dennis Aftergut and Melanie Sloan wrote in Slate how state Attorneys General Dana Nessel (D-MI) and Hector Balderas (D-MN) had made criminal referrals to the U.S. Department of Justice of the Trump supporters who signed fraudulent election documents.