Neo-Nazis at Trump rally caught on video roughing up black woman: ‘You're scum, your time will come!' 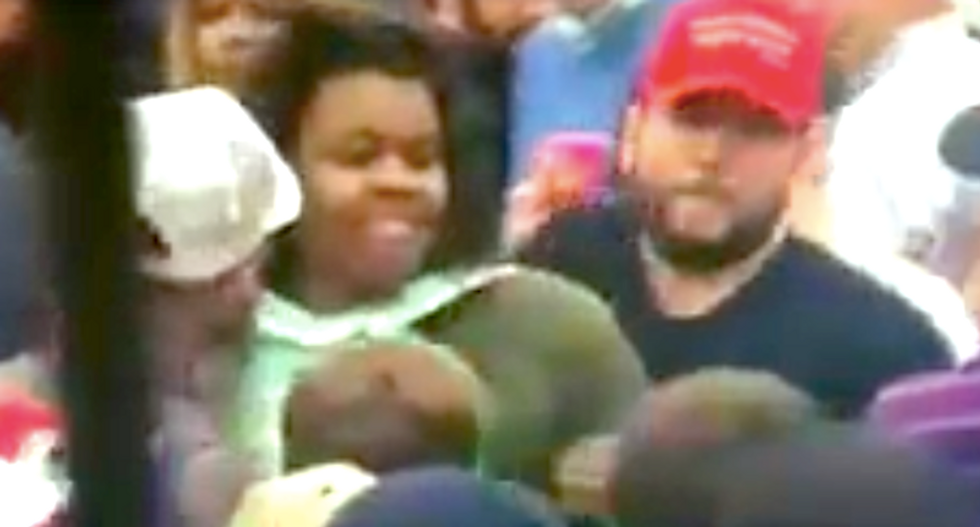 White supremacists hurled racist and sexist slurs Tuesday afternoon as they pushed a black protester out of a Donald Trump rally in Kentucky.

Videos have circulated of a young woman being pushed and shoved by a screaming man wearing a "Make America Great Again" hat at the Trump rally in Louisville, and the protester described the experience afterward in a Facebook video.

I'm watching this shit right now on the news 2016 in Louisville KY and I'm furious !!!!look at the way they treated this beautiful African American female these racist ### ######## turned the tables and you know what would happen this is what these people think about us

"I was called a n****r and a c*nt and got kicked out," said Shiya Nwanguma, a University of Louisville student. "They were pushing and shoving at me, cursing at me, yelling at me, called me every name in the book. They're disgusting and dangerous."

The hat-wearing Trump supporter appears to be white nationalist Matthew Heimbach, head of the Traditionalist Worker Party, according to other protesters who spoke with the New York Daily News.

"I watched him for hours recruit Trump supporters with five of his buddies," said protester Molly Shah. "They later attacked the group I was with. The neo-Nazis threw punches and kicked us."

A Twitter account maintained by a Traditionalist Worker Party supporter suggests the group attended the Louisville rally and took signs from protesters.

Another protester said the white supremacists purposefully bumped protesters, hit them with signs and stepped on their shoes as they crowded together, waiting for the rally to begin.

"In my entire life I had never had anyone look at me with such hate," said activist Chanelle Helm.

She said the feeling was eerie and reminded her of historical photos from the civil rights movement of the 1950s and 1960s, and she said the white supremacists led a chant that chilled her.

Trump interrupted his speech several times to comment as the demonstrators were led from the rally by U.S. Secret Service agents and Metro Police, complaining that he would be criticized whether he encouraged rough treatment or not.

"Don't hurt him," Trump said, as supporters pushed and shoved a black man in the crowd. "See, if I say go get him, I get in trouble with the press -- the most dishonest human beings in the world, the worst. If I say, don't hurt him, the press says, maybe Trump isn't as tough as he used to be. Can you believe this?"

The forcible removal of protesters has become a regular feature of Trump rallies -- and the candidate often encourages violence against them.

“You know what I hate? There’s a guy, totally disruptive, throwing punches — we’re not allowed to punch back anymore,” Trump said last week at a rally in Nevada. “In the old days, you know what they used to do with guys like that when they were in a place like this? They’d be carried out on a stretcher, folks.”

"I’d like to punch him in the face,” Trump added, as the crowd roared in approval.

A group of 30 Valdosta State University students were removed from a rally Monday in Georgia, although the students claim they had not been disruptive.

Trump supporters dismissed concerns about the GOP candidate's refusal to condemn the Ku Klux Klan and its former leader David Duke, saying the gaffe was a "made-up issue."

Another supporter, a disabled woman who said her friends had lost jobs to illegal immigrants, explained what she liked about Trump.

"We've lost our country to everyone else," said Dianna Burba, a registered Democrat who explained that rural whites had been left behind. "The illegals need to go back where they came from."