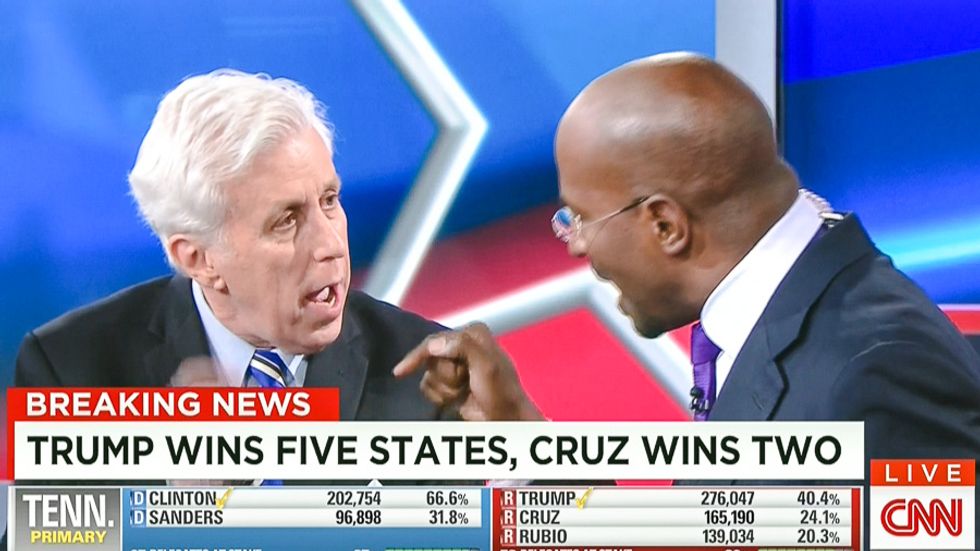 CNN Democratic Strategist Van Jones explained to Donald Trump supporter Jeffery Lord on Tuesday that it was disingenuous for the billionaire candidate to claim he would destroy Islamic terrorists groups while ignoring questions about domestic white supremacist groups.

"I hate to say this about the Republican establishment but their view of civil rights is to tip the black waiter five bucks at the country club," Lord opined. "This is why Donald Trump has the ability [to win] because he's not going to patronize people."

"Hold on," Jones politely interrupted, bringing a hush over the other pundits. "The things that Donald Trump has done -- and not just in this race -- are horribly offensive."

"S.E. is right," he continued. "He is whipping up and tapping into and pushing buttons that are very, very frightening to me and frightening to a lot of people."

Jones argued that when Trump was "playing funny with the Klan, that is not cool."

"We're not going to play that game," Jones shot back. "No, you need to take a serious look at the fact that this man has been playing fast and loose and footsie. When he starts talking about terrorism, he gets passionate, he says, 'No, this is wrong.' But when you talk about the Klan, 'Oh, I don't know, I don't know.'"

Lord continued his attempt to label the KKK as "leftists," but it only made Jones angrier.

"Call them chipmunks!" he exclaimed. "They kill people. Don't play games with that!"

"I don't care how they voted 50 years ago, I care about who they killed," Jones added. "When you do not acknowledge that he did not answer that question [about disavowing the Klan] with the passion he answered with other terrorist organizations, you do yourself a disservice, you do your candidate a disservice."

"I know you, I trust you, tell Donald Trump for my children's sake, for the children's sake of America, if he's going to lead this country, he needs to be as passionate about what has happened to people in my community as anybody else's."