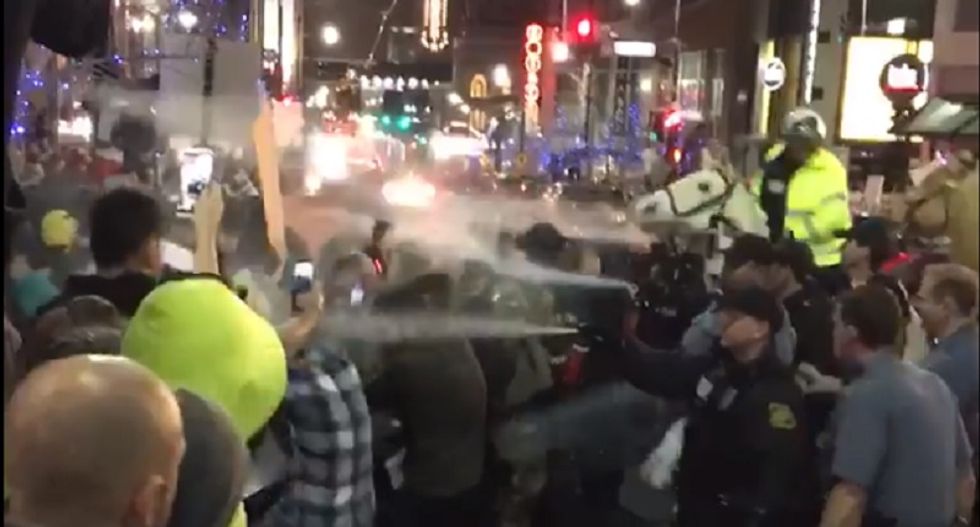 Police were caught on video using pepper spray on demonstrators outside a Donald Trump rally in Kansas City on Saturday.

A protester filmed the incident while standing in a crowd of demonstrators when police officers, two on horseback, started spraying them. The Twitter user, Chris, and his friends were talking among themselves and at one point jokingly yelled "Save the horse!" in reference to a jittery-looking police horse.

It's not clear what prompted the officers to do so, but several began spraying the crowd of protesters, moving down the line.

Chris posted that the officer "walked up spraying us."

Earlier, he posted that a large crowd of protesters had gathered "to tell Trump his hate is not welcome in KC."

Getting a pretty good crowd to tell Trump his hate is not welcome in KC. #Trump #TrumpRally #KansasCity #ProtestHate https://t.co/FihC0xTsT4
— Chris (@Chris) 1457827603.0

41ActionNews reporter Josh Helmuth was on the scene and based on videos captured on his Twitter feed, the scene was tense outside. A woman told him a fight had broken out, though it was unclear who was involved. Helmuth reported he and the photojournalist accompanying him were hit by the bevy of pepper spray and mace.

Dozens of demonstrators were kicked out of the event, and some came out chanting, "Black lives matter."

Trump just kicked out 25-30 people from his rally within 5 minutes pic.twitter.com/HGIGocG00a

Inside the rally, demonstrators repeatedly interrupted Trump, as has become the norm. Trump vowed he wanted to ruin the lives of protesters by pressing charges on them, thus causing them to have arrest records.

Trump said Kansas City officials had suggested he cancel the event out of safety concerns, which the city manager flatly denied.

Large demonstrations broke out in Chicago on Friday night and Trump decided to cancel the event -- again saying that city officials had told him to cancel when they had in fact not.