Florida transgender student fights for equality in US bathroom battles 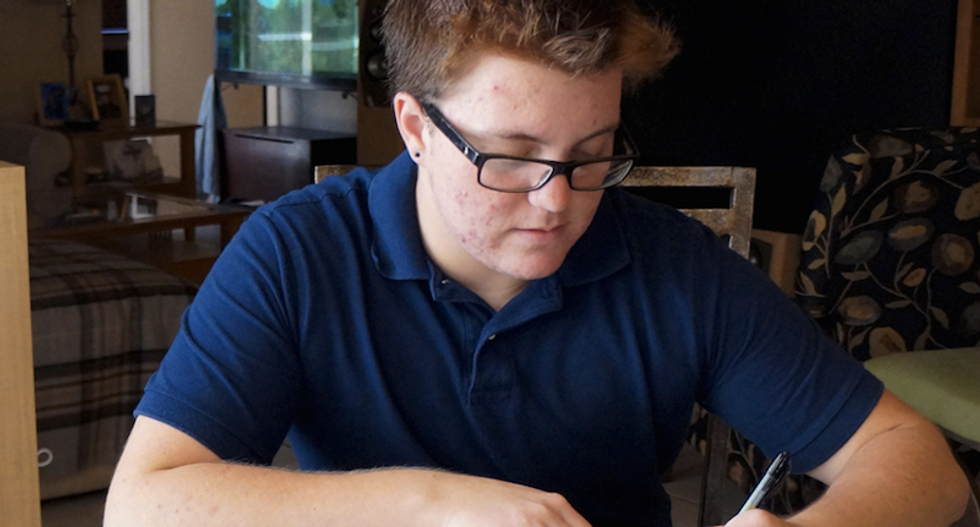 The Florida high school student was barred last year from using the boys' restroom, where he felt that he belonged, launching his school into the bathroom wars between gay rights activists and social conservatives.

His presence in the girls' bathroom even prompted screams.

"It was very uncomfortable for me and all of the second-grade girls in there," said Quinn at his Sarasota home, decorated with childhood photos of a girl struggling with gender identity. "I didn't need that happening every time I would go to the bathroom."

Bullied to the point he thought about suicide, Quinn began to organize protests early this year and won the right to use the male restroom in January.

Quinn is now lobbying for a policy that would give all transgender students in Sarasota County on Florida's Gulf Coast access to the bathroom that they identify with, fueling the debate playing out nationally a year after the U.S. Supreme Court legalized same-sex marriage.

North Carolina and Mississippi recently adopted laws seen as discriminatory to lesbian, gay, bisexual and transgender interests. Legislation focused on transgender bathroom access, as well the rights of those with religious objections, has drawn protests in several other states, mostly in the South.

Despite the pressure, advocates call the laws needed.

"There is a right to bodily privacy that we have got to protect, particularly for a student at school," said Matt Sharp, of the Alliance Defending Freedom, which advocates for conservative positions on religious liberty.

Inside, about a dozen residents told elected officials they feared that more flexible polices would allow male rapists to masquerade as females and force boys to expose their genitals to girls using the bathroom with them.

Quinn's initial requests to use the boys' bathrooms were denied by officials at Pine View School, a magnet program for intellectually gifted students in grades two through 12.

As his voice deepened through testosterone therapy and hair sprouted on his face, he began to use the male bathrooms anyway. His state driver's license recognized his sex as male.

When school administrators found out, Quinn was offered access to single-user restrooms in the main office and media center. He considered that option inherently unequal and tried avoiding school bathrooms entirely, telling teachers how much class he would miss walking across campus.

Similar objections were raised in Gloucester County, Virginia, prompting the U.S. Fourth Circuit Court of Appeals on Tuesday to rule in favor of a transgender student.

The American Civil Liberties Union had sued on behalf of a transgender male, who was restricted from using the boys' facilities at school but offered a private, gender-neutral option.

"It is entirely stigmatizing," said ACLU staff attorney Chase Strangio of the separate accommodations. "It also sends the clear message that you're not a boy if you are a trans boy."

The decision marked the first time that a federal appeals court has found transgender bathroom access to be protected under the 1972 Title IX Act, which prohibits sex-based discrimination by schools receiving federal funding.

The court ruling reflected the position of U.S. President Barack Obama's administration, which filed a brief supporting the student.

The impact could be felt in North Carolina, which is under the court's jurisdiction and recently became the first state in the nation to enact a law restricting bathroom use to an individual's sex at birth.

"This is a major, major change in social norms,” the state's Republican governor, Pat McCrory, told reporters of the ruling.

Quinn's Florida school district has been watching the Virginia lawsuit, which now returns to a lower court, as officials there consider bathroom requests by transgender students on a case-by-case basis.

"We don’t want to blaze a trail and open ourselves up for a possible lawsuit," Sarasota County School Board Chairwoman Shirley Brown said at a public workshop in February. "But then, of course, by leaving things at status quo, we might open up ourselves to a different lawsuit.”