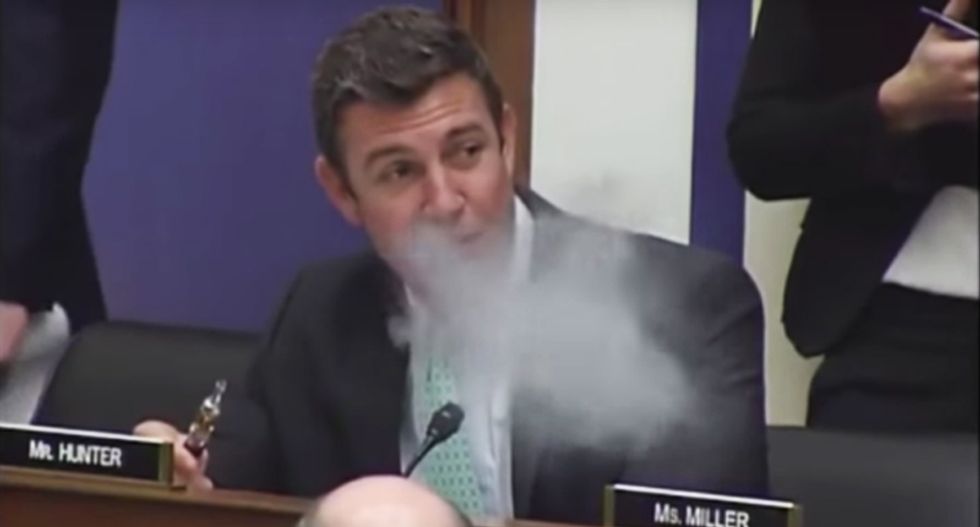 A little known California lawmaker -- who achieved national notoriety for being filmed vaping during a Congressional hearing -- has been forced to cut a fact-finding trip to Israel short to deal with a family emergency.

The emergency? He's facing heat at home for allowing his family to charge personal  expenses -- including video games, travel, and medical expenses -- to a credit card tied to his campaign funds.

A report by the San Diego Union Tribune this week stated that more than 60 video game transactions totaling $1,424 that were charged to a campaign credit card belonging to Rep. Duncan Hunter (R-CA) were being looked at by the Federal Election Commission.

Hunter, who inherited his seat in the conservative East County part of San Diego from his father with the same name, was in Israel when more "discrepancies' showed up in his campaign filings.  Those expenses include $1,128 for travel, $1,650 to Hunter’s children's school in El Cajon, the $1,424 for video games and $1,137 paid to an oral and facial surgeon.

When questioned about the initial gaming charges, Hunter said that his son inadvertently used the wrong credit card. With family expenses showing up, Hunter then said that he and his wife -- who is paid $3,000 per month as his campaign manager -- both had cards.

His story changed once again Thursday morning when he said that he was the only one with a card.

While Hunter said on Thursday that he took “full responsibility” and planned to “pay everything back by tomorrow morning with interest,” the San Diego paper stated that the conservative lawmaker has known about the illegal expenditures for months.

In a scathing editorial, the SDUT wrote, "Before you applaud his noble-sounding response and newfound motivation, know this: campaign finance reports covering the 2015 calendar year show at least $5,339 in personal expenses or mistaken charges 'to be paid back.' Yet the forms show only $169 of those known personal expenses were paid back last year — on Oct. 21. Which means he knew he was on the hook for personal expenses at least six months ago."

Personal expenses of campaign funds are strictly forbidden under election laws, with then FEC telling Hunter that a speedy correction of such errors would be taken into consideration before enforcement decisions are made.