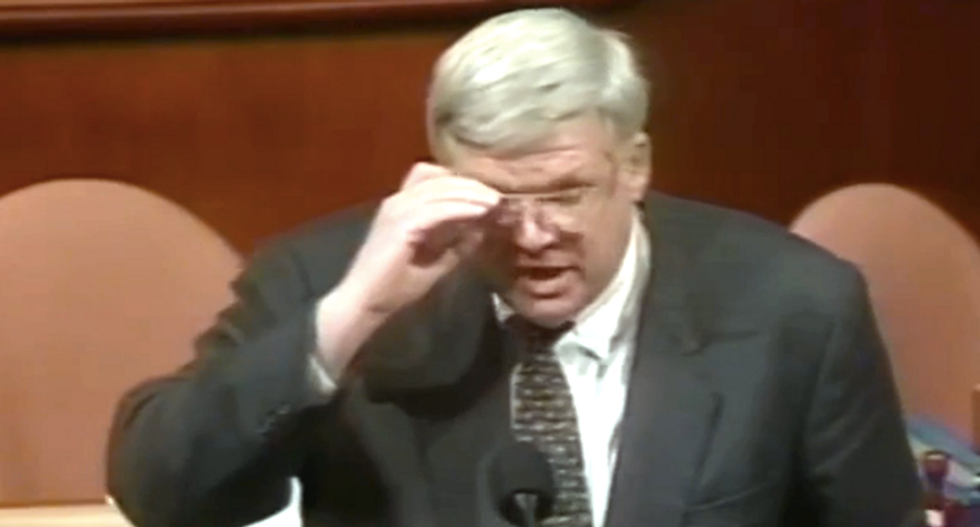 Serial child molester and former House Speaker Dennis Hastert begged for leniency before he was sentenced for covering up decades of sexual abuse -- but he urged harsh punishment for other offenders like himself more than a decade ago, when he was still a lawmaker.

Hastert was sentenced Wednesday to 15 months in federal prison, followed by two years of supervised release and sex offender treatment, for breaking federal banking rules related to the cover-up.

The longtime Republican lawmaker supported the Child Abuse Prevention and Enforcement Act of 2000 and called for stiffer penalties for sex offenders before his own pattern of abuse was revealed, reported the Chicago Tribune.

"It is important to have a national notification system to help safely recover children kidnapped by child predators," Hastert said in 2003, after Utah teenager Elizabeth Smart was recovered after a nine-month ordeal of kidnapping and abuse.

"But it is equally important to stop those predators before they strike, to put repeat child molesters into jail for the rest of their lives and to help law enforcement with the tools they need to get the job done," Hastert said at the time.

The former GOP lawmaker also spoke out against President Bill Clinton's private conduct during the impeachment proceedings, saying he had abused and violated the public trust.

Hastert pleaded guilty to structuring, or withdrawing large amounts of money in small amounts to avoid detection and then using the cash to pay off one of his victims.

One of his victims, 53-year-old Scott Cross, described during the sentencing hearing how Hastert, his former wrestling coach, had molested him at 17.

Hastert asked the man's brother -- who was his former political protege, Tom Cross -- to write a letter of support in hopes of receiving a lighter sentence.

"We are very proud of Scott for having the courage to relive this very painful part of his life in order to ensure that justice is done today," Tom Cross said in a statement. "We hope his testimony will provide courage and strength to other victims of other cases of abuse to speak out and advocate for themselves.

U.S. District Court Judge Thomas Durkin described Hastert as a serial sex abuser and handed down a sentence longer than the zero to six months that federal prosecutors had recommended.

Prosecutors criticized Hastert's "stunning hypocrisy" for achieving success while his victims struggled, and continued to struggle, with the effects of his abuse.