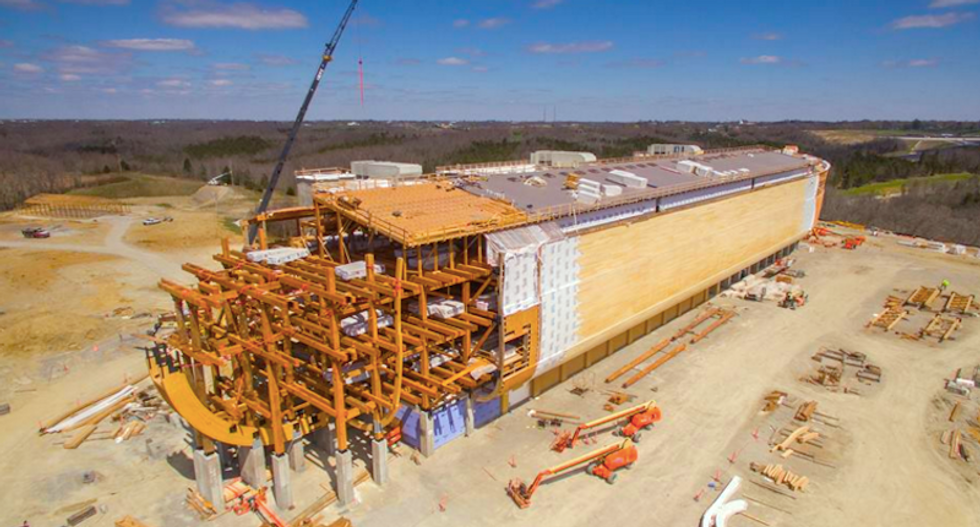 Creationist Ken Ham offered a sneak peek of his massive Noah's Ark replica -- which he said will be far more realistic than the cartoon "bathtub arks" depicted in children's books.

"When I’ve taken people down to the construction site of the life-size Ark in Williamstown, Kentucky, many have exclaimed with something like, 'I never realized Noah’s Ark was so huge! It’s awe-inspiring,'" Ham wrote in a blog post. "They begin to understand how Noah could fit all the representative land animal kinds on board, and they’re amazed!"

It’s going to be so exciting to watch visitors get their first up-close look at the Ark as they round the final curve along the bus route. :)

The controversial religious theme park, which was granted $18 million in tax incentives by Kentucky lawmakers, is expected to open July 7, and Ham promises it could draw up to 1.4 million visitors each year.

Ham has been sharing photos of the massive wooden structure on social media, explaining that the theme park is intended to promote his literal biblical worldview that the earth was created in six days by God about 6,000 years ago.

"Sadly, many people (even in the church) have been exposed to the childish 'bathtub arks' we see in kids’ books and on the walls of Sunday school classes and so on that make Noah’s Ark seem like nothing more than a cute fairy tale," Ham said. "But once people see the enormity of this Ark structure, they will begin to realize it was a real ship."

The completed ark will be about 450 feet long and 150 feet wide, and it stands about eight stories high.

When you visit, keep an eye out for this young Silesaurus that will be displayed in an enclosure on deck two of Ark Encounter. ;)

"This huge teaching exhibit is a totally immersive experience where guests actually step inside this enormous wooden ship, our depiction of what is described in Genesis," Ham said.

The creationist said the ark -- which will be the largest timber structure in the world when it's completed -- is a "jaw-dropping experience" for visitors who have been able to see it already.

"These guests often stop in their tracks. They contemplate the massive beams and the craftsmanship," Ham said. "They talk to me about the obvious complexity in the Ark’s engineering and architecture. In doing so, they begin to think about Noah in a correct way. You see, many people have (even unwittingly) adopted an evolutionary view of history, thinking that ancient people were less intelligent and less advanced than we are today. They wondered how Noah could have built such an impressive ship."

At Ark Encounter, we want to give people a glimpse of what life may have been like for Noah and his family on the Ark. This includes showing where they would live and sleep. :)

It's not entirely clear from the biblical record how Noah built his ark, but social media photos show Ham's workers built theirs with the benefit of power tools, cranes and other modern equipment.

"From a creationist perspective, however, ancient people would have been highly intelligent," Ham said. "I believe that many were more intelligent than people today. For one, people lived much longer before the Flood, and they may have accumulated the knowledge and technology to build such structures that would be the envy today. Noah had incredible knowledge and the talent to do the task God called him to do."

It’s common to imagine Noah as an old, white-haired, frail man, but at the Ark Encounter, we’re going to challenge the traditional image. http://ow.ly/ZjEat

There will be 132 exhibits on three decks at the completed Ark Encounters, which seem focused primarily on proving two of every land animal could have fit on the biblical watercraft in an effort to "teach us to trust God’s Word."

Check out the latest drone footage of Ark Encounter!! :)