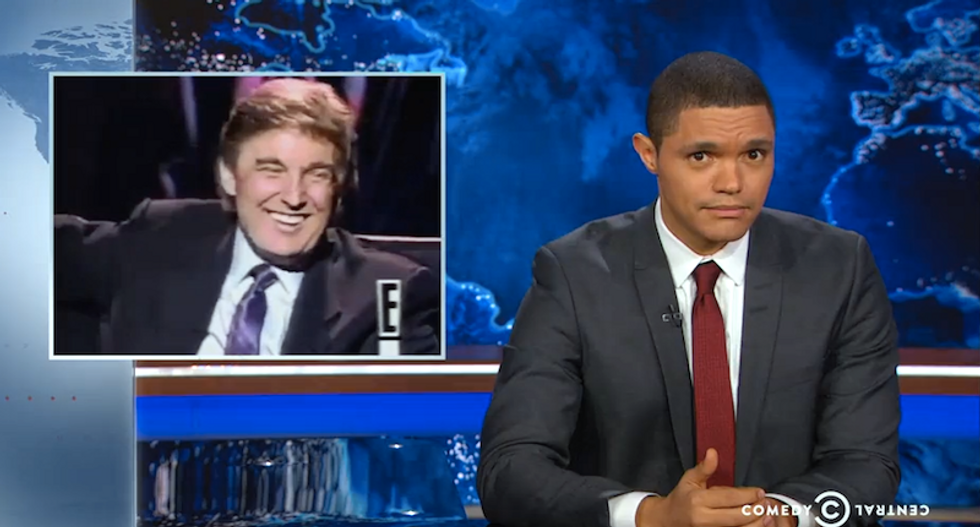 Donald Trump has made offensive remarks about nearly every demographic group, but Trevor Noah said the Republican presidential candidate has saved his most "dickish" remarks for women.

The "Daily Show" host showed a rare, two-decade-old TV clip that shows Trump talking about his then-infant daughter developing breasts, which Noah said proved there's no woman too small for the GOP candidate to objectify.

"Trump's misogyny easily predates the election," Noah said. "In fact, it's pretty much his only consistent belief."

A recent super PAC ad featured women reading some of his rude comments about various women, whom he calls "fat pigs" or "bimbos" and imagines them performing sex acts.

Trump doesn't believe his long history of sexism should disqualify him as a presidential candidate, because he said he knows other politicians say far worse things "behind closed doors."

Noah said his producers found a nearly "endless" supply of video clips of Trump making offensive comments about women, but he showed one clip, from a 1994 episode of "Lifestyles of the Rich and Famous," that he said demonstrated just how "completely innate" his sexist attitude was.

Host Robin Leach asks Trump and his second wife, Marla Maples, which characteristics their 1-year-old daughter, Tiffany, had inherited from each of them -- and Noah paused to ask his audience to consider how each of them might answer a question like that.

"Well, I think that she's got a lot of Marla," Trump says. "She's a really beautiful baby, and she's got, uh, Marla's legs."

"We don't know whether she's got this part yet," he continued, cupping his chest. "But time will tell."

Noah sat for a long moment in stunned silence as the audience laughed awkwardly, as the image remained onscreen of Trump mimicking breasts with his hands while talking about his infant daughter's physical characteristics.

"I've watched that Trump clip maybe 20 times now, but every time I do, I just need to take a quick breather to remember that good things still exist in the world," Noah said.

"Back in 1994, Trump was asked what attributes his 1-year-old daughter shared with his wife," Noah continued. "He could have said anything, but he went with legs and possibly boobs?"

On Monday, The Guardian reported that White House aides have done everything they can to try to talk outgoing President Donald Trump out of pardoning himself or members of his family on Tuesday, his final full day of office, when he is expected to release a final list of over 100 pardons and commutations.

"White House officials say Trump has privately debated with aides whether he should take the extraordinary step of issuing a pardon for himself. Some administration insiders have reportedly warned against a self-pardon, arguing that it would make Trump look guilty," reported Martin Pengelly and Luke Harding. "On Sunday, Trump met his son-in-law Jared Kushner, daughter Ivanka Trump and senior advisers to thrash out a lengthy list of pardon requests, the Washington Post reported. The meeting took up much of the day. The president was personally engaged with the details of every case, it said."

A Republican candidate for Phoenix City Council has now deleted tweets she wrote earlier in the month praising the pro-Trump rioters at the United States Capitol building as "patriots."

The Arizona Republic reports that GOP candidate Nicole Garcia on January 6th wrote tweets that gushed over the rioters who were assaulting the Capitol building in an attempt to overturn the results of the 2020 presidential election.