Colbert: CBS says it’s okay to say ‘miserable son of a b*tch’ — but only if it’s about Ted Cruz 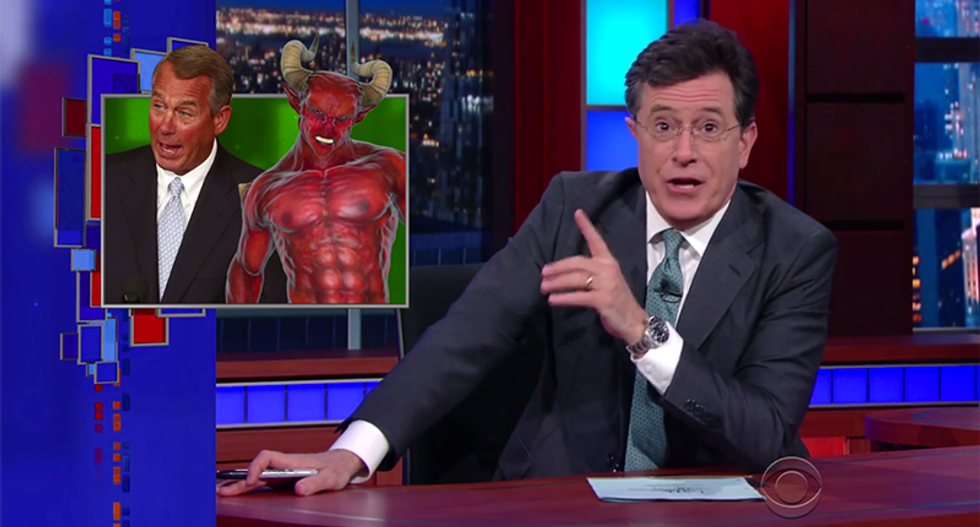 Monday evening was one of Stephen Colbert's best segments yet. The comedian didn't hold back, ridiculing Cruz for his major polling drop in Indiana, whose primary is Tuesday. "The Republican second-runner is trailing Trump by 15 points, even though less than a week ago, Cruz was up by 16 points," Colbert said. "It's almost as if spending time there campaigning hurt him. Well, you know what they say about Ted Cruz? To know him is to wish you didn't."

As you might recall, Boehner also called Cruz "Lucifer in the flesh." Boehner would know too, "because they clearly go to the same tanning salon."

Sure, we're all laughing, but Colbert thinks if Ted Cruz was really the devil we'd all see more signs. "The Earth would open up and swallow people when they said his name." Colbert then showed the clip of the unfortunate moment Sunday, when slim-chance VP, Carly Fiorina, looked as if she fell through a trap door after announcing the Texas senator. "Oh my God! Where did she go!?" Colbert shouted. "She vanished instantly. It's almost as if some sort of demonic power about saying the phrase 'the next president of the United States: Ted Cruz—'" and Colbert suddenly fell out of his chair and under his desk.

Cruz is even getting flack at his own rallies. Like Trump, Cruz gets a few hecklers, but this time, it was a kid approximately 10-years-old, who shouted out "you suck!" Colbert had to use his script to cover his massive grin. "Yes, a child shouted, 'you suck' at Ted Cruz. Now, we don't know the heckler's name but we do have a picture of the child," Colbert said before showing this photo: 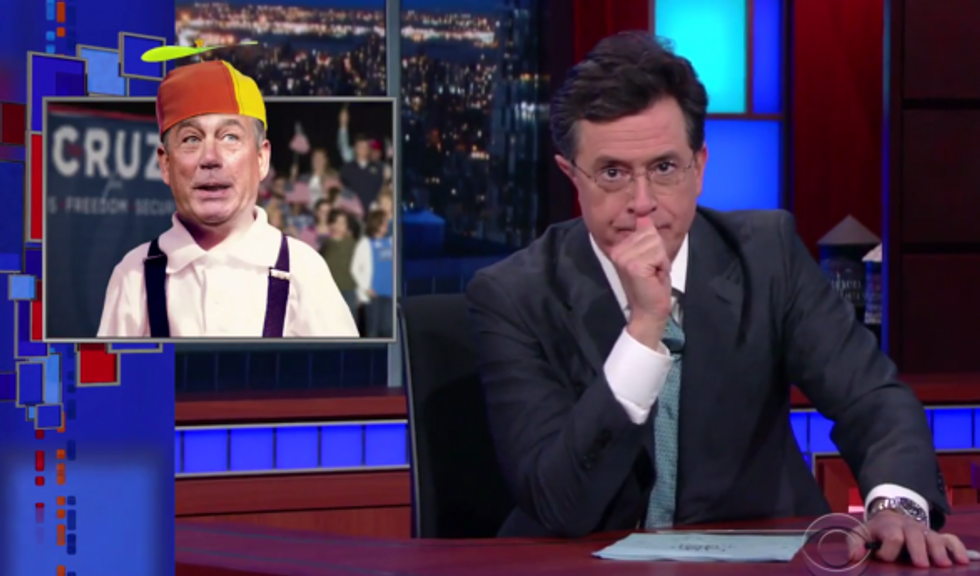 The worst part for Cruz is that even Fox News has left him in the dust. When they ran the story about the heckler, they put "you suck" in massive letters across their screen under Cruz's picture. Colbert joked that news about drone attacks was buried in the crawl below, but "Ted Cruz sucks is up here in 190-point, 'Man Walks On The Moon' font."

Cruz responded to the child by telling him he needed to be more respectful and that if it were his child he'd spank him. "You know things aren't looking good for the Cruz campaign when they're trying out a new slogan, 'Ted Cruz '16: He Hits Kids.'