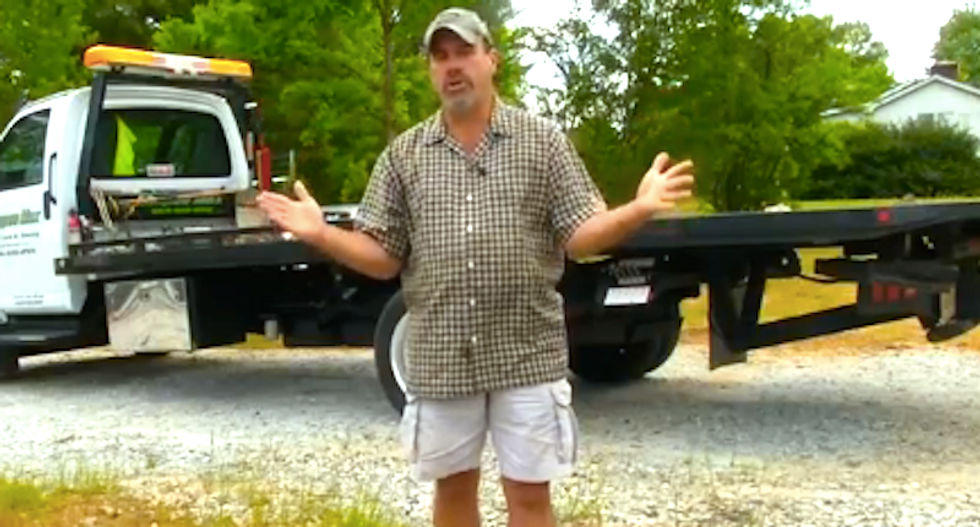 The owner of a South Carolina used car lot has been inundated with messages meant for the owner of a similarly named towing business who refused to help a stranded Bernie Sanders supporter.

Ken Shupe, owner of Shupee Maxx Towing in Travelers Rest, made national news after boasting that God told him to leave a disabled woman stranded alongside a North Carolina interstate when he spotted stickers and signs supporting the Democratic presidential candidate.

“Something came over me, I think the Lord came to me, and He just said, ‘Get in the truck and leave,'” Shupe said. “And when I got in my truck, you know, I was so proud, because I felt like I finally drew a line in the sand and stood up for what I believed.”

Shupe's towing service's Yellow Pages and Facebook profiles have been flooded with critics who questioned his Christian sincerity and mocked his political views.

The Donald Trump supporter seemed eager to embrace the controversy.

Shupe had apparently never posted on the Facebook page for his towing service until Wednesday evening, after local news reports aired about his refusal to help the Sanders supporter.

He added Facebook profile and cover pictures of himself that apparently came from one of the news reports, along with links to some of those reports and an antagonist statement: "I have the right to service who I want to."

But another business, about two miles up Highway 25 from Shupe's now-infamous towing service, has been caught in the crossfire.

Lacey Johnson, who owns the similarly named Shupee's Used Cars, has been begging Shupe's critics to stop posting messages on her social media page and calling her auto lot.

"I take pride in my business and try to please all my customers," Johnson said on her business Facebook page. "We all have different beliefs, but I will not refuse service or selling a car to anyone that has different beliefs than me."

"I do not own a tow truck so I could not have left a woman stranded on the side of the road," Johnson added.

Shupe attracted his fair share of supporters, who defended his right to refuse service on the basis of political beliefs -- and others who suggested the Sanders supporter needed a "wakeup call."

But at least one critic suspected Shupe had another motive in embracing the controversy over his refusal of service.

"And his GoFundMe page begging for money because he is a poor, persecuted Christian goes up in 5, 4, 3..." said Facebook user Colleen Mahony. "And there will be morons that will send this con man money."