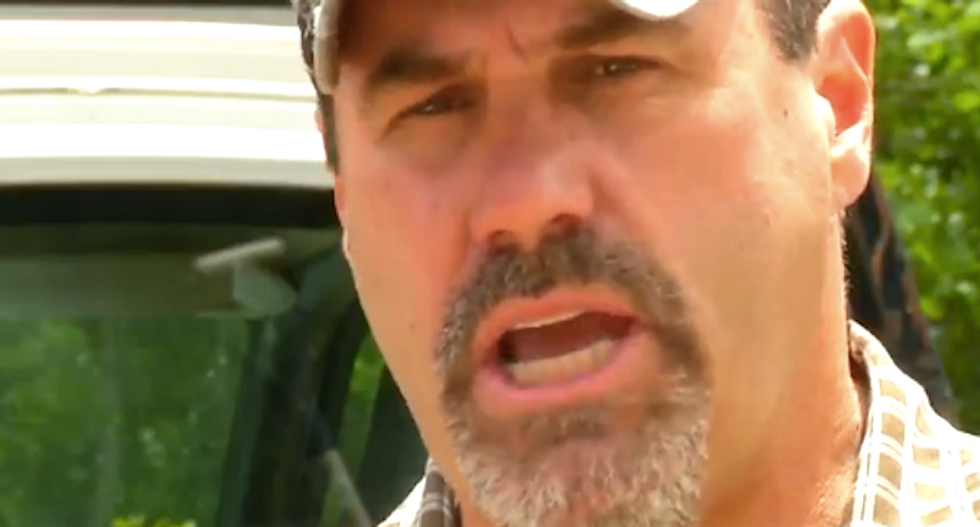 Cassy McWade was involved in a car crash near Asheville, North Carolina, and her family called their regular mechanic to drive 45 minutes north from his shop to haul her wrecked vehicle back for repairs, reported WHNS-TV.

Ken Shupe, owner of Shupee Max Towing, arrived about an hour later and began hooking McWade's car up to his truck -- until he spotted the Sanders campaign sticker on her bumper and the yard sign placed in her rear window.

"He goes around back and comes back and says, 'I can't tow you,'" McWade said. "My first instinct was there must be something wrong with the car, and he says, 'No, you're a Bernie supporter.' And I was like, 'Wait -- really?' And he says, 'Yes ma'am,' and just walks away."

Shupe offered a supernatural explanation for his decision to leave the 25-year-old McWade, who suffers from arthritis and other health conditions, alongside I-26.

"Something came over me, I think the Lord came to me, and He just said, 'Get in the truck and leave,'" Shupe said. "And when I got in my truck, you know, I was so proud, because I felt like I finally drew a line in the sand and stood up for what I believed."

The Donald Trump supporter then offered a more earthly explanation for stranding the customer.

"Every business dealing in recent history with a socialist-minded person I have not gotten paid," Shupe said. "I own this truck. It says, 'Shupee,' not 'freebie.' Every time I deal with these people I get 'Berned' with a 'e' -- not a 'u'."

McWade -- who suffers from psoriatic arthritis, fibromyalgia, chronic fatigue syndrome and early-stage Crohn's disease -- is legally disabled and displays a handicapped placard on her rear-view mirror, but the mechanic said he wasn't aware of her disability.

She said her family told Shupe about her health problems -- but he said it wouldn't have mattered much, anyway.

"Had she been disabled, would I have towed her car? No ma'am," Shupe said. "I would have pulled forward and sat there with her to make sure she was okay until another wrecker service showed up to get her home safely, but I still would not have towed her car."

"I stand by my decision, and I would do it again today if the opportunity presented itself," Shupe said.

The conservative Christian suggested he had a religious right to refuse service to Sanders supporters.

“I respect their beliefs, and I hope they respect my views,” Shupe said.

McWade waited alone for another half hour, terrified that her Crohn's disease would flare up, until another mechanic arrived, and she remains mystified by Shupe's behavior.

"I personally don't believe that you don't have to agree on anything just to be kind to one another," McWade said. "I was like, 'What did I do to you?' You know, I do believe I try to do right by people. So I was offended, and I don't know what exactly he thinks I would have done to him directly by being a believer in Bernie."