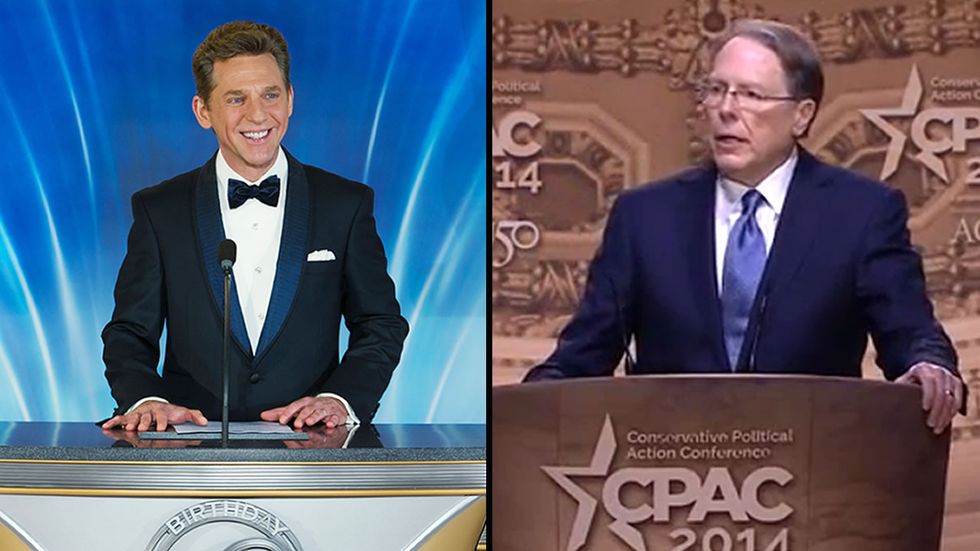 While the Church of Scientology and the National Rifle Association may not have a lot of overlap in membership, the two secretive organizations have a lot in common.

1. Secrecy in the face of controversy

Whether it's the massacre of school children at Sandy Hook Elementary in Newtown or the controversial shooting of Trayvon Martin, the NRA has a time-tested strategy of going silent in the face of scandal.

"You see, the NRA and its political minions like to work in the shadows," the Brady Campaign's Daniel Gross wrote in 2012 after George Zimmerman killed Trayvon Martin. "They cannot credibly explain to voters why they support loopholes that allow criminals to buy guns without background checks, or allow terrorists to buy all the AK-47s they desire. Secrecy and cynicism are their greatest allies."

Scientology has been known to employ a similar media strategy when books and movies expose the church: It refuses to comment on scandals, and then works in secret to discredit enemies.

"Scientology has become one of the most impenetrable and least understood new religious movements," Hugh B. Urban wrote in the Journal of the American Academy of Religion in 2006. "And the more scrutiny the movement has faced from the government, anticult groups, and the media, the more intense its strategies of selfconcealment have become."

Both Church of Scientology leader David Miscavige and NRA Executive Vice President Wayne LaPierre are notoriously secretive leaders who show up at events to deliver speeches from an insulated bubble and then disappear from media scrutiny without having to face questions from their followers.

Of statements by LaPierre that have been fact checked by Politifact, over 80 percent have been found to be half true, mostly false and false. But in recent years, most of his appearances are scripted speeches at NRA conventions and other conservative gatherings. And although he does occasionally grant a Sunday morning interview, he more often than not avoids the press for months at a time.

Miscavige is even more of a recluse. With the exception of a 1992 Nightline interview with Ted Koppel, Miscavige rarely emerges from his bubble to face scrutiny of any kind. Even the church's top celebrity member, Tom Cruise, is said to worship Miscavige "like a god."

Through funding pro-gun candidates, lobbying efforts and propaganda, the NRA has nearly mastered the ability to tilt the balance of power in Congress in its favor. It spends nearly 28 times the amount of money as all pro-gun safety groups to defeat candidates and even the most reasonable gun control measures, including the CDC's effort to use science to understand violent crime.

Likewise, Scientology's shady tactics against its opponents are well documented in HBO's Going Clear. Under its "fair game" policy, so-called suppressive persons (SP) “may be deprived of property or injured by any means by any Scientologist without any discipline of the Scientologist. May be tricked, sued or lied to or destroyed.”

NRA members who stray from absolute agreement can expect the organization to push back hard. When Sen. Joe Manchin (D-WV) tried to support universal background checks after the Newtown massacre, the NRA quickly organized against the longtime member to defeat the measure.

On the afternoon of Monday, April 15, Manchin was surprised to learn about an email that the N.R.A. had sent to his Senate colleagues. The email (a similar version of which went out to N.R.A. members) ended any pretense of neutrality by announcing that the organization would vehemently oppose the Manchin-Toomey bill. In addition, the organization said it would “score” the vote — meaning, it would factor into its election-year grading system how each senator voted on the bill. (In some conservative states, an N.R.A. grade can be determinative; as one former legislator told me, “When you come from a state like mine, you’d better be with them 100 percent.”)

Aghast, Manchin got Jim Baker on the phone. “Jim, why’d you change?” he recalls asking.

Rather than answer the question, Baker simply replied: “We’re totally opposed to it. We’re going to be fighting it with all we have.”

Scientology also saves its harshest attacks for members who turn on the church. After actress Leah Remini left the church, former member Jason Beghe told journalist Tony Ortega how the organization made life a living hell on defectors.

“These guys are crazy. And all of this shit is straight out of the L. Ron Hubbard playbook. That’s their scriptures," he explained. "They say they’re not a turn-the-other-cheek religion. No. they’re a knock-you-down-and-kick-you-in-the-balls religion.”

The missions of both the NRA and the Church of Scientology have strayed wildly from their initial charters.

The NRA was founded in 1871 as one of "America’s foremost pro-gun control organizations," Alternet pointed out in 2013. "It was not until 1977 when the NRA that Americans know today emerged, after libertarians who equated owning a gun with the epitome of freedom and fomented widespread distrust against government—if not armed insurrection—emerged after staging a hostile leadership coup."

And today, less than half of the NRA's revenue comes from members and programs. Between 2005 and 2013, the gun industry provided as much as $50 million in funds to the pro-gun organization. In fact, many companies in the gun industry donate a portion of their sales directly to the NRA.

Likewise, Scientology today is less about religious evangelism and more about using the church's tax exempt status to amass more than $3 billion in assets while having fewer than 50,000 members.

And good luck finding out where all that money is going.

According to Citizens for Responsibility and Ethics in Washington (CREW), the NRA has had nearly $60 million in undisclosed spending since 2008.

“It seems like every month we find more political activity that the NRA illegally failed to disclose,” CREW Executive Director Noah Bookbinder noted earlier this year. “The NRA’s consistent and egregious flouting of laws and requirements in its tax filings has become a disturbing pattern and needs to be investigated.”

As for Scientology, the IRS awarded the church tax exempt status in 1993 after a long fought battle. And because Scientology is recognized as a church, courts have ruled that it does not have to disclose its finances by filing IRS Form 990 like other tax-exempt organizations.