How Aristotle's ancient teachings can help you live the good life 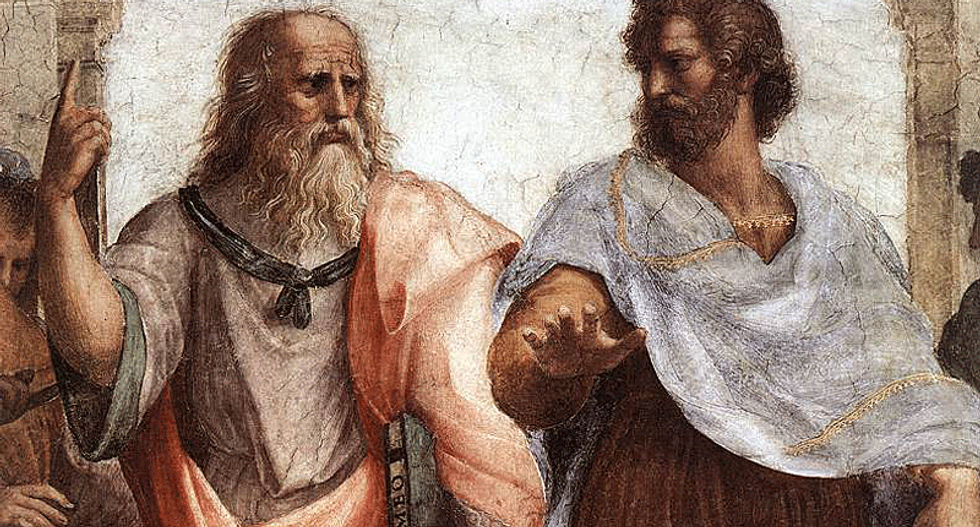 Plato and Aristotle, in a detail from Raphael's 'Scuola di Atene' (The School of Athens)

When we think of morally upright, virtuous citizens, do we imagine boring do-gooders? Is the idea of being virtuous out-dated and old-fashioned? Or is “being virtuous” still something we should aspire to in our contemporary society?

Prior to the notion of one Omni-God, Ancient Greek philosopher Aristotle (384-322 BCE) claimed that being virtuous was rational and good for everyone. The father of Virtue Ethics, Aristotle’s starting point wasn’t based on reward in another life or on categorical rules, but on what makes us essentially human.

In his Nicomachean Ethics Aristotle writes that we are essentially social, political and moral creatures because we live in a society and our behaviour affects one another. In this way being virtuous makes good sense because if people treat each other well, they’re likely to be content.

This suggests the wellbeing of the individual is linked to the place in which they live, and this idea is still supported today as psychologists claim our environment affects our physical and mental health and annual most liveable cities lists are enthusiastically shared.

For Aristotle, the purpose of life is eudaimonia, which is often translated as happiness, but is better understood as flourishing, so as to distinguish it from hedonism. A happy or good life is not one in which we have every single thing we desire, instead, it is about being fulfilled and feeling that we’ve contributed something to the world, however small or great, through the life we have lived. According to the virtue ethicist, this goal of eudaimonia is best achieved by following the virtues, and developing a good or virtuous character.

So how do we develop good moral character, and does this mean we’ll be boring do-gooders?

To practise the virtue of courage, I would consider the specific situation and think of what would be rash or cowardly and then consider what would be the mid-point or courageous thing to do in that situation. I may get it wrong, but Aristotle allows for the fact that we learn by doing things, and thus we can keep practising and get better at working out what is the right thing to do.

If I practise the virtuous action often enough, it eventually becomes a character trait whereby I don’t even have to think about it and my natural response is virtuous. For example, if I decide that honesty is a virtue (as it is mid-point between lying and bluntness), I may practice truth-telling until my usual response is to tell the truth when appropriate. Of course, this also allows for me to become less moral if I practice the vices and, for example, I could become a proficient liar if I work at it enough.

The usual criticism of virtue ethics is that it is too subjective, as the virtues are related to one’s own talents and abilities. For instance, my mid-point between lying and bluntness, my version of being honest, may equate to your version of being blunt. There is also much debate as to whether, say, “tolerance” is a virtue, or whether or not you should ever tell a white lie.

Yet, this weakness of the theory may also be considered as its strength. The subjective nature of the virtues allows for some social and cultural variance, and if this individual difference is respected, it need not be a bad thing but rather improve global harmony. If we respect the traditions of other cultures, provided they don’t cause harm, then most people would agree this is a good thing. Although what constitutes “harm” can still be a grey area.

But the pluralism of virtue ethics that accounts for context doesn’t deny that there are shared values. Generally, everyone will agree that we should avoid being cruel, and try to be kind, but we may interpret this slightly differently according to the time and place in which we live. This means that the theory of virtue ethics is flexible enough to still apply today.

So how does being virtuous help us today?

In today’s contemporary society it may be useful to consider how to virtuously engage in an ethical debate on social media. The excessive reaction may be to troll or bully others whose ideas differ to my own. The deficient response may be to not enter into the conversation at all for fear of confrontation or others disagreeing with me.

The midpoint between these two responses may be to have a reasonable discussion whereby not everyone has to agree, but we understand that we are contributing to an ongoing and meaningful conversation. Following the doctrine of the mean, this is the virtuous act. Sure, this doesn’t tell me what to believe, yet it hints as to how to communicate my ideas, based on respect and empathy and a fellow-feeling that recognises I am one among a community.

Therefore, the old-fashioned Golden Rule: treat others as you’d like to be treated still seems relevant today. Even in a technological world, following the virtues is useful because, by treating others well, I will also benefit. Furthermore, if the majority value virtuous behaviour, then the society in which I live allows for a good or happy life.

It seems that Aristotle is correct, and the virtues can be a useful guide in helping me to reach this goal of living the good life.

This is the first article in a series on public morality in 21st century Australia. We’ll be publishing regular articles on morality on The Conversation in the coming weeks.