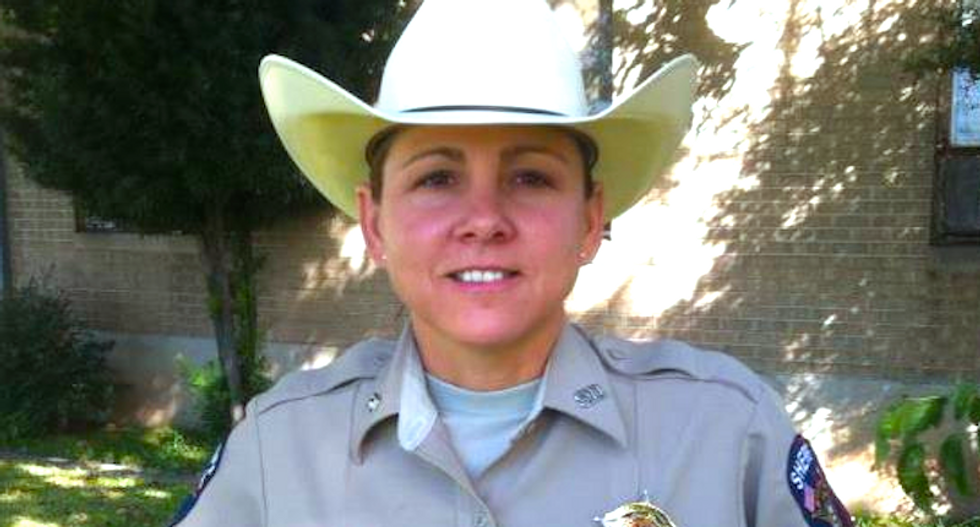 A so-called "constitutional" sheriff is accused of intimidating Democrats and Latinos in her Texas county -- which has been thrown into political turmoil since her 2012 election.

Sheriff Pamela Elliott has created an atmosphere of paranoia in Edwards County that causes her opponents to gather fearfully in "safe houses" to air their complaints, reported Alex Hannaford for the Texas Observer.

Elliott is a member of the Constitutional Sheriffs and Peace Officers Association (CSPOA), a right-wing coalition that encourages members to disobey laws they don't think are constitutional.

She put out a "standby order for volunteers" during the 2014 standoff at Bundy ranch, which was supported by CSPOA co-founder Richard Mack -- a former Arizona sheriff who suggested the anti-government militants use women and children as human shields during the armed confrontation with federal agents over unpaid grazing fees.

Elliott appears on the cover of Mack's 2014 book, Are You A David?, which promotes his right-wing, anti-government agenda.

Hannaford found few Edwards County residents who were willing to be quoted by name out of fear the sheriff would retaliate.

“I’ve been told to install a camera in my vehicle just in case something happens,” said one man, who would not allow his name to be used in print. “People here, officials included, are very wary of the sheriff.”

Some of the sheriff's opponents who agreed to be named told Hannaford tales of intimidation and retribution by the sheriff and her allies.

Local Democrats, who are greatly outnumbered in the county, said Elliott pushed her way into one of the party's executive committee meetings in 2014, as an "angry mob" of county employees and the sheriff's supporters waited outside a private home where the meeting took place.

“I was shocked that she was in uniform but wasn’t doing anything to control the crowd, keep the peace, or protect them or us," wrote Caroline Ramirez in a complaint filed with state officials. "She seemed to be encouraging the mob. I wanted to call someone, but I had no idea who I should call if the head of our law enforcement is part of the problem.”

David Velky, the superintendent of the county's Rocksprings Independent School District, chafed at the sheriff's efforts to involve law enforcement in school disciplinary matters -- which he said made an enemy of Elliott.

The superintendent and Elliott have sparred verbally through the media, and Velky said the sheriff recently flagged down two school board members as they were driving and ordered them to vote against his contract renewal.

“This is while she’s in uniform,” Velky told Hannaford. “I try not to be a conspiracy theorist, but I concluded this person either has some innate dislike for me or mistrust.”

The superintendent said Elliott's close relationship with Rick Light, the leader of the local Edwards Plateau Rangers militia group, causes him to fear for his physical safety.

Velky said he believes Elliott and Light are trying to take over county institutions so they can establish their own right-wing fiefdom.

“I believe the plan is to get rid of me and certain board members in order to take control of the school," Velky said. "I think they want control over the hiring of the teachers and staff members. I think they want to be able to bypass the procedural safeguards of the law — to arrest people without the grand jury, to bring charges without consulting the district attorney, to decide who is on the grand jury.”

That laundry list of "posse comitatus" aims matches up with rhetoric promoted by Mack and acted out by Ammon Bundy and other anti-government extremists.

Elliott has attempted to impose her right-wing agenda by intimidating Latino voters and elected officials -- including her September arrest of Mayor Pauline Gonzales on public corruption charges.

The mayor's husband performed $4,500 in remodeling work for the city, and she was indicted on four counts of official misconduct -- although Gonzales claims she did nothing wrong.

Elliott accused a former mayor, who is also Latino, of lowering the sewer rates for friends and family -- a claim the former mayor said could be disproven.

Rachel Gallegos, the former mayor, said Elliott sent her deputies into polling places in Hispanic neighborhoods during the 2014 midterm elections -- and she said the intimidation tactic worked on older voters.

“They just said ‘Oh, they’ll come after me -- they’ll go after my children, my grandchildren, it’ll just cause trouble,’” Gallegos said. “The elderly are easily intimidated.”

Gallegos said she called Elliott to complain, and the sheriff said it was none of her business.

The sheriff's office accused Gallegos' niece of voter fraud in September, saying the 42-year-old Reneé Gallegos-Johnson illegally voted in Edwards County, where she grew up, owns a home and plans to retire, despite working in Louisiana.

Gallegos-Johnson requested and received a voter registration ID from the county, and she said an attorney with the state attorney general's office told her she had not committed any offense.

“I think my last name must have screamed so loudly that I caught her attention,” she said.

Elliott also has a history of arresting Hispanic suspects on flimsy evidence, as both sheriff and as a police in Maricopa County, Arizona -- where CSPOA co-founder and "birther" conspiracy theorist Joe Arpaio serves as sheriff.

“That’s why the DA won’t take a lot of her cases — she’s a very intelligent woman and doesn’t want to go to court and have the cases thrown out," said Jay Adams, who worked for decades in the Edwards County Sheriff's Office.

Adams told Hannaford the evidence that led to four arrests in a cold case murder was ridiculous, and those charges were eventually thrown out.

"I read the affidavit and it’s written on an almost eighth-grade level," Adams said. "You can tell it wouldn’t float.”

Elliott is running for re-election in November, but she faces a tough Democratic challenger in fellow military veteran Jon Harris -- as well as a possible campaign finance violation.

She's accused of illegally accepting campaign contributions and making campaign expenditures to herself before appointing a campaign treasurer -- but she's carrying on with a Sarah Palin-esque appeal to voters.

"It’s no secret that I do not conform with any scripted expectations of ‘the political game’ when serving as your Sheriff," Elliott said in a campaign ad. "I will continue to serve as an Army Reserve Officer, a mother, a sister, a neighbor who is loyal to the Lord in a position that should not be politicized but as so scripted in the bible: ‘Do not pervert justice or show partiality.’”

Watch this video of Elliott describing her duties to a gathering of open carry activists: