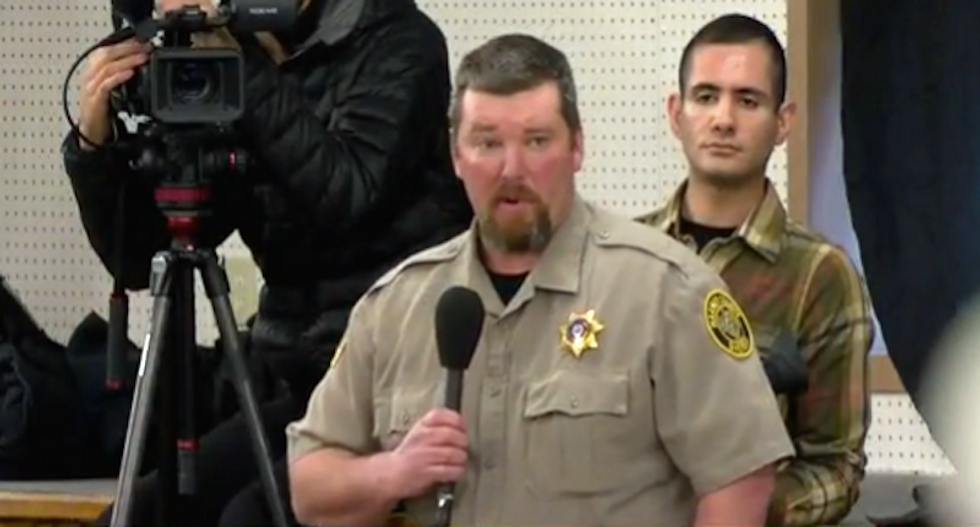 The Oregon militants may be plotting an extralegal maneuver to remove county officials -- or worse -- for failing to support their demands after taking over a federal wildlife preserve.

A group of residents established the Harney County Committee of Safety last month, after some of the militants arrived in the area and tried to recruit supporters of local ranchers Dwight and Steven Hammond -- who were ordered back to prison this week to finish their sentences for illegally setting fires on public lands.

The committee of safety -- made up of six community members, including a retired fire chief, two ranchers and the president of the county's Republican Party -- was formed to file grievances against the government.

The concept is promoted by so-called "sovereign citizen" groups and is based on shadow governments set up by the Continental Congress in the months before American Revolution, said J.J. McNab, an expert on right-wing extremist groups.

The Continental Congress in 1774 sent a list of demands, called the Declaration of Rights and Grievances, to King George III -- and the Bundy family and their backers sent a "notice (for) redress of grievances" Dec. 11 to several Oregon and Harney County officials challenging their authority in the Hammond case.

"We do not believe there is any threat to this community from this group," said Tim Smith, a committee member and president of the county GOP.

The committee will meet Friday evening, where they will presumably discuss state and local officials' refusal to acquiesce to their demands to release the ranchers from prison and turn over federally owned land to local control.

The safety committee also includes members of the III Percent, a loosely organized pro-firearms militia group, to help enforce the rulings of the "common law grand jury" formed at the same time in Harney County.

“After we organized the citizens’ grand jury together with a safety committee, we could take over lands through proper redress," said Michael Emry, founder and publisher of The Voice of Idaho -- and a common law jury activist.

A group of Emry's associates in the III Percent militia, including Bundy ranch sniper Eric "EJ" Parker, announced Friday afternoon they were on their way to the standoff in Oregon.

Similar bodies have been formed in Florida and elsewhere to "indict" elected officials -- President Barack Obama, in particular -- for perceived constitutional violations.

McNab said these phony grand juries indict on only one charge -- treason, which is punishable by death.

The Bundys have voiced support for a variety of right-wing fringe ideas, particularly the "posse comitatus" notion that no legitimate governments exist above the county level, and they believe in no higher law authority than the county sheriff.

However, posse members have embedded an implicit threat in their belief system.

If the sheriff violates his oath of office, as determined by the right-wing extremists themselves, "he shall be removed by the posse to the most populated intersection of streets in the township and at high noon be hung by the neck, the body remaining until sundown as an example to those who would subvert the law."

Sheriff David Ward, who was sworn into an interim term Jan. 2, said his elderly parents had been harassed since the militants arrived -- and his wife has left town after a group of strangers followed her home and she awoke to find her tire slashed.

The sheriff said he had received numerous death threats after saying he agreed with many of the militants' concerns -- but not their tactics.

“You’re not invited to come here and bother with our citizens,” Ward said. “I don’t believe that just a handful of people have the right to come in from outside of our area and tell us that we don’t know how to live our lives.”

McNab said she believes the militants may be planning to take the sheriff into custody if a common law grand jury indicts him.

One of the militants, Jon Ritzheimer, drew the attention of Capitol Police in September for his plot to "arrest" Sen. Debbie Stabenow (D-MI) for treason after she voted in favor of the Iran nuclear deal.

Ritzheimer, who is best known for his anti-Muslim rallies in Arizona, became infuriated after the Oath Keepers and some Michigan militia groups backed away from his plot to kidnap Stabenow and other elected officials.

It's not clear what the committee of safety has planned -- but local reporters say the county has set up added security and concrete barriers Friday outside the courthouse and the sheriff's office in preparation for a planned protest.