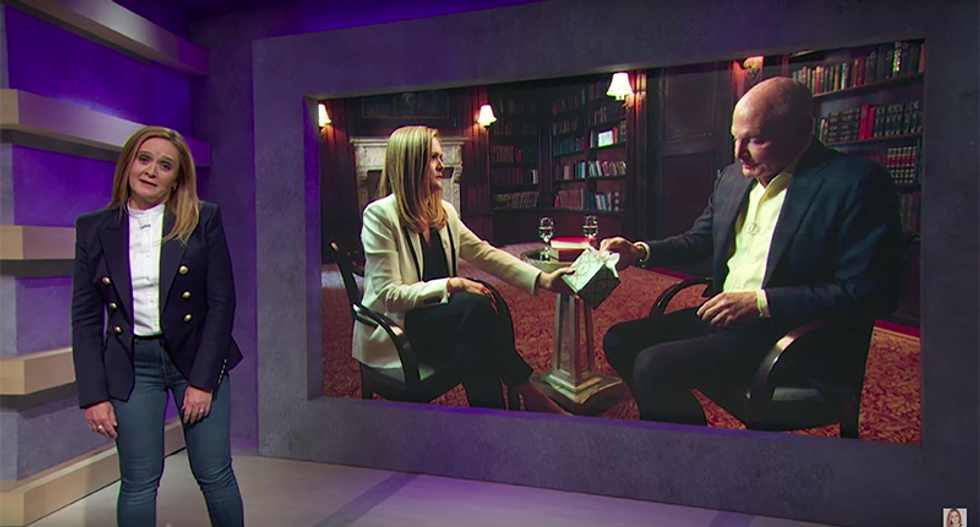 The only thing sadder than Jeb Bush's campaign are the stupid, wealthy, Republicans who donated millions of dollars to it. On Monday's "Full Frontal" Samantha Bee introduced the world to the rich guy who can't seem to stop giving money to losers.

If there's one thing that unites all of us, it's that we hate money in politics. The epicenter of that hatred stems from the million-dollar super PACs that collect secret money from rich donors, who buy their influence in an election. But Bee shows a different side of those sad saps who keep throwing their money away.

Mel Immergut is a rich lawyer who unfortunately wasted a ton of money on Mitt Romney in the 2012 election. "I don't seem to bring much success with me," he told her after recounting his support for Romney, along with Rudy Giuliani and Jeb Bush. Immergut described Romney's loss as "the biggest disappointment in my life. I went home the next morning and I went to Thailand and I communed with nature. And I went to South America on another long trip. And I came back and I didn't watch TV or read newspapers."

The poor rich man. The worst part is that after watching Romney get slaughtered in electoral votes, Immergut got sucked into another election with candidates who "never had a chance," Bee said while showing a photo of Bush.

"I want to influence as much as I can for the good of the country," Immergut explained. For example, he suggested that Jeb get himself some new suits as the campaign ramped up. Bee showed what the "world's most subtle makeover" looked like:

That's change we can believe in.

Bee confronted Immergut with a piece of direct mail that Bush's Super PAC sent out where they photoshopped Bush's photo on the head of a black man, but forgot to change the skintone of his hand. "Wow, it looks like he's wearing a glove," Imergut said in denial.

"Did they just photoshop out the black man who had his hands around Jeb Bush's hips?" Bee asked. Immergut acknowledged it was a really bad mistake.

"We would have been in good hands. One of them is African-American," Immergut said as his reason for supporting Bush.

The interesting thing about Jeb's leftover funds is that they're being returned to many of the donors. Not all of them, obviously, but some. Unfortunately for the donors, there are now laws or rules that protect donors from fraud, waste or abuse from super PACs. Bush's super PAC, for example, Jeb had a chair who paid himself an "undisclosed salary" with Immergut's cash and then hired his own company to make what Bee called "endless amounts of crappy ads."

There's no end to the cycle either. It's like the "Circle of Life" song in "The Lion King," except instead of hoisting young Simba into the air, it's a big, sweaty wad of cash. But because other candidates have them, the candidate you support has to have them, too.

Immergut admits that the whole thing is just too painful. He hopes he can stop the madness, but when Bee asked him who his pick was for 2020 Immergut started talking about Paul Ryan. The donor addiction seems tough to break.