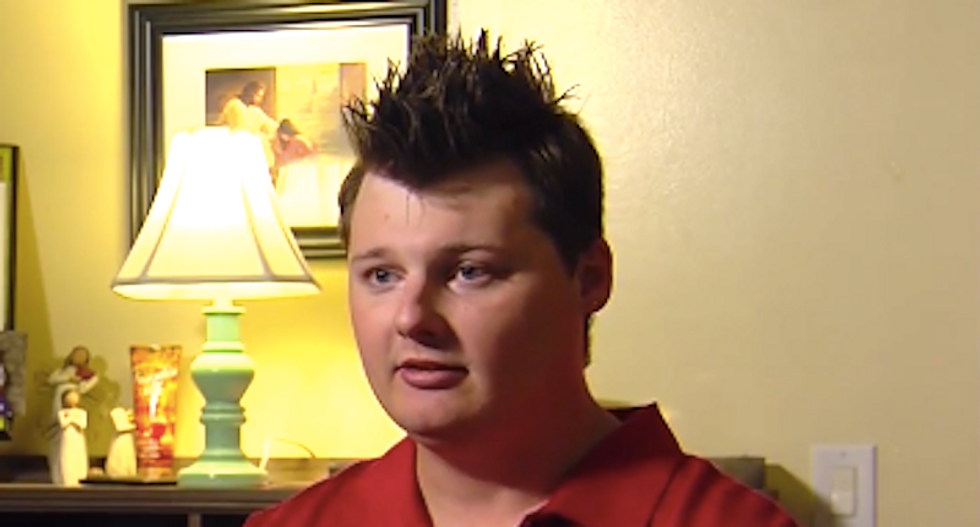 The national debate over who should be allowed to enter certain public restrooms took a strange and violent turn when a Utah father took his 5-year-old daughter into the men's room at his local Walmart.

Christopher Adams said his 7-year-old son, Kyler, and 5-year-old daughter, Emery, both had to use the restroom Sunday when their family went shopping at the Clinton store for blinds and storage bins, so he took them both into the men's room, reported KSL-TV.

They were quickly confronted by a man who did not think a girl should be allowed to enter a restroom designated for men.

“This guy walks in and goes to the bathroom, the urinal,” Adams told the TV station. “Then he just, like, turns to me and starts freaking out, dropping the F-bomb -- and what he was freaking out about was that my daughter was in the men’s bathroom.”

The man told Adams that it was "inappropriate," and then shoved the father after he gave him a terse response.

Adams tried to move his children away from the man -- who then escalated the conflict.

“When I turned back around, I got sucker-punched right here,” Adams said, pointing to his bruised left eye.

The man punched Adams several more times and kicked him in the knee multiple times, until the father was able to push his attacker out of the restroom and subdue him.

“I just slammed him on the ground and just held him until associates from Walmart could get there,” said Adams, who is 6-foot-3 and 250 pounds.

Police said the man, whose name was not released, was cited for disorderly conduct in the incident but not arrested.

The city attorney for Clinton is considering a possible assault charge against the man.

Adams said he's experiencing intense pain in his knee, and he may have suffered broken cartilage around his ribs.

Police encouraged anyone with concerns about what they see in public restrooms to notify store employees or law enforcement, rather than physically attack others.

The violent incident takes place against the backdrop of a national political debate over whether transgender people should be allowed to use public restrooms that correspond with their gender identity.

North Carolina has passed a law requiring transgender people to use the bathroom that corresponds with their birth gender, and anti-LGBT activists have loudly protested at Target, which has trans-friendly restrooms, in a series of viral videos.

The ACLU has said the states lack standing to bring the suit, and LGBT rights supporters say it might end up backfiring -- as a previous voter initiative did.

"We used to laugh about thanking the people who gave us Amendment 3," said Marina Gomberg, board chair of Equality Utah.

U.S. Senator-elect John Fetterman on Friday announced two key staff hires for his office on Friday, including tapping the author of a book calling for the abolishment of the arcane Senate filibuster to be his next chief of staff.

The Pennsylvania Democrat said in a statement that he has hired Adam Jentleson to oversee his D.C. office as chief of staff and that longtime party operative and labor organizer Joseph Pierce will be his state director.