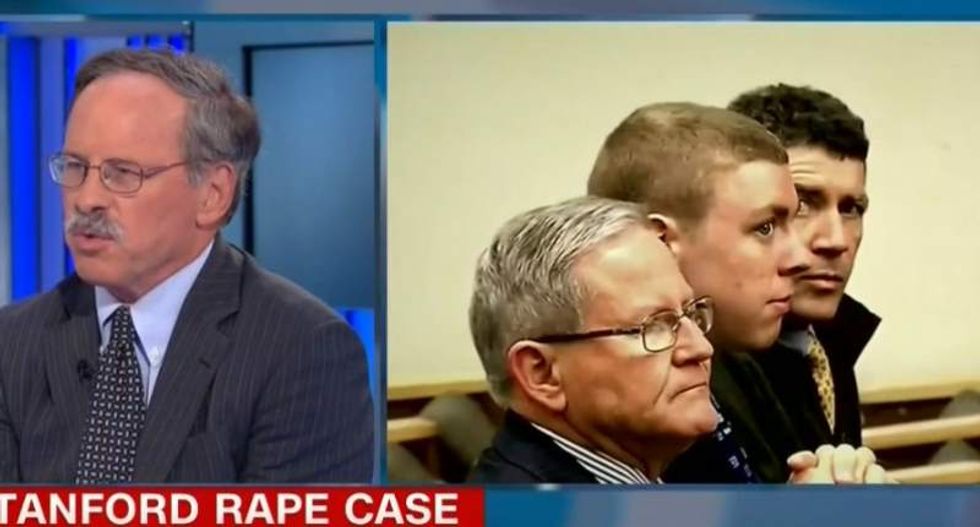 Attorney Stuart Taylor Jr. argued on Thursday that while Brock Turner got an exceedingly light sentence in his rape conviction, "the system worked" in his case.

"Although six months was a light sentence in the sense of that's not a lot of time to be in jail, he also has hanging over him this sex offender registry thing," Taylor told CNN host Jake Tapper. "For the rest of his life, everywhere he goes he's carrying a brand. He probably never will be able to go to college -- at least no time soon. His life is pretty well ruined. Those who say, 'He's not really being punished,' it seems to me, are missing the point."

Persky worried that a harsher sentence would have "a severe impact" on the former college swimmer, prompting an online petition to recall him that has garnered nearly 950,000 signatures and at least 10 prospective jurors to refuse to serve in his courtroom.

Taylor also downplayed race as a factor in Turner's sentencing, pointing to the conviction of Sam Ukwuachu -- like Turner, a collegiate athlete, but in football -- for what he called a "far more serious" attack.

"He was convicted of a very serious rate, he got six months -- he's black," Taylor said of Ukwuachu. "So, I think we've got a problem with the criminal justice system being pretty tough on blacks, but I don't think anybody's made a persuasive case that [Turner] got lighter treatment than he would've if he weren't a privileged white male."

The interview brought to mind a heavily-criticized CNN segment in 2013, when correspondent Poppy Harlow expressed concern over the sentencing of two high school football players in Steubenville, Ohio for assaulting a 16-year-old girl.

Harlow said at the time that it was hard to see "such promising futures, star football players, very good students — literally [watch] as they believed their life fell apart."

Watch Tapper interview Taylor, as posted online on Thursday, below.