CNN host grills GOP lawmaker over Benghazi report: What’s the point of any of this? 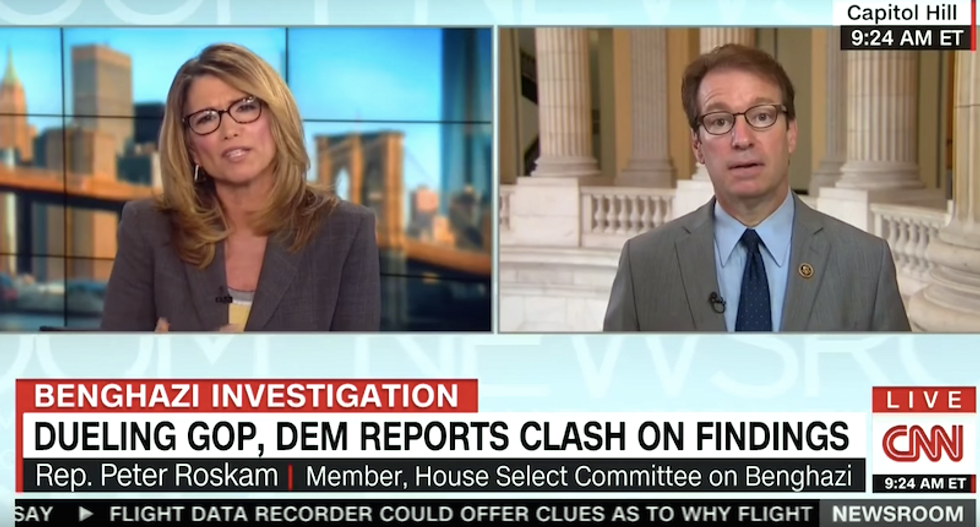 CNN's Carol Costello asked a Republican congressman to explain the purpose of the months-long Benghazi investigation -- but he was unwilling or unable to suggest any substantial changes based on the report's findings.

House Democrats released a separate report clearing former Secretary of State Hillary Clinton of all wrongdoing, but some conservative members of the Benghazi committee released an addendum because they didn't think the final GOP report was critical enough of the Democratic presidential candidate.

"Conservative Republicans on the committee are going to release their own addendum," Costello said. "They don't agree with the report either."

Roskam insisted those dissenters agreed with most of the findings, but they wrote an additional report to "highlight and bring into contrast some of the political issues" suggested in the report.

"Washington failed," Roskam said. "Washington completely was acting as if that was somebody else's family that was under attack. The officials in Washington, from the State Department to the White House to you name it, the Department of Defense, were slow-moving. There was never a force that was going to be deployed to Benghazi. That’s what the report finds. Never. Isn’t that shocking? Isn’t that jarring?"

Costello pointed out that an Accountability Review Board had made 29 recommendations to avoid similar mistakes, and the State Department had already adopted 28 of those.

Roskam said Republican lawmakers simply wanted to gain "a thorough understanding of what actually happened," and he urged Americans to spend "several hours" reading the 800-page report to understand what mistakes were made.

The congressman said the consequences had already been borne by the families of the four Americans killed in the 2012 attack, but Costello pressed on.

"I guess I’m talking about who should be punished, for lack of a word, because of all of these mistakes that were made?" she said.

"The entire system failed them," Roskam said, and then described some of the bureaucratic and tactical errors that he believes contributed to the deaths.

"Those types of things are absurd -- they're scandalous," Roskam said. "But you know who bears the burden? The people who bear the burden are the ones who lost their lives, and that's the shame of this."