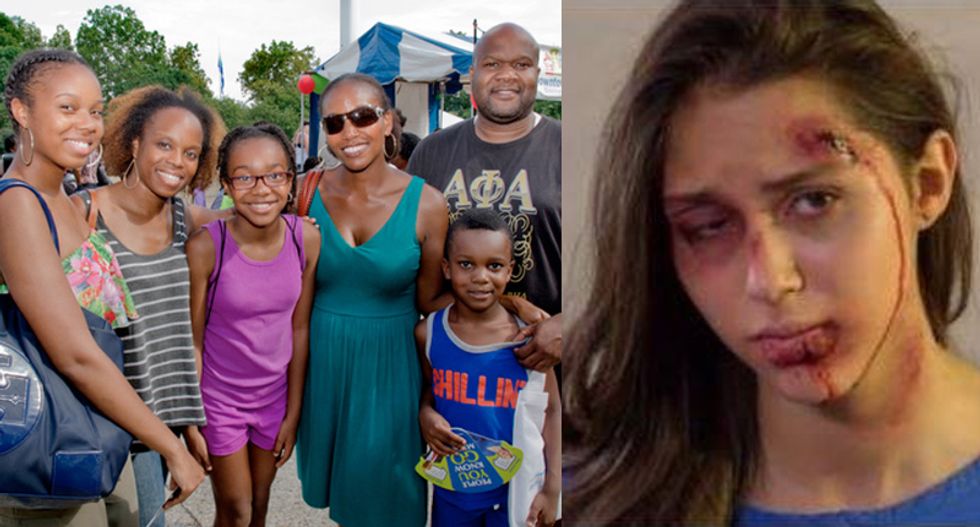 Not fans of Donald Trump

Strange as it may seem, the face -  to say nothing of the stubby-fingered hands -- of the Republican Party has a bit of a problem with people of the non-pasty-white persuasion in the the upcoming election.

According to the polls (which are always skewed unless they conform to your world view or expectations) Donald Trump has a tenuous grasp on about 12 percent of the black vote, 28 percent of the Hispanic vote and 11 percent with Muslims -- probably with a margin of error of 11 percent.

In fact, Trump only polls at 19 percent with Asian-Americans and he hasn't even insulted them yet. But there are still months to go in this seemingly endless slog to the Nov. 8 election, so give him time to alienate them somehow because you know he will.

Like all things Trump, appearance (being rich or smart or popular or having a slightly larger than average penis) is more important than the reality. Because he has to create the appearance of having a "yuge tent" of many colors, the Trump campaign has gone out of its way to make itself look like a United Colors of Benetton ad.

Earlier in the week, Trump was accused of racism after saying an Indiana-born judge, who ruled against him over his sleazy Trump University operation, was biased because of his "Mexican heritage." The Trump rapid-response Twitter team quickly retweeted a photo of a lovely African--American family who are big Trump fans.

And it was bullshit:

Whoops. Meet the Perry family of Ohio: not Trump fans.

Eddie Perry said the picture of his family that Trump shared was “misleading” and “taken out of context.” “I’m not saying there aren’t black families who endorse Trump,” he said, “however, this black family didn’t endorse anyone.”

Then there was Gregory Cheadle, pointed out by Trump at a California rally as "my African-American" in what can only be called a "Otis! My man!" moment. As people used to say on the Internet: Sadly, no!

“People around me were laughing [at the fact] that he noticed me and everybody was happy. It was a jovial thing. Had he said, ‘here’s my African American friend’ or ‘my African American supporter’ or something like that, then there would be less ambiguity,” Cheadle said. “I am not a Trump supporter. I went to go hear Donald Trump because I have an open mind.”

But surely Trump is doing well with Hispanics, right? Earlier in the week, fights broke out at a Trump appearance in San Jose, California and some Trump supporters were assaulted -- which is not cool, you guys. It wasn't enough that a white female Trump supporter was filmed being cornered and egged which was replayed over and over again on national TV; Trump fans needed an ethnic angle. You know -- a race traitor punished by the heavily Hispanic crowd waving their Mexican flags. So this popped up on Twitter and heavily on Facebook:

What if this was your daughter?

Not a word from San Jose Mayor

not a word from Obama

not a word from Hillary

not a word from Bernie

The only word was from Trump Condemning this, the San Jose Mayor justified the beatings and the police watched on and did nothing.

If we don't Vote Trump in this Country will be a 3rd world Hellhole.

And, nope again, according to Snopes:

The reason that Hillary Clinton, Bernie Sanders, President Obama, and San Jose's mayor have not commented on the image displayed above is that this photograph was not taken at a Trump rally in San Jose in June 2016. This is a screenshot from an episode of La Rosa de Guadalupe, a Mexican drama series.

To be fair to the Trump's people, they're trying. Previously Trump Twitter was full of retweets from white supremacists like @WhiteGenocideTM. So, at the risk of losing his racist followers (aka: Trump's base) he's trying to seem inclusive -- even if it's fake.

As long as your followers know deep down that it's all bullshit and whose side you're really on.