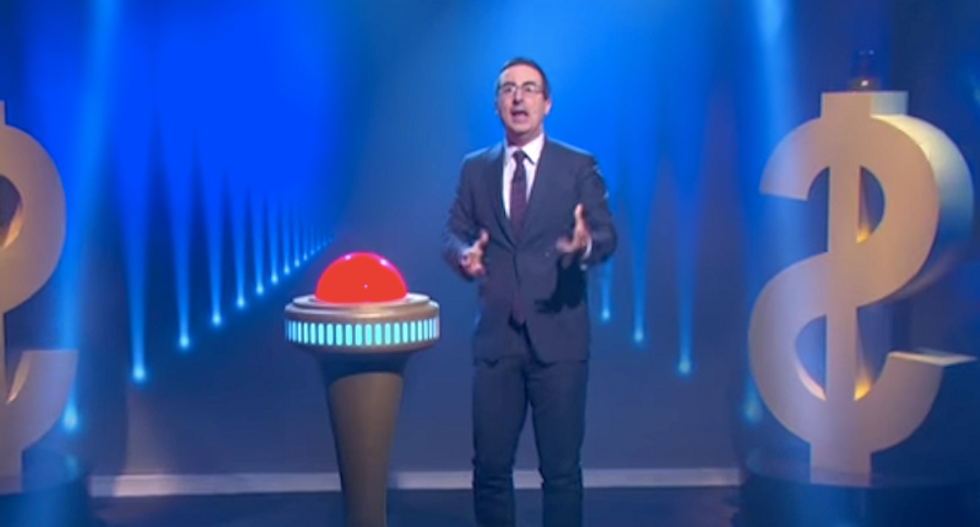 John Oliver forgave nearly $15 million in medical debt -- beating that time Oprah Winfrey bestowed $8 million in cars -- in what appears to be the largest giveaway in television history.

The "Last Week Tonight" host took aim Sunday night at shady companies that buy up debt from collection agencies and then sell off the debtors' personal information to third parties as they attempt to collect the money that's owed.

Oliver and his producers demonstrated just how easy it is to set up one of those debt-buying agencies by setting up one themselves and then buying $14,922261.76 in debt for less than $60,000.

"It was disturbingly easy," Oliver said.

WATCH: John Oliver unloads on Donald Trump and his shady ‘university’ — and it is epic

The show spent $50 back in April incorporating a debt acquisition company online in Mississippi, calling their corporation Central Asset Recovery Professionals -- or CARP, "after the bottom-feeding fish."

The debt Oliver bought was technically out-of-statute, meaning creditors could not actively collect the money owed because the obligation had passed the statute of limitations, but CARP was given the names, current addresses and Social Security numbers of nearly 9,000 people who owed money for medical care.

"We bought it, which is absolutely terrifying, because it means if I wanted to, I could legally have CARP take possession of that list and have employees start calling people, turning their lives upside-down over medical debt they no longer had to pay," Oliver said. "There would be absolutely nothing wrong with that, except for the fact that absolutely everything is wrong with that."

So, instead, Oliver and his team decided to forgive that debt in the largest one-time giveaway in television history -- worth even more money than the 2004 stunt in which Winfrey gave away cars to her studio audience.

Oliver never took possession of the debtor list but instead had it sent directly to RIP Medical Debt, a non-profit organization that specializes in forgiving medical debt with no tax consequences for the debtor.

"Are you ready to make television history?" Oliver asked. "Clearly, this is only going to help the 9,000 people whose medical debt we bought. The larger issue is, we need much clearer rules and tougher oversight to protect consumers from potentially predatory companies like the one we set up. But in the meantime, it seems the least we can do with this debt that I cannot f*cking believe we are allowed to own is to give it away."

"You are about to watch me give away $15 million," Oliver said, and pressed a comically large red button that signaled the start of the debt-forgiveness process. "F*ck you, Oprah!"