WATCH: John Oliver unloads on Donald Trump and his shady 'university' -- and it is epic 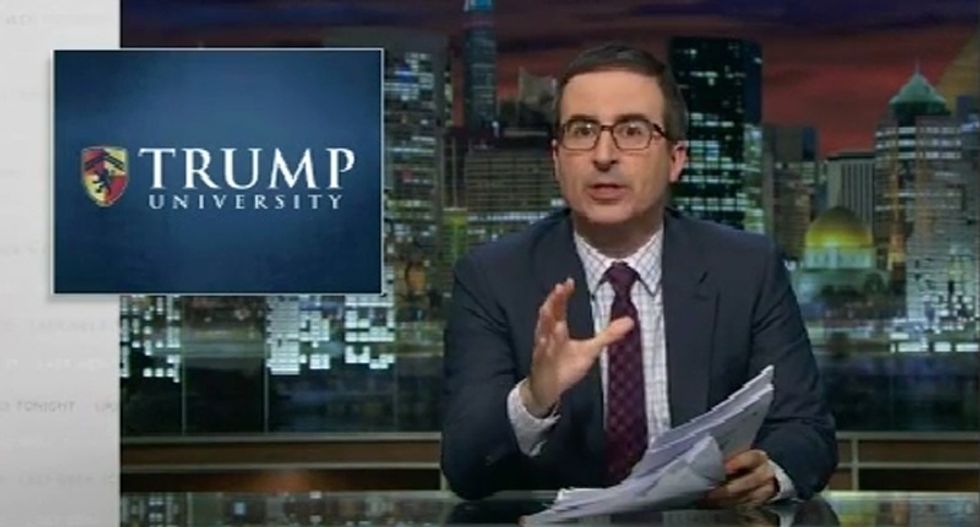 After touching upon Trump's racist comments about Judge Gonzalo Curiel's decision to release documents on the get-rich-quick school, the host took a deep dive into revelations about the so-called "university" and its "hand-picked instructors."

“Trump University wasn’t even a university. Which makes you wonder what the fuck was in Trump Steaks?” Oliver said before suggesting the steaks might possibly have been possum meat.

“But the name was just the beginning," he continued. "Because, remember how he had ‘handpicked instructors?’ Well, according to his own depositions, he did not personally select instructors for live seminars, and he was unable to recall the names of key faculty members.”

Oliver added, "According to the sworn testimony from several former employees, many instructors and mentors had no experience buying and selling real estate. In fact, one had previously worked as a salesman for Lowe’s, while another had been district manager for Buffalo Wild Wings."

After pointing out that a former employee claimed the school was in the business of selling "false hopes and lies," Oliver conceded that Trump University did have some similarities to real schools, puckishly adding, "Every university has sold some of its students false hopes and lies. It's just that most of the time they call it a 'theatre arts degree.'"

After detailing high pressure techniques found in the Trump University "typo-ridden playbooks" --  telling salespeople to not let prospective students walk because, “Money is never a reason for not enrolling in Trump University; if they really believe in you and your product they will find the money. You are not doing any favor by letting someone use lack of money as an excuse,” -- Oliver unloaded on Trump.

“'Lack of money is not an excuse' is not what single parents need to hear, it is what Donald Trump needs to hear when a fifth company of his inevitably files for Chapter 11 bankruptcy,” he exclaimed.

Noting that prospective students were also promised an opportunity to have their picture taken with the great man himself, Oliver pointed out that those pictures were taken with a cardboard cutout of Trump instead.

“That is actually a perfect metaphor for Trump University. You’re expecting the real thing, but in the end, all you get is a tacky two-dimensional façade with Donald Trump’s face slapped on it," he smirked.