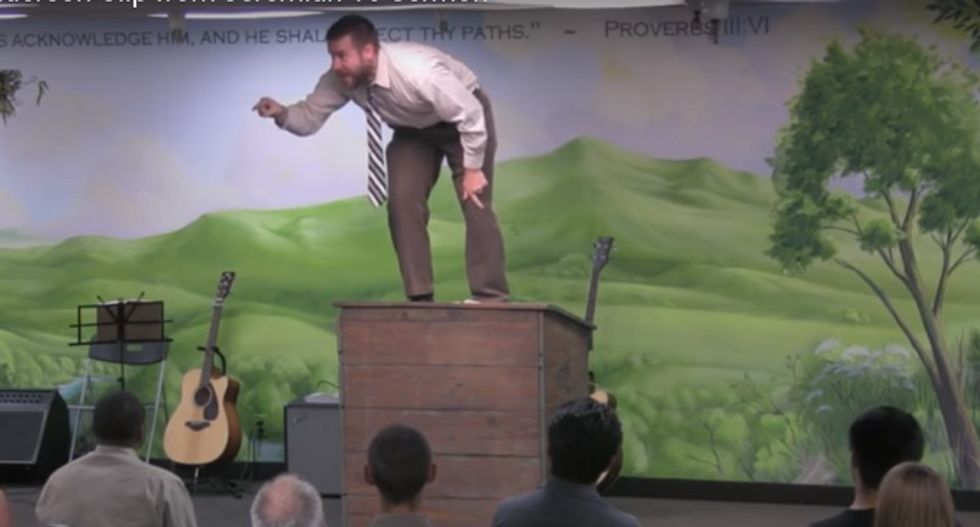 An Arizona pastor known for his virulently anti-LGBT views went on a podium-stomping tirade recently after businesses began cutting off their services to his and other bigoted pastors' churches, the Friendly Atheist reports.

Pastor Steven Anderson, who heads the Faithful Word Baptist Church in Phoenix, Arizona, lashed out this week at activists who successfully petitioned businesses like PayPal and Apple to shut down his accounts after his hate speech. While Anderson posted his June 22 sermon on a website called Archive, the Friendly Atheist uploaded a sampling to YouTube.

After the June 12 massacre at Pulse nightclub in Orlando, Anderson posted a video in which he said there are "50 less pedophiles" in the world. Forty-nine people were killed in the mass shooting at the gay nightclub.

Anderson has been reaping the consequences of his words, and he is not happy about it.

Anderson was referencing Roger Jimenez, a California pastor who made headlines and earned widespread condemnation when he cheered the actions of the Orlando shooter for attacking LGBT people.

"I think that’s great. I think that helps society. I think Orlando, Florida’s a little safer tonight,” Jimenez said in response to the attack. “It is unnatural for a man to be attracted to another man. The tragedy is that more of them didn’t die.”

He was also referencing Texas pastor Donnie Romero, who weighed in saying he agreed with Jimenez.

“These 50 sodomites are all perverts and pedophiles, and they are the scum of the earth, and the earth is a little bit better place now,” he said in a sermon following the massacre.

Anderson was clearly angry that these words have come back to haunt them.

He then jumped up on his podium and started pointing at the audience.

"And you know what, if you're not gonna back us up then get out of here, we don't need your help," he said, before launching into an invective-filled rant calling LGBT people "dogs."

Watch the clip, as posted by the Friendly Atheist, here: