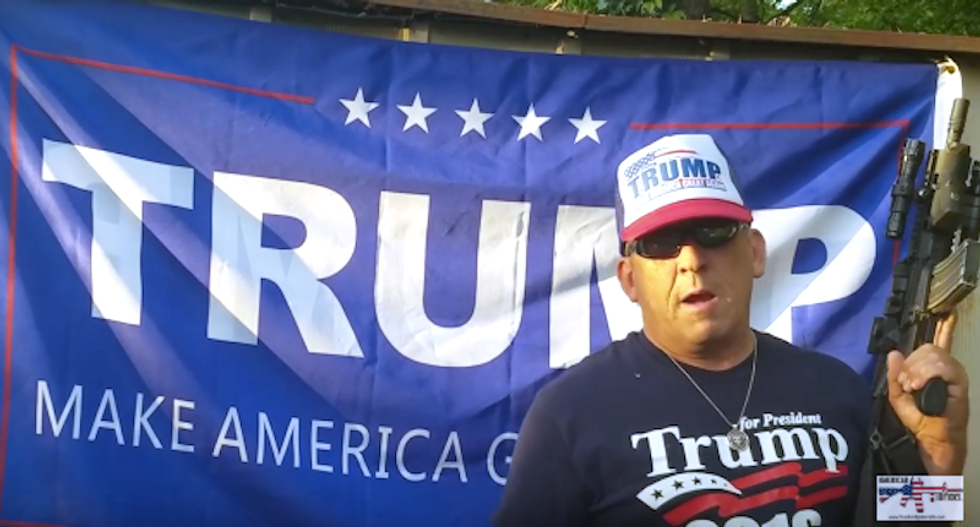 A disgraced police officer called on militia members and "lone wolf patriots" to bring their guns to Cleveland to do battle with black protesters at the Republican National Convention.

"I am encouraging patriots and Trump supporters and those that support liberty and freedom to come lawfully armed with lethal and non-lethal weaponry," said Jim Stachowiak, a right-wing activist and former police officer, in a video posted on his YouTube channel.

Stachowiak, who has been banned from Facebook and charged with criminal defamation for falsely identifying a LinkedIn user as a terrorist, said Black Lives Matter activists -- a group he calls "Black Lies Matter" -- had threatened to kill Donald Trump.

"They have threatened to cause riots in Cleveland and nationwide," said Stachowiak, who lost his police certification following a misconduct investigation after just three years as a public safety officer. "It is our sworn duty and obligation for all those like me and many of you who have taken the oath to defend this country against all enemies foreign and domestic."

He called out to military veterans and right-wing groups such as the "III Percent" militia to intimidate anti-Trump protesters in case law enforcement or the National Guard are unable -- or unwilling -- to take violent action.

"We should answer the call with our Second Amendment," Stachowiak said, hoisting a military-style rifle and aiming at the camera. "Yes, I'm encouraging patriots to come prepared to defend this nation against a domestic terrorist organization supported by the terrorist in the White House, Obama."

Stachowiak, who made news last year for standing guard with a rifle outside military recruiting stations, claimed Black Lives matter had called for genocide against non-blacks and a bombing campaign against nurseries.

"This is going to be called racist, what I'm about to say, such as the rapper Ted Poe," Stachowiak warned. "I'm going to call them what they have called themselves. Ted Poe said, quote, and I quote, We n***as are prepared to start riots should Donald Trump be nominated as the Republican candidate. Well, patriots, if the people Ted Poe refers to himself as n***as -- and again, this is the label they have called themselves -- decide to get violent and the police stand down and the police cannot guarantee the safety of American citizens, it is our constitutional and lawful duty to protect those in fear or danger or the imminent threat of serious loss of life and bodily harm."

Stachowiak misstated the dates of the Republican National Convention, which will be held July 18-21, as being scheduled for April -- which is when an anti-Muslim rally he organized outside the Georgia Capitol managed to draw one single attendee.

"Come prepared, because this may spark another revolution," Stachowiak promised. "It won't be decided if that spark turns into a bonfire by we who love liberty, for we will defend, not attack. We won't act, but we will react."

He then flipped off the camera in case President Barack Obama or U.S. Attorney General Loretta Lynch happened to see his online video and object to his message.

Stachowiak inaccurately claimed a Black Lives Matter activist had been arrested for child pornography, and he cited a hoax news report about a black activist accused of murdering white women and stuffing their bodies in a freezer.

“The Black Lives Matter want to attack those of us for merely supporting a candidate,” he said, pointing at Trump’s name on a banner behind him. “Let’s answer the call, people.”

He dared black protesters to burn an American flag outside a military base, as he fidgeted with his rifle.