WATCH: John Oliver lambastes lawmakers for continuing to block gun research as the bodies pile up 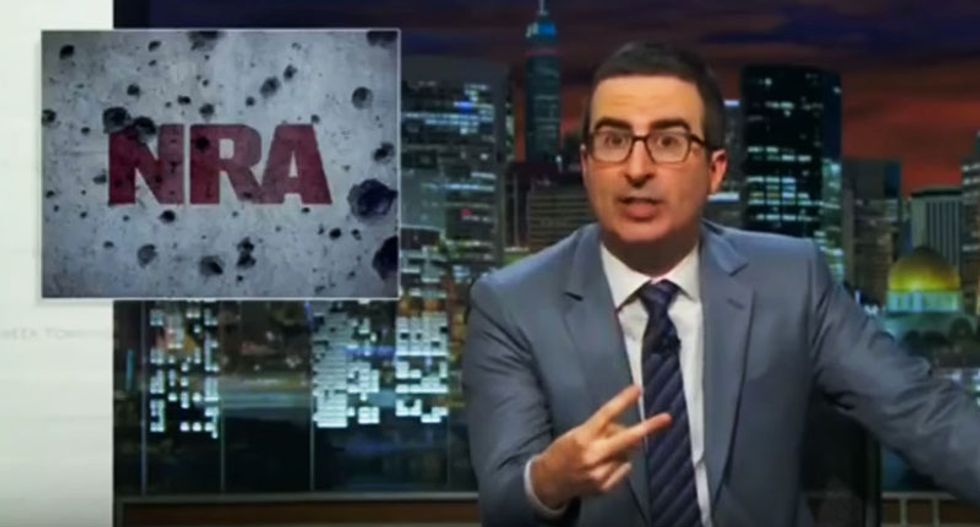 On Sunday evening, Last Week Tonight host John Oliver picked up where he left off last week, this time using the mass shooting in Orlando to delve into why lawmakers consistently refuse to pass sensible gun laws, with the HBO host pointing the finger at the usual suspect: the NRA.

Describing the NRA as "like PETA, but for guns, and effective," Oliver explained how the gun organization keeps lawmakers in line, not only through contributions, but by effectively organizing their members to inundate their congressmen with phone calls demanding they do nothing about our porous gun laws.

"Here we are again," Oliver stated. "After another mass shooting, with weak legislation doomed to failure. And there is clearly a disconnect between public opinion which favors, to varying degrees, a number of different gun control measures and any practical action in Washington."

Of particular note were clips he showed of lawmakers explaining that there is no evidence indicating whether gun laws prevent shootings, while on the other hand refusing to fund studies to investigate.

"One of the major funders for academic research, the Centers for Disease Control, has been hamstrung in studying how best to prevent gun violence for the last twenty years," the HBO host stated, pointing out that the NRA had language inserted into the CDC's budget, stating: "none of the funds available ... may be used to advocate of promote gun control."

"Now, the CDC was already banned from advocating for gun control laws, or indeed any form of legislation," he explained. "But the 1996 Dickey Amendment -- named after both its sponsor, Jay Dickey, and after the fact that it was an extremely dickey thing to do -- had a chilling effect on the CDC funding any gun research at all."

"The only two other things that have dropped 96 percent in the last two decades are Lycos searches and Tickle-Me Elmo-related stampedes," Oliver quipped.

Oliver wrapped up the segment by passionately pleading with viewers to contact their lawmakers -- every day if need be -- to repeal the Dickey Amendment.

"It's not about gun control. It's enabling us to have an informed opinion about what that could look like," he exclaimed. "If and when a proposal is on the table that you like, you're going to have to make all those calls again. It doesn't take much to outnumber the NRA ... But if you want to see serious changes, you actually have to show up every f*cking day."