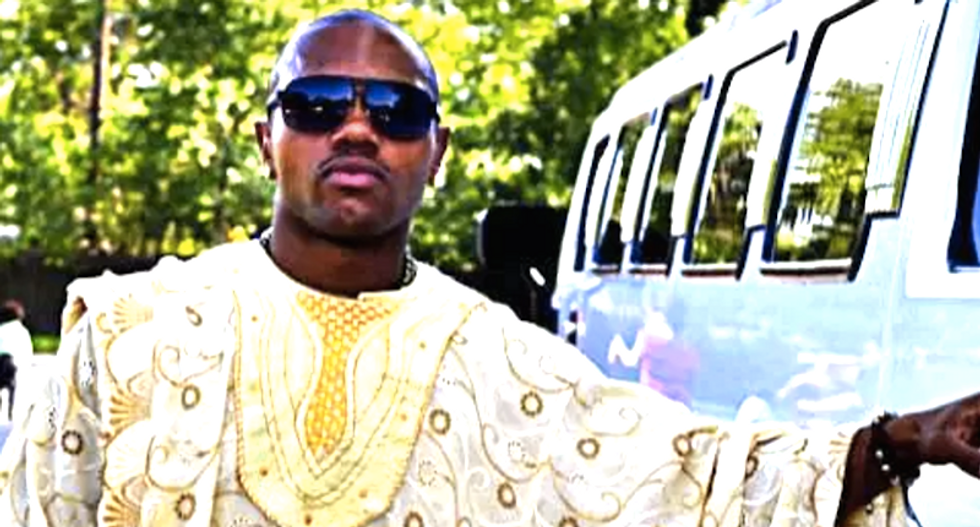 The gunman who killed three Baton Rouge police officers Sunday apparently believed most laws did not apply to him because he'd declared himself a "sovereign citizen."

Long, who served five years in the U.S. Marines and about six months in Iraq, posted YouTube videos and social media tips about achieving “complete and full masculinity," and he shared the anti-government views of the loosely organized sovereign citizen movement.

“This group believes that they are indigenous to the continent and therefore above all federal, state and local laws,” said author J.J. MacNab, an expert on anti-government extremists and a fellow at George Washington University’s Center for Cyber and Homeland Security. “(Those) documents show Long’s attempt to separate his flesh and blood ‘indigenous’ self from his legal entity self.”

He put those anti-government beliefs into action after becoming increasingly angry over the police shootings of unarmed black men, saying that non-violent protest had accomplished nothing.

Sovereign citizens are fairly easy to spot in news reports, even when their affiliation isn’t specified.

Adherents claim immunity from federal, state, and local laws, citing God’s law or common law over constitutional authority, and they frequently use fake driver’s licenses issued by the “Kingdom of Heaven” or phony Native American tribes and place hand-drawn license plates on their vehicles.

Sometimes they carry weapons or threaten others with them, and they often file bogus court documents and act as their own attorneys.

The sovereign citizen belief system originated about 40 years ago in the deeply racist and anti-Semitic Posse Comitatus movement, which teaches that the government has authority over only those citizens who submit to a contract.

And: A science fiction author ponders the sovereign citizen mind

The Posse Comitatus movement also teaches that black Americans were made citizens by the 14th Amendment and were therefore bound under permanent contract to the U.S. government.

But the idea that tax and criminal laws can be nullified by individuals who exploit certain loopholes or incant the correct words in the proper order proved irresistible to some black Americans – just like their white counterparts.

“These people really seem to feel that filing certain kinds of legal papers that are connected to their theories will somehow also magically have the power to alter relationships and grant things that otherwise would be unobtainable,” said Michael Barkun, a retired Syracuse University political science professor.

The anti-black sovereign citizen movement’s teachings turned out to be highly adaptable to some who claim to be followers of Noble Drew Ali, who founded the Moorish Science Temple of America in the early 20th century.

Some of those calling themselves “Moors” believe they are entitled to self-governing status as a nation within a nation – giving them rights that predate the Constitution, just as sovereign citizens believe."

But officials with the Moorish Science Temple of America said Ali never taught that member should not recognize U.S. government authority. In fact, Ali taught that "all members must obey the laws of the government, because by being a Moorish American, you are a part and partial of the government, and must live the life accordingly."

The Nation of Islam arose from the Moorish Science Temple movement after the death of Noble Drew Ali, which splintered the organization.

“We do not follow ‘sovereignty,’” said Brother R. Jones Bey, grand sheik of the Moorish Science Temple. “The prophet never talked about that. Our organization has been misunderstood by people who see the value of our religion but don’t want to conform. They are not members of our organization.”

Moorish sovereign citizens often cite treaties signed more than 200 years ago between the U.S. and Barbary Coast states, which a retired judge – who studies history in his time away from the bench – said were no longer valid.

“Those treaties were with nations that existed independently for a short period of time, [and] any treaty was totally abrogated by subsequent events initiated by the Barbary states,” said retired judge Robert McLeod, who served on the bench for 17 years in New Jersey. “I simply rattled that off at them, and they looked at me blankly, took off their robes and fezzes, and went back to their birth names and pled guilty.”

New Jersey is a hotbed of Moorish sovereign citizen activity – including a man who was ordered to stand trial in 2014 on a variety of charges despite his claims to be the Crown Prince Emperor El Bey Bigbay Bagby.

A recent study found that law enforcement agencies consider sovereign citizens to be the top terrorist threat in their communities.

Although some adherents of the loosely organized movement have been involved -- like Long -- in violent confrontations with law enforcement or community members, federal authorities say they more typically commit acts of “paper terrorism.”

Sovereign citizens might file dozens of bogus court documents written in nonsensical language that claim exemption to the law and government authority, and Moorish adherents often use exotic-sounding pseudonyms in an attempt to avoid legal responsibilities.

They’ve also been implicated in real estate scams – such as filing phony paperwork and squatting in homes until property owners can force them out through costly court battles.

Moorish sovereign citizens, like their white counterparts, frequently file false liens – which must be accepted in many states without judgment of validity — against public officials and others as a form of harassment.

The practice has become so commonplace that the National Association of Secretaries of State released urged state officials to find ways to speed up the removal of liens and increase penalties for fraudulent filings.

More recent converts could be attempting to claim for themselves some of the privileges enjoyed by corporations and super-wealthy individuals — who avoid taxes and other responsibilities through one weird trick or another.

Most sovereign citizens are drawn from the ranks of right-wing extremists, while some have come out of the back-to-the-earth homesteader movement or even Hollywood – such as actor Wesley Snipes, whose tax filings made clear he believed the IRS was an illegitimate authority.

Many adherents attend costly seminars to learn the pseudo-legal maneuvers to declare themselves sovereign citizens, and some of those instructors have been convicted of a variety of crimes related to their schemes.

Regardless of their path to the extremist ideology, there are an estimated 300,000 sovereign citizens in the U.S. – and law enforcement and extremist watchdogs believe their numbers are growing.

Law enforcement agencies and court officials have undergone training to spot the telltale signs of sovereign citizens and handle their cases.

While most sovereign citizens are merely nuisances or even harmless, they reflect an apparently increasing disregard for laws individuals determine to be unjust or unconstitutional.

The support by lawmakers and conservative media for scofflaw rancher Cliven Bundy and his sons – who, while not a sovereign citizens themselves, have expressed views that originated in the Posse Comitatus and other right-wing extremist movements – illustrates this on one level.

More organized groups such as the Oath Keepers justify their refusal to follow or enforce laws they don’t like by citing the theory of nullification – which has never been upheld in federal court – and residents of all 50 states started online petitions asking to secede to protest the re-election of President Barack Obama in 2012.

A part-time police officer from New Jersey resigned two years ago after claiming he did not have to follow the Constitution because, as he told a citizen, Obama had violated the law.

The former officer’s remarks about the president’s supposed lawlessness were similar to those made by the right-wing talk show hosts he claimed to admire on his Facebook page, and even some some Republican candidates for office openly flout laws they don’t like to fight against “tyranny.”

Michelle Fiore, the Bundy-backing Nevada assemblywoman, stirred up controversy in May by telling a local TV reporter that the Second Amendment gave Americans the right to point guns at law enforcement officers in self-defense -- although she later said she didn't mean local police, but only some federal agents.

Maine’s Republican Gov. Paul LePage met with a pair of sovereign citizen radio hosts as they discussed their legal theories and whether it would be possible to execute Democratic lawmakers for treason.

The Internet has allowed sovereign citizen ideology to spread beyond the political fringes, and many within the movement intentionally blur the lines between sovereign citizen beliefs and more commonly held anti-government views.

Sounds ominous enough, but sovereign citizens aren’t jailed for their views, they’re jailed when they put those beliefs into action and bump up against the legal system -- or worse.

(Note: This article was updated to clarify the teachings of Noble Drew Ali.)