Jon Stewart shreds GOP hypocrites who overlook Trump’s flaws: ‘I see you — and I see your bullsh*t’ 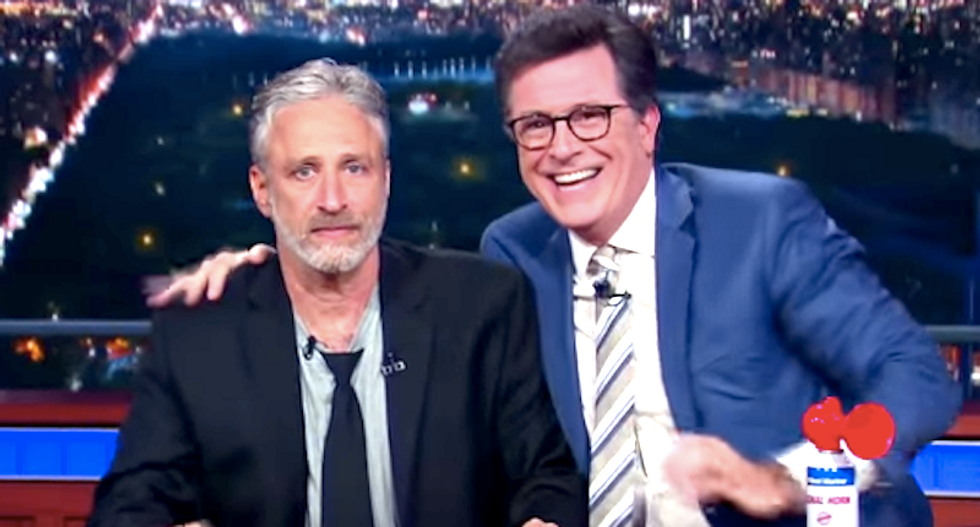 The former "Daily Show" host appeared Thursday night on "The Late Show," where he asked for his former colleague's chair to talk about the election.

"The convention's over, I thought Donald Trump was going to speak," Stewart said. "Ivanka said he was going to come out, she said he was really compassionate and generous, but then this angry groundhog came out and he just vomited on everybody for an hour."

He said the Republicans appear to have a very clear plan for America.

"One, jail your political opponent," Stewart said. "Two, inject Rudy Giuliani with a speedball enema, and then spend the rest of the time scaring the holy bejesus out of everybody."

Stewart wondered what type of gymnastics Republicans would have to perform to embrace Trump and his ideology.

"Donald J. Trump (is) a man who clearly embodies all the things they have said for years that they have hated about Barack Obama," he said.

He played a montage of Fox News anchors and conservative candidates complaining that Obama was inexperienced, divisive, thin-skinned, authoritarian and "a raging narcissist that has no grip on reality."

"A thin-skinned narcissist with no government experience? Yes, that sounds exactly like Barack Obama," Stewart said, showing a picture of Trump.

He said the conservative media would have to work constantly to justify the GOP's choice, and he wondered how they would change their viewpoint.

"Let's trace their journey through the eyes of one of their most talented gymnasts," he said, showing a picture of Sean Hannity. "His name escapes me, so let's just refer to him as 'Lumpy.'"

Stewart showed a montage of Hannity's wild claims about Obama's character and nefarious plans for society -- many of which could reasonably be applied to the Republican presidential nominee.

"If you don't like divisiveness, what about when Trump suggested that Mexico is sending us their rapists?" Stewart said, and then played a clip of Hannity excusing the comment because he didn't say "all Mexicans" were rapists.

Stewart admitted he was not an expert on civil rights history, but he is confident that most of those leaders retweeted white supremacist social media content less than Trump.

Hannity also has for years complained about Obama using a teleprompter for speeches, saying the president probably even "sleeps with the darn thing."

"Probably sleeps with the darn thing and then doesn't call it the next day because it didn't say so on the teleprompter," Stewart said.

This week, Hannity praised Trump for using a teleprompter to stay on message, which the Fox News anchor believes made him sound more presidential.

He pointed out that conservatives hated Obama for his perceived "elitism," which Hannity demonstrated by complaining about the then-candidate's "million-dollar home" and choosing Dijon mustard for his "fancy hamburger."

"Yeah, you elitist, you probably eat that burger with your mouth," Stewart said. "Instead of being like a real American and having a Magnum fire it up your ass, like they serve them at Arby's."

Hannity, however, doesn't feel the same way about Trump -- "a guy who sits in a literal golden throne at the top of a golden tower with his name in gold letters at the top of it, eating pizza with a knife and fork."

The Fox News host praised Trump earlier this year as a "blue-collar billionaire," which Stewart said was "not a thing."

"Trump does seem like the kind of guy you want to sit down and own a fleet of airplanes with," Stewart said. "All that stuff is actually superficial, and I'm sure it's easy for people without ethics or principles to embrace someone who embodies everything that they said they hated about the previous president for the past eight years, because really, for presidents, it's about what's inside, and that's where Lumpy and friends, that's where they really have found the president lacking."

"He's the type of Christian that's, you know, not Christian," Stewart said.

Hannity even questioned the pope's Christian credentials after he criticized Trump's immigration plans.

"Yeah, who died and made that guy pope," Stewart said. "Here's where we are: Either Lumpy and his friends are lying about being bothered by thin-skinned, authoritarian, less-than-Christians readers of prompters being president, or they don't care -- as long as it's their skin-skinned, prompter, authoritarian, tyrant, narcissist."

"You just want that person to give you your country back, because you feel that you're this country's rightful owners," he continued. "There's only one problem with that: This country isn't yours. You don't own it. It never was -- there is no real America. You don't own it."

"You don't own patriotism, you don't own Christianity, you sure as hell don't own respect for the bravery and sacrifice of the military, police and firefighters," Stewart said. "Trust me. I saw a lot of people on the convention floor in Cleveland with their 'blue lives matter' rhetoric who either remained silent or actively fought against the 9/11 first responders bill reauthorization. I see you, and I see your bullsh*t. I see it."

He said Republicans who oppose equality for all Americans -- even those who Rep. Steve King (R-IA) consigned to "subgroups" -- should take their concerns to the Founders.

"Those fighting to be included in the ideal of equality are not being divisive," Stewart said. "Those fighting to keep those people out are. So Lumpy, you and your friends have embraced Donald Trump. Clearly, the C next to your names don't stand for constitutional or conservative, but cravenly convenient --"

Stewart was unable to add the profane noun he presumably intended to apply, because Colbert interrupted him with an airhorn.