Seth Meyers has an epic reality check for Bernie diehards: 'This country is 48 percent crazy uncles' 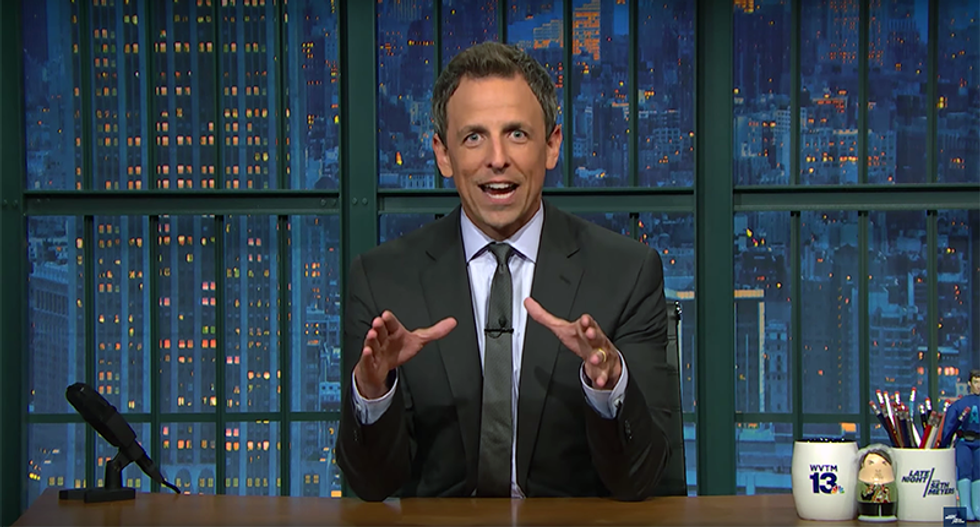 "Bernie-or-Bust" protesters have spent the Democratic National Convention booing everyone from genuine anti-Bernie Sanders people like Debbie Wasserman Schultz to Democratic legends like Elijah Cummings and Elizabeth Warren, or even Sanders himself. Twice.

While protesters say that they're only booing mentions of Hillary Clinton's name, the way that it comes off is that they're booing civil rights legends, feminists icons and progressive heroes. It's not being well received by anyone, including Sanders and many of his supporters.

"Late Night" host Seth Meyers to explain why this isn't exactly the best or most logical route in a segment he called, "Hey!"

"We don't have time for this," Meyers argued. "Donald Trump is ahead in the polls. The house is on fire. Stop crying because we're not putting it out with your hose."

Snapping his fingers and asking people to pay attention, Meyers continued that America is on the cusp of electing a racist fanatic, and let's be realistic, that isn't going to end well for any of us. "I don't know which class you ditched to go to those Bernie rallies but I have a feeling it was history. You're like a Cavaliers fan who goes to the game and boos when LeBron dunks with the wrong hand."

Meyers repeated an often justification used by "Bernie or Bust" supporters, that they don't know anyone planning on supporting Trump. "Did you ask everybody in your yoga class?" Meyers asked. "Did you check with the entire drum circle because guess what: You know you have that crazy uncle you only see at Thanksgiving? Well, this country is about 48 percent crazy uncles and it's about to be Thanksgiving all day, every day." He continued with an apocalyptic prediction that in the land of Trump, no one will get gravy in that scenario. "Trump gets all of the gravy!"

If that isn't enough, Meyers urges Sanders supporters to think about the toll this will have on Sanders himself. "Because of you, Bernie is going to have to campaign for Clinton every day until Election Day, and he shouldn't have to do that. One, because he hates her. It's just, unlike you, he's adult enough to pretend he doesn't. Two, Bernie should be on a well-earned vacation just sitting on a stoop, drinking cream soda and yelling at people to put their garbage in the trash can."

Meyers even slammed people who wore tape over their mouths reading "silenced" but who still managed to give tons of interviews to the press. "One or the other! Tape or talking! You can't do both!" he exclaimed.

He went on to explain he understands the disappointment that supporters face, no one understands it more than Sanders himself. "I couldn't get Rhianna to go out with me, but I don't stand in the kitchen and boo my wife. At least not while she's telling me she's got plans to make my life better."

Check out Meyers' full video below: