Donald Trump is not a normal American presidential nominee, and there has been very little normal about the Republican convention that has now officially confirmed his nomination.

Trump’s defining attributes have always been intemperance, divisiveness and indiscipline, so it should surprise no-one that “his” convention was so intemperate, divided, and close to outright farce.

But however “eventful” the convention might have been, Trump’s formal nomination was always to be the centrepiece of the occasion. With due respect to the cast of reluctant colleagues, relatives and d-list celebrities spread out over the days before, Trump was always centre of attention.

Likewise, it was during his acceptance speech that the largest part of the general public tuned into proceedings – many perhaps paying full attention to the campaign for the first time.

For his committed supporters, meanwhile, Trump played exactly the tunes they wanted to hear, his performance coloured by a dark intensity. He painted a bleak (and inaccurate) picture of an America overwhelmed by violent crime, before declaring himself “the law and order candidate” and promising that upon his election “safety will be restored”.

He told tales of Americans tragically killed by illegal immigrants, affirming one of his longest-standing pledges: to build a “border wall” and find and deport those already illegally in the country.

He blamed his Democratic opponent Hillary Clinton, who served as secretary of state during president Obama’s first term, for the rise of Islamic State and other agents of radical militant Islamism. Lamenting that “America is far less safe and the world is far less stable” than it was when she took charge of US foreign policy, he reassured the crowd that he would “defeat them fast” if he were elected.

He warned of the threat of terror attacks in the US, but pledged to neutralise them in part by suspending immigration from any country “compromised by terrorism” – without specifying what countries this would include.

And he extended sympathy to the plight of workers whose jobs had been taken away by “disastrous” trade deals, promising to get rid of current “bad” agreements with the likes of China and replace them with “great” ones instead.

In short, Trump used his address to stoke fear, to blame his political opponents for that which is frightening, and to offer himself as the singularly capable agent of change and renewal demanded by the times.

Scorning any imperative to offer realistic solutions to the problems he railed against, Trump delivered a clear pitch: that, flying in the face of a “corrupt” establishment, he alone can speak for the “forgotten” working men and women who have suffered at the hands of a “rigged” system. “I am your voice!” he proclaimed.

As the blogger Andrew Sullivan summarised it: “Everything is terrible. I alone can solve [everything]. Just don’t ask me how.”

A crisis in waiting

That Trump should present himself as the candidate of law and order is darkly ironic, since his campaign has provided ample evidence that in office he would be a threat to both.

Even many on the right have questioned whether his proposal for a ban on immigration by Muslims is constitutional. He has threatened to use the law to curb media organisations that subjected him to unfavourable reporting. He has encouraged violence against protesters at his rallies and offered to pay the legal fees of those who commit it (not reassuring in someone who if elected would acquire the power of presidential pardon).

In his discussion of foreign policy, he has demonstrated at best ignorance and at worst active hostility to the institutions and arrangements that underpin the liberal world order. He has said that he would order those under his command to commit torture and war crimes in pursuit of his security policy. He has, in effect, threatened to mount a trade war against China and others. 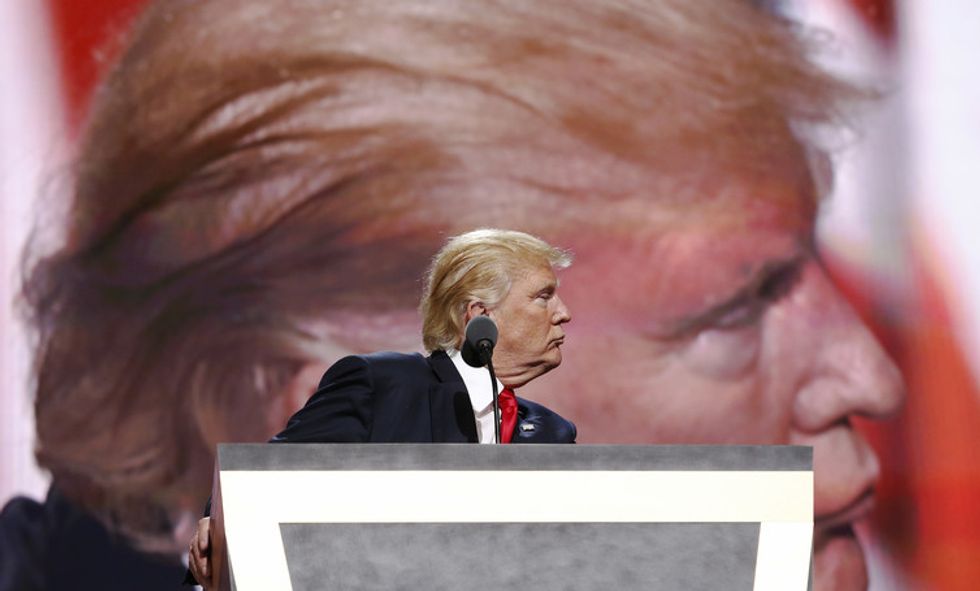 He has suggested that the US might not live up to its security commitments to Europe under NATO, while cultivating mutual admiration with Vladimir Putin, Russia’s authoritarian strongman.

His discussion of the national debt and how he might seek to renegotiate it suggests a dizzying ignorance of the rudiments of how national and international economics work.

In short, if Trump wins, a major global crisis – whether economic or military, and whether caused by design or by cluelessness – would become dramatically more likely.

One of the most disturbing themes of the convention was the sheer venom with which Trump Republicans attacked Hillary Clinton, whom they regard as not merely a political opponent but a criminal. And not just a petty one; in Trump’s phrase, she is guilty of “terrible, terrible crimes” that have been swept under the carpet by a corrupt FBI.

“Lock her up” was an enthusiastic chant, reappearing during Trump’s speech but originating in New Jersey governor Chris Christie’s audition for the job of Attorney General in a Trump administration, in which he staged a mock show-trial of Clinton for supposed crimes ranging from corruption to “bad judgment” skirting the edges of treason.

As others have noted, demands for the jailing of opponents do not form a normal part of politics in a healthy democratic society, and for good reason. That they are now the stock-in-trade of a major party’s nominee speaks to a serious erosion of the US’s liberal democratic norms.

Experts are uncertain about just what has to happen at a convention to benefit the nominee, but this was an especially unedifying week, with enough unpleasant surprises and unforced embarrassments to give any professional political stage manager an ulcer.

And Trump, obliged to adhere more closely to a fixed script than in his free-associative primary-night rants, was at times strained and halting in his delivery. But we won’t know how it has been received by the public until the first post-convention polls come in.

Whatever they say, the most important point is abundantly clear: Trump is a terrifying candidate.

He is skilled in the dark arts of fear, agitation, and insecurity; he is duly marketing himself as an avenger of law and order to meet the demand he has inflamed. His constituency is shockingly large. But a Trump presidency would be a greater danger to American security than any threat it proposes to address – perhaps even an existential threat to American democracy itself.