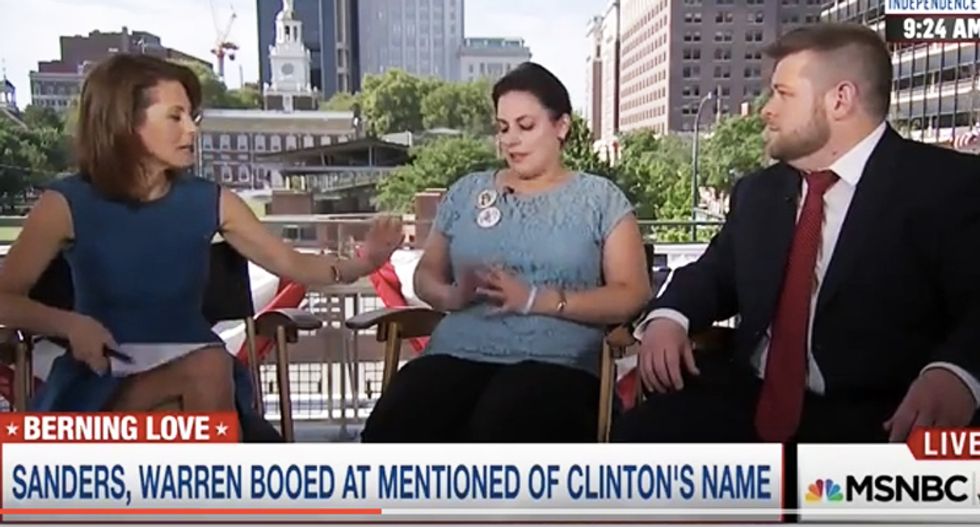 During a discussion Tuesday morning with two Sanders delegates from Iowa, an MSNBC host patiently but firmly explained that there was no way mathematically that Bernie Sanders would be the Democratic nominee despite their insistence that he is "still a candidate."

Host Stephanie Ruhle first asked delegates Kate Larson and Jason Brown if they thought it was "disrespectful" for some of the Sanders delegates to begin booing during the opening prayer.

"Actually I thought it was pretty disrespectful to have the prayer have an endorsement for Secretary Clinton," Brown replied only to be cut off by Ruhle.

"But technically not yet," Brown parried.

As Larson began to say something, Ruhle put up her hand and said, "Hold on a second."

"Mathematically it as impossible today as it was weeks ago for Bernie Sanders to get the nomination," Ruhle firmly explained. "So why would it say -- technically, this is Hillary Clinton's show. Bernie Sanders himself asked you last night to step down. Sarah Silverman, who is a Bernie or bust, said 'You are being ridiculous.' So help me understand, what's the point?"

"I was not one of the people booing," Brown replied. "And Senator Sanders did win the majority of caucus votes in our district."

Ruhle cut him off again.

"Bernie Sanders, he built the fire, he lit it. And now he's saying 'guys, time to put it out.'" Ruhle stated, with Larson saying she believed Sanders told them to keep fighting.

"For Hillary Clinton. He said that last night," Ruhle explained to her.

Watch the video below, via Mediaite: