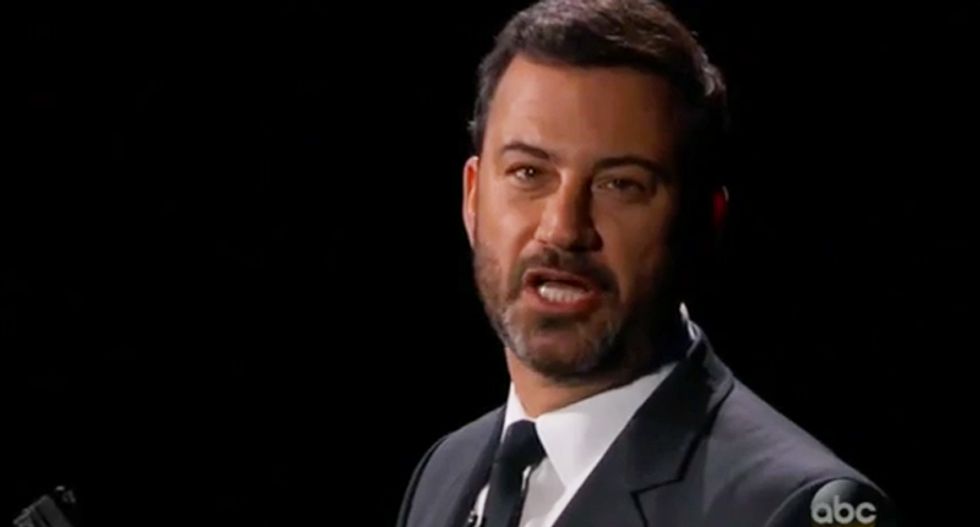 "I've found myself smack-dab in the middle of an online conspiracy theory, " Kimmel began as a way of explaining the latest from Jones' ridiculous InfoWars website.

"As you know many of Hillary Clinton's opponents have been questioning whether she's healthy enough to be president," Kimmel continued. "So when she was here, I challenged her to open a jar of pickles to see if she was strong enough to do it. And she did and all hell broke loose. Thousands of people, maybe even millions, are convinced that I somehow rigged the pickle jar."

"For real, I'm not kidding!" Kimmel said before pointing the finger at Jones and his website for hyping up "pickle-gate" as if it somehow proved Clinton was unqualified to become president.

After sharing a clip of Jones attempting to open a jar of pickles to prove how hard it is -- as well as get the "pop" that comes from an unopened jar -- Kimmel mocked the Jones.

"There are people in the pickle industry who don't devote this much time and energy talking about pickles," Kimmel said. "And really it's just a matter of time before the pickles jar gets subpoenaed."

Addressing Jones specifically, Kimmel remarked, "You just had to keep digging, didn't you Alex?  The plan was so simple, all Hillary had to do was open the jar of pickles and the White House would be all ours. Mine and hers. We had it all worked out. This went all the way up to Vlasic."

With that, Kimmel felt compelled to kill the jar of pickles -- by shooting it with a gun onstage so it couldn't spill the beans -- telling Jones, "The juice of these pickles is in your hands.

“If you’re ever feeling bad about your job,” Kimmel concluded, "just remember there’s a grown man who spent a full seven minutes yelling about me and a pickle jar on television."