Katrina Pierson laughs off Trump's 'irresponsible' comments: 'He should be joking and having fun!' 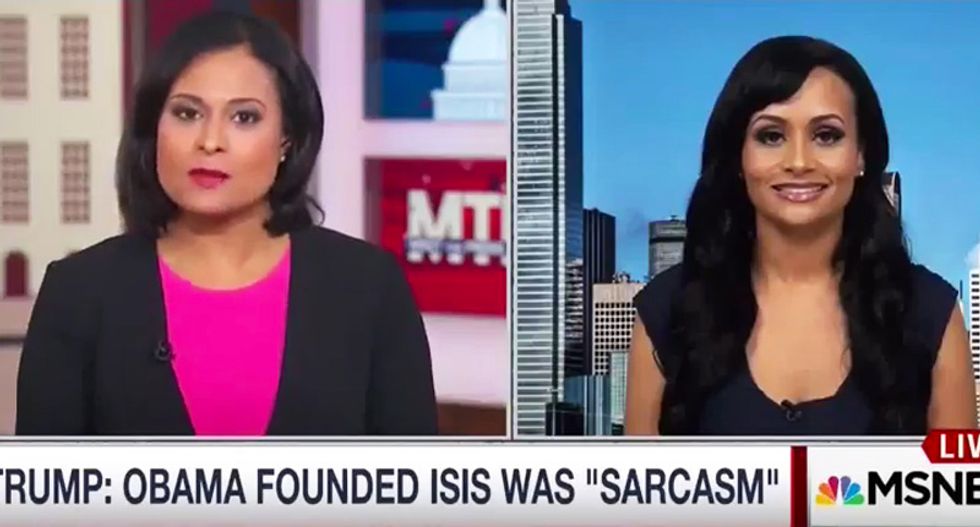 MSNBC’s Kristen Welker suggested that perhaps a candidate for president of the United States ought to be a little more serious about issues of terrorism and national security on her show Friday. But Republican presidential candidate Donald Trump's spokesperson Katrina Pierson said, "of course he should be joking and having fun!"

Welker alleged that Trump's recent comments about President Barack Obama being the founder of the terrorist group ISIS simply added to a list of frequent outrageous outbursts and unpredictability.

Pierson argued that any time the media has push back on Trump's shocking and bizarre statements like asking Russia to hack Clinton or saying he could shoot someone on Fifth Avenue and still get elected, it was "people with an agenda trying to push that agenda."

“You can’t sit there and say you think Donald Trump was actually talking about shooting someone on Fifth Avenue or actually telling Russia to go hack someone,” she proclaimed, before trying to talk over Welker.

Yet, when Pierson appeared on "The Kelly File" in July, she assured the Fox News host that Trump wasn't joking. "Well it wasn't really a joke, per se," she said. "It was more tongue-in-cheek, like we've been saying simply because that is the issue."

“As someone who wants to be leader of the free world, should he be making sarcastic comments about issues that are this serious?” Welker asked. “Terrorism, Russia hacking another candidate for president. Is that responsible?”

Pierson tried to change the subject before ultimately proclaiming, “Of course he should be joking and having fun!”

Trump has since said that his comments weren't sarcasm, as he claimed they were before.