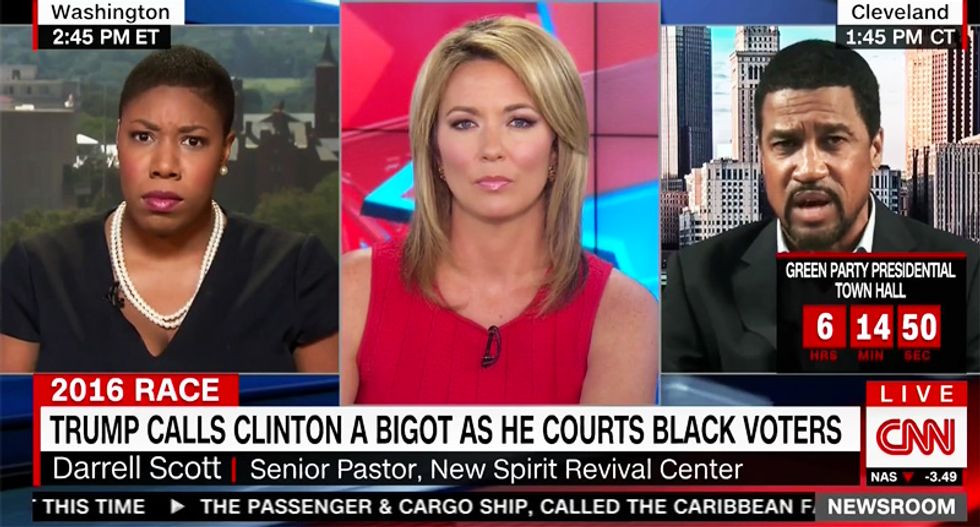 Appearing on CNN Wednesday afternoon, one of Donald Trump's most vociferous supporters attempted to explain his continuing horrific polling numbers with the African-American community, saying black people are unable to tell satire from the truth.

After an attempt to link Democratic presidential nominee Hillary Clinton to white supremacists -- which stunned host Brooke Baldwin and Democratic strategist Symone Sanders -- Pastor Darrell Scott took a stab at explaining how black voters have come to mistakenly believe that Trump is a racist.

"The thing that kills is this," Scott began. "Black people believe satire, black people believe parody. I mean I had a guy that I considered to be a very intelligent person, send me a headline from a satire website that said that Donald Trump plans on deporting all African-Americans back to Africa -- and be believed it!

Host Brooke Baldwin tried to get back to actual problems with the Trump campaign, saying, "Let's not talk about satire, let's talk about reality."

The CNN host pressed Scott to address Trump's comments following the disturbances over the weekend in Milwaukee -- when police and the African-American community battled following the shooting of a black suspect -- and Trump's lack of engagement with black communities.

"Well, one thing that I know Trump tries not to be is reactive," Scott replied as guest Sanders tilted her head and smiled. "And so he's not reactive in his responses."

"You know, Trump's appeal or his engagement with the community is on a larger scale than the average politician," he continued. "Trump can't walk down the street shaking hands and kissing babies. It would be a madhouse."