Scottie Nell Hughes laughed off CNN: 'If your candidate learns some policy we'd have a solution' 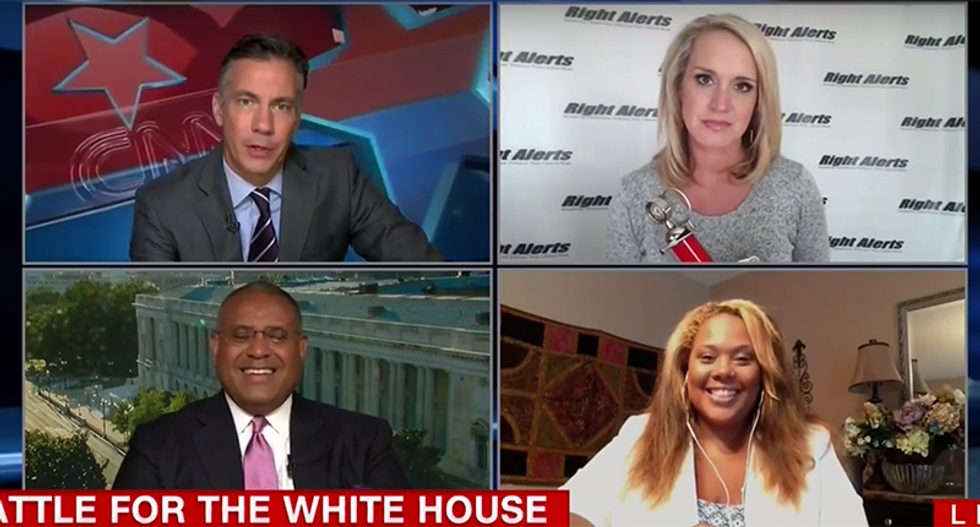 Republican commentator Tara Setmayer called out Trump's switcharoo by citing an earlier position to deport DREAMers and rescind President Barack Obama's executive orders for immigrants. She alleges that Trump surrogates are spinning themselves into knots trying to swear that their candidate hasn't changed his position, but it's nothing more than BS.

"He's built his entire campaign around this idea," she said. "He separated himself from Jeb Bush, Marco Rubio and John Kasich by this idea of 'get everybody out.' Right now, he sounds just like Jeb Bush and Marco Rubio."

When asked if Trump was changing his position by CNN host Jim Sciutto, Hughes, seemed to lead the conversation on a journey around the details Trump has always advocated around E-verify and other specifics. She maintained that his position has never changed.

Setmayer and Scott Bolden outright laughed at Hughes as she continued to ramble.

"Yes or no!" Setmayer demanded. "You're just going around and around! Just say yes! You're not going to like spontaneously combust if you admit your candidate changed his position!"

Bolden called BS on the entire thing. "Whenever you debate the Trump team you ask them if he's changed his position. They say, 'No, he's evolved.' You take them to the tape or the ten video tapes where he's said he's softened, he's going to have a deportation force, he's going to support Operation Wetback from the 1940s and you go back to them and they say, 'Hey didn't say that!' or 'He said something different!' or 'You don't understand.' Like, should I believe them or my lying ears or my lying eye, as my grandmother use to say. It actually makes no sense what so ever."

"It's a seismic shift! This was a core value!" Bolden continued. "It's one thing to pivot, to explain and evolve," but he said it's another to change your entire position.

"Would a pivot be acceptable?" Sciutto asked, curious if the word would work to describe Trump's new position. Hughes said that it was more about what Congress would consider acceptable in terms of legislation.

"Condescending laughs have no place right now," Hughes said as Bolden and Setmayer continued to laugh.

"Oh, Scottie, get over it, please. If your candidate would learn some policy we would have a solution. It's been 15 months and he still doesn't know what he's doing and that's the concern," Setmayer slammed.

Hughes fans followed her appearance with complaints that the two panelists were "rude" to Hughes.