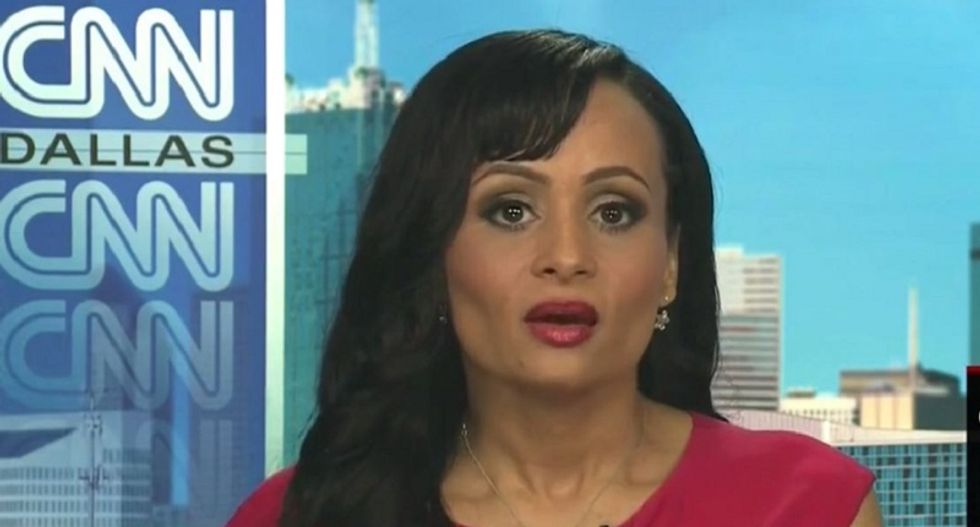 Donald Trump campaign spokesperson Katrina Pierson hasn't been on television since her nightmare week of catastrophic appearances in mid-August. She even got thrown under the bus by Trump's son Eric Trump, who said, "it's so ridiculous I can't even watch it."

Thursday, however, Pierson returned to CNN and was laughed at by other GOP guests, and forced to admit her candidate has no verifiable evidence that Hillary Clinton is a bigot.

"Would it not be more effective to go after the policies she said are oppressive?" host Erica Hill asked. "To go after the things that the Trump campaign would like to point out in their eyes are not working on Hillary Clinton's side, as opposed to name calling?"

Pierson struggled to come up with a valid answer, resorting to the claim, "the people know what he's saying." She cited the last few policies speeches that Trump has given, which certainly attack President Barack Obama's policies and ties Clinton to those, but neglected to justify the recent position that Trump has taken that Clinton is a bigot.

"Particularly, Hillary Clinton goes out there and panders, she goes on a radio show and talks about having hot sauce in her purse. That's pandering," Pierson said. "And Mr. Trump sees this as an opportunity to show Americans he's not your typical Republican. A Republican that has not gone into the communities, because, I want to remind everyone, Mr. Trump, this March, went to Chicago. He went to take his message to the community and what we saw was destruction. That's part of the reason he's speaking to the public at all of his rallies."

Pierson is referring to a rally that Trump was scheduled to hold in Chicago, but was canceled after protesters clashed with Trump supporters. Trump later called those "people in the community" thugs. The tensions were high after a number of African American rally attendees were beaten, punched or verbally assaulted at Trump rallies.

Hill then cited Clinton's recent statements that Trump is leading a "hate movement" and taking it "mainstream." Clinton supporter Tharon Johnson agreed that Clinton has got to get back on message about issues that the black community faces, specifically citing college affordability, education and her plan to strengthen the middle class.

When the conversation turned to Trump's sudden shift in his immigration proposals, Pierson tried to spin that there has been no shift, they're just changing the language.

"He hasn't changed his position. He has changed the word he is saying," Pierson explained.

"Katrina, he has said get them out," Hill said. "This is a shift, a flip-flop, whatever words you want to use."

"No, Erica, it is how it's being discussed now," Pierson attempted to explain. "He said if they're here illegally, they'll have to go."

"Deportation force," Hill countered. "So, now he is shifting. Katrina, there is a definite different message that we're hearing now."

"There is not a different message," Pierson promised. "He is using different words to give the message because everyone on the news is saying that he is a bigot and that he is a racist because of the words he uses. Now he is simply saying yes, we're going to follow the law, enforce the law, which ICE is immigration and customs, they do remove people from the country here illegally. He wants to start with the criminals."