Senator ridicules Trump's smears: You could say he 'and his friend Putin are the founders of ISIS' 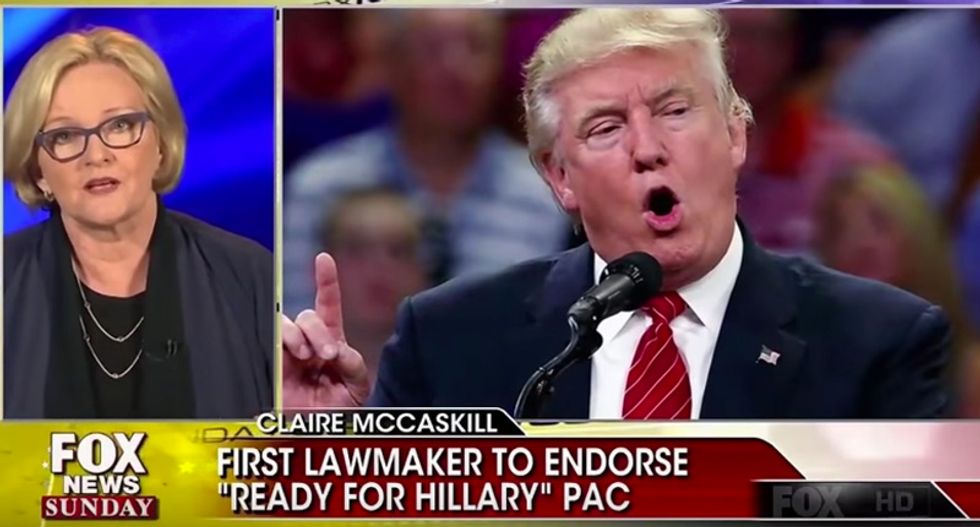 In an interview with Chris Wallace on Fox News Sunday, Missouri Sen. Clare McCaskill (D) flipped the script on Donald Trump, saying the GOP presidential nominee and his "friend" Vladimir Putin could be considered the founders of terrorist group ISIS.

Trump has taken heat for stating days ago that President Barack Obama is the "founder" of ISIS, and the comments have roiled his campaign, with Trump spokesperson Katrina Pierson doubling down on Saturday stating that Obama also invaded in Afghanistan.

Which is equally incorrect.

McCaskill immediately explained why Clinton and Obama pulled the troops out of Iraq -- which Trump believes led to the rise of ISIS -- while getting in a snarky dig at the GOP nominee.

"There are a lot of reason why ISIS rose up. There is the Status of Forces Agreement known as SOFA that Bush negotiated. We couldn't leave our troops in Iraq even if we wanted to because parliament in Iraq was refusing to give them immunity," she remarked.

"Now, Trump probably thinks the SOFA, the Status of Forces Agreement is a gilded couch at Mar-a-Lago," she added in reference to Trump's luxury hotel in Florida.

McCaskill wasn't done, pointing out Syrian President Assad's responsibility for the rise of ISIS with the assistance of Russian strongman -- and Trump admirer -- Vladimir Putin.

"You can say Trump and his friend Putin are the founder of ISIS, which would probably be more accurate than calling out the commander-in-chief in that way,” she concluded.

Watch the video below via YouTube. Comments about Trump begin at 7 minute mark: