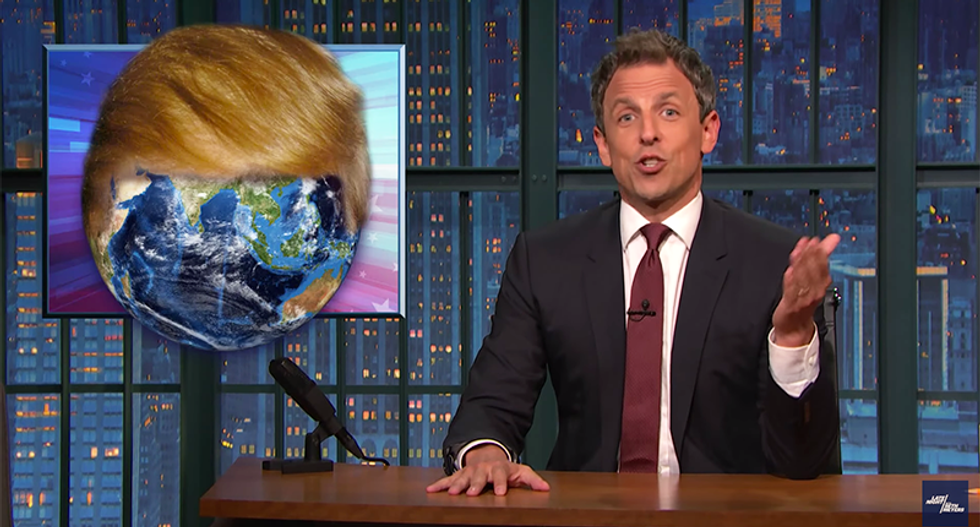 Seth Meyers is scared the earth is the Trump of planets (Photo: Screen capture)

Once in every 500 years, a flood happens like what happened in Baton Rouge, Louisiana, where two feet of rain fell on the area. But we've had eight 500-year events in the last 12 months in the United States. It's enough to scare the hell out of Seth Meyers and prompt him to ask why no one is talking about it in the presidential race.

"Eight events have happened in the last year that are only supposed to happen every 500 years!" Meyers said, gesticulating wildly. "So, with everything going on it's insane that climate change isn't one of the biggest issues in the presidential campaign. The Earth is acting insane, but we're too busy focusing on Donald Trump to notice. Meanwhile, the Earth is currently the Donald Trump of planets. They even use Trump's skin tone to illustrate extreme heat," he said, showing an orange temperature map.

Just this summer, the Earth marked the hottest month on record. Local meteorologists can only hint at the impending doom. "Something to think about," is all one could say on WEDF News.

"I don't know. Seems like something more than, 'Something to think about,'" Meyers said. "But I guess a local meteorologist can't say, 'Something to keep you awake at night as you ponder a future in a slowly dying planet. Now over to Kevin with sports."

The news that we're all wiping our feet on the welcome mat of hell isn't exactly the most positive story. Even Al Gore, who loves talking about climate change, called the “truth” an “inconvenient” one.

But Republicans overreact with outrage when people try to talk about climate change. Meyers showed clips of Fox News guests claiming that GOP presidential candidate Donald Trump cares about defeating ISIS while his Democratic rival only cares about defeating weather. Evidently, the United States can only do one thing at a time.

But when we think about the GOP's climate denial it's a lot like what happens when a Trump surrogate is confronted with their candidate's limp polling numbers. They simply refuse to believe it or admit it. "Says who?" Trump's lawyer Michael Cohen said on CNN.

"'Says who' is basically the Republican Party's official position on climate change. And this anti-intellectualism is at the core of the modern GOP and goes all the way to the presidential ticket," Meyers said.

He cited Trump's mockery of climate change. Trump went on a rambling rant about his hair and the hairspray he has to use isn't as good because it affects the ozone layer. "I'm sure the coal miners were like, 'Ha, ha, yeah, hairspray is our biggest problem, too, here in the coal mining community,'" Meyers continued.

Even when pressed on the issue, Trump proved he has no idea what he's talking about. In an interview earlier this month, he talked about the climate going up and down and made waving motions with his hand. "He's like a kid who forgot to put together his presentation for science class. 'Uh, the weather, it goes like this. And then sometimes it goes like this too, really, it could go either way. Anyway, that's my report.'" Meyers said, making a wave with his hand

Of course, when Trump was dealing with his Ireland golf course, Trump believed in climate change and put in place a large sea wall to protect the property.

"In the end, the climate is doing literally everything it can to get our attention. The climate is acting like a housewife in lingerie, standing in front of the TV and we're all just going, ‘Honey, move, I can’t see what “The Mentalist” is doing.' It's not going to be easy, but we should do whatever we can to save our planet," Meyers closed.